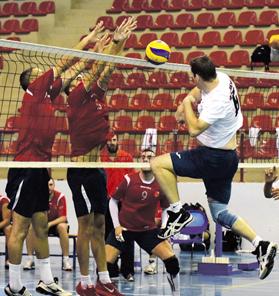 Four teams will be vying for the honours in the men’s volleyball competitions this season. Photo: Mark Soler

Preparations ahead of the Malta Volleyball Association (MVA) competitions for season 2015/16 are in their final stages.

The forthcoming campaign will see no fewer than ten teams taking part in the women’s league which starts with a round-robin competition. The sides will then be split into two categories – the Super League and First Division.

Significantly, this season will also see the return of the Men’s League after an absence of one year. Four teams will be taking part.

Since the elections in June, the new committee, led by president Jesmond Saliba, increased their efforts to bring all clubs together and play a leading role in the running of the sport.

“The new executive council has worked hard to bring all local volleyball clubs on board, adopting open lines of communication in order to ensure that nobody felt left out,” Saliba said in a statement.

“We are satisfied with the number of clubs taking part in this year’s competitions plus the fact that the men’s National League will be taking place again.”

The MVA president added that the council was also looking forward to developing its youth categories, “a sector which this administration considers a priority”.

Saliba explained that apart from the respective leagues, the MVA will be organising other competitions throughout the season.

These include the John Bugeja pre-season tournament, currently underway, the Christmas Tournament and National Cup in April.

Another important development that should enhance the quality of this year’s competitions is the setting up of the Malta Volleyball Referees Association (MVRA).

This sector will be responsible for the ongoing training of match officials and their allocation to control local matches. The MVRA recently organised the first of a series of refereeing courses for beginners and refresher courses for existing referees.

This exercise will be held on a regular basis, the MVA said.