MEPs on a fact-finding mission to Malta found a "perception of impunity" which was fuelled by an apparent unwillingness to investigate and prosecute key cases, the delegation chair said on Friday. 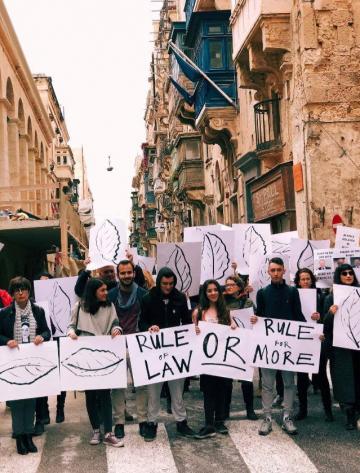 Led by Portuguese Socialist MEP Ana Gomes, the delegation came to Malta to look into rule of law concerns, following an EP debate and resolution in the wake of the murder of journalist Daphne Caruana Galizia.

Ms Gomes told the press that reluctance by some respondents to answer questions put to them - the Prime Minister's chief of staff Keith Schembri read out a prepared statement, while Nexia BT partner Brian Tonna "never showed up," she said - was "extremely disturbing, because it fuels the perception of impunity."

Watch: Activists protest as MEPs near end of visit

She endorsed a statement made by her delegation colleague and Green MEP Sven Giegold, who told the press that he left Malta "more concerned about the rule of law than when I arrived."

When asked whether she shared that assessment, Ms Gomes said the entire delegation did.

Mr Giegold singled out the police force for criticism, saying that he had left a meeting with top police officials feeling that there was a "high degree of unwillingness to investigate as well as incompetence."

Ms Gomes expressed alarm that revelations in the Panama Papers had not led to prosecutions, and a minister involved had actually kept his place in cabinet even after the general election in June.

The police commissioner and Attorney General, she said, had adopted a "very restrictive" interpretation when deciding not to push forward with investigations into the matter.

The delegation is now expected to continue its investigations in Brussels, with the possibility of inviting Maltese officials there to answer questions.

The MEP delegation noted various concerns about Malta's political system and governance. Key among them:

Can't see the video? Watch the press conference in full using the video on our Facebook page.