Speaking during a visit to MOAS's rescue vessel the Phoenix by Archbishop Charles Scicluna today, Mr Catrambone said people tended to externalise migrants, viewing them as a problem, just not their own one.

Similarly, the work being done by MOAS to rescue lives could be viewed as something distant from Maltese lives, and therefore less important.

Despite this, the philanthropist said he and his family had been welcomed into Maltese society openly, and his migrant rescue endeavours had been supported through generous donations from the Maltese people. 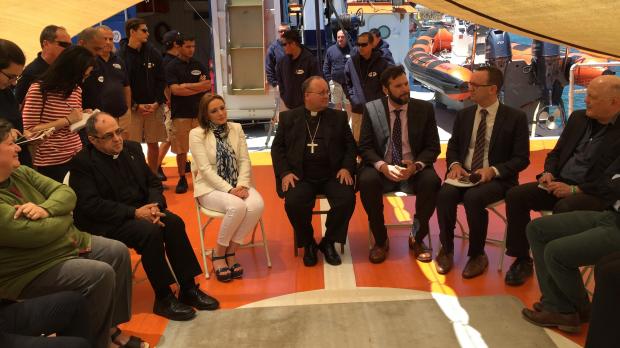 During the visit, Mgr. Scicluna christened the Phoenix a "ship of mercy". This year being the Holy Year of Mercy, the archbishop said the MOAS was constantly engaged in acts of mercy.

Today's event was organised by the Archbishop's Curia in collaboration with MOAS, to mark the World Communications Day.

"I am here commemorating the visit by Pope Francis in the island of Lesbos and to pass on his message that communication is the essence of mercy," Archbishop Scicluna said.

The Archbishop drove home the point that mercy "has to be concrete. It is not something we just talk about," as he called on the Maltese to be "protagonists in a culture of compassion and solidarity."

MOAS is a Malta-based foundation dedicated to preventing loss of life by providing professional search-and-rescue assistance to refugees and migrants in distress at sea.

Its Phoenix will embark on a new mission in the central Mediterranean next month.