Police in the western city fired water canon to disperse protesters from the anti-Islamic PEGIDA movement, which has seized on the alleged involvement of migrants in the New Year attacks and stepped up its calls for a halt to the influx.

Nearly two dozen asylum seekers were among those suspected of carrying out the attacks, police said this week, heightening tensions over immigration and fuelling criticism of Merkel's refusal to place a limit on the numbers of migrants entering the country.

"The right to asylum can be lost if someone is convicted, on probation or jailed," Merkel said after a meeting of the leadership of her Christian Democrats (CDU) party that was overshadowed by the attacks in Cologne and other cities.

"Serial offenders who repeatedly rob or repeatedly affront women must feel the full force of the law," Merkel told journalists in Mainz, promising a reduction over the longer term in the flow of migrants to Germany.

The right to asylum can be lost if someone is convicted, on probation or jailed

The remarks were in stark contrast to her earlier optimism about the influx to Germany, which has taken in far more migrants than any other European country. Her welcoming stance and 'we can do it' slogan irritated many Germans, uneasy about the arrival of some 1.1 million migrants last year.

Under German law, asylum seekers are now typically only deported if they have been sentenced to at least three years in prison, and providing their lives are not at risk at home. 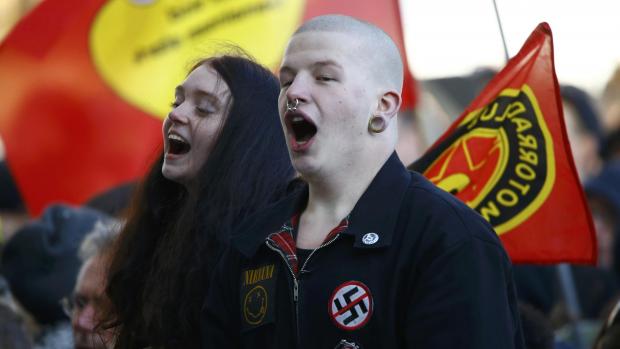 In Cologne, riot police fired water canon at PEGIDA protesters after some threw firecrackers and beer bottles at officers, a Reuters witness said.

Two people were injured in the clash, and police made a number of arrests.

Police had called on demonstrators, some of whom had chanted "Merkel must go", to return to a square near the city's train station, from where they had set out on a march through the city.

A police spokeswoman said the PEGIDA protest had attracted some 1,700 people, half of whom she described as coming from the 'hooligan scene'.

"Rapefugees not welcome," one banner read.

In all, about 1,700 police officers were on the streets of Cologne, where more than 3,000 people attended the PEGIDA rally and a rival demonstration.

The overall police presence dwarfed the number on duty on New Year's Eve, when at least 120 women were robbed or sexually molested amid scenes of widespread chaos.

At a separate left-wing protest, a group of mostly women gathered close to the train station where many of the assaults happened.

"No means no. Keep away from our bodies," read one sign held by a demonstrator.

Merkel's conservative party said it wanted to reduce and control migration to Germany, and send those who had been refused asylum home promptly.

"We want to reduce the hurdles for the deportation and expulsion of foreigners who have committed a crime," the party said in a statement. Such a move would require a change to German law.

Earlier in the week, German federal police said they had identified 32 people who were suspected of playing a role in the attacks on women on Cologne, 22 of whom were in the process of seeking asylum in Germany.

They documented 76 criminal acts, most them involving some form of theft, and seven linked to sexual molestation.

Of the suspects, nine were Algerian, eight Moroccan, five Iranian, and four Syrian. Three German citizens, an Iraqi, a Serb and a U.S. citizen were also identified.