Gozo’s Mgarr ix-Xini has been named by CNN as one of 10 places which should be visited before they change for ever.

It shares the feature which remote Greek islands, Managua in Nicaragua, St Helena, St Vincent and the Granadines, Reydarfjordur in Iceland, Victoria Fallsa (Zimbabwe), Antarctica, Cuba, and Solden in Austria. 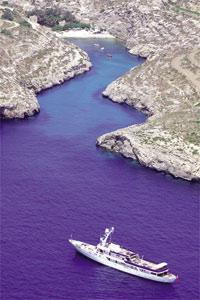 May 2007 - The tranquil seclusion of Mgarr ix-Xini in Gozo was one of the spots where French President-elect Nicolas Sarkozy spent time in relaxation. Photo: Victor Mercieca.

About Mgarr ix-Xini, the broadcaster remarks that with Angelina Jolie’s upcoming film By the Sea set in Gozo, visitor numbers are expected to rise after the film comes out later this year.

It also points out that Gozo is dotted with beautiful churches, one of which is the world’s third highest unsupported dome. It’s also a great destination for hikers, cyclists and divers.

Mgarr ix-Xini was also in the international media when French president-elect Sarkozy stayed on holiday on a yacht there before taking office for his first term – many agencies carried aerial pictures of the yacht off the fjord-like cliffs.
http://edition.cnn.com/2015/03/23/travel/places-to-see-now/