This is part two in a two-part series. Read part one.

The life and work of Żabbar parish priest Joseph Zarb who played a pivotal role in the coronation of the titular painting of Our Lady of Graces 70 years ago.

The feast of the coronation of the titular painting of Our Lady of Graces took place between August 26 and September 9, 1951. Two band clubs were present every day and there were fireworks on each occasion. One anecdote is that, since the provision of electricity was limi­­ted during that time, lights in the Cottonera area were turned off to guarantee enough power supply for the festivity.

The solemnities for the coronation were unmatched before and after the event.

On September 1, the first motorcycle pilgrimage took place and, on September 2, the titular painting was crown­ed with much pomp. Mgr Michael Gonzi was assisted by five other bishops ‒ Galea, Pace, Baranzini, Bentivoglio and Cala­bretta ‒ and accompanied by the chapters of Birkirkara, Cos­picua, Vittoriosa and Rabat. 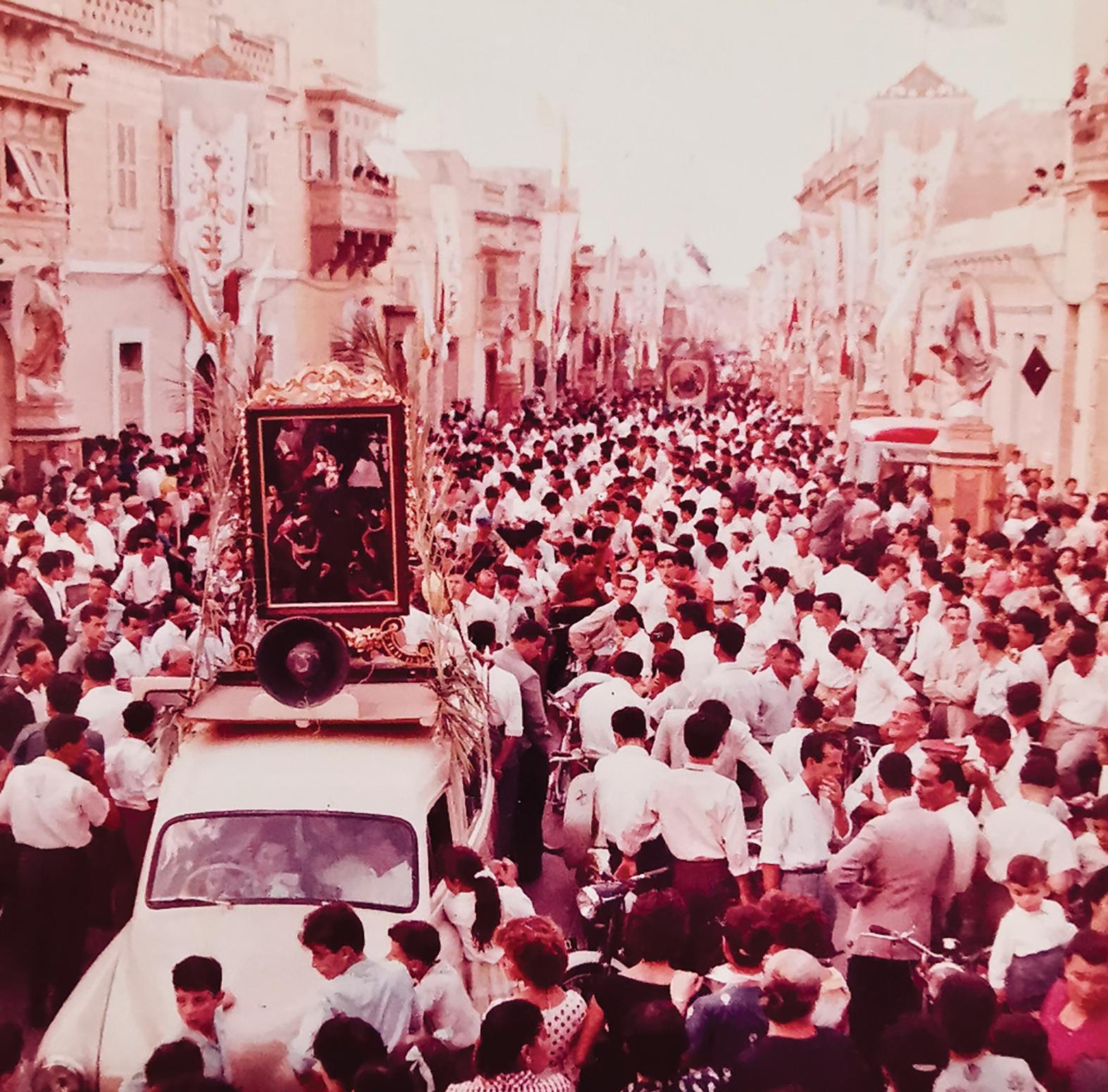 The first motorcycle pilgrimage on September 1, 1951.

Earlier that day, a contract drafted by John Micallef Trigona was signed, binding Zarb and his successor to maintain the two crowns of Our Lady and Jesus on the titular painting.

On September 7, 1952, two inscriptions were set in place underneath the sanctuary’s portico to commemorate the coronation. The Polloni stained glass windows, depicting St James the Less, St Joachim, St John the Baptist, St Zachary, St Anne, King David, St Joseph and St Elizabeth, were finally set in place. The Polloni company was led by Guido Polloni, assisted by his son-in-law, professor Sergio Pappucci. So, too, was the Circolo of the female section of the Catholic Action and the Żabbar Sanctuary Museum, which was built and opened by September 5, 1954. On September 6, 1953, a small effigy of Our Lady was set over Żabbar Gate. Another was placed on Hompesch Gate on September 4, 1955. 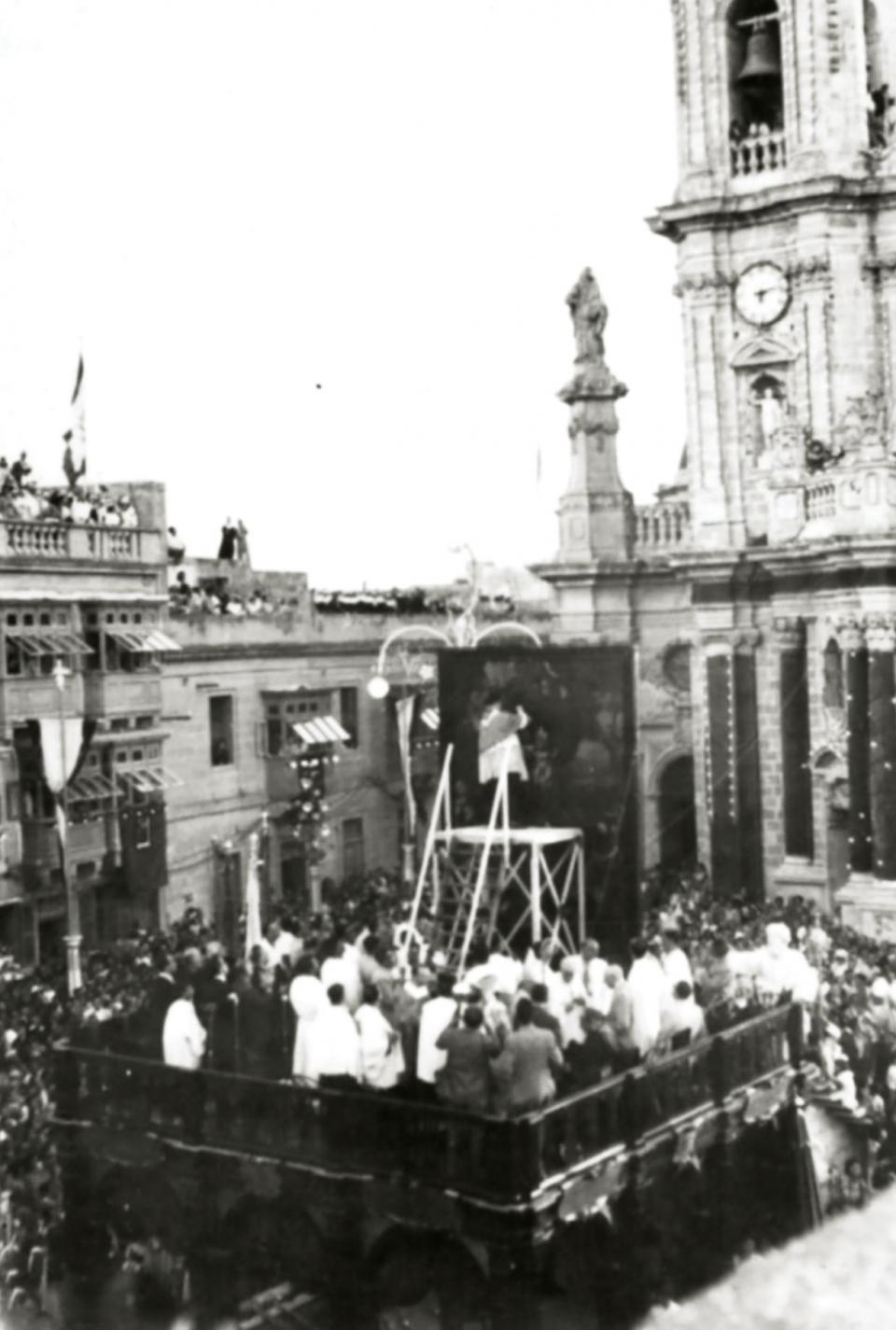 Mgr Joseph Zarb placing the crown on Our Lady’s head on the painting.

In 1954, the church of Santa Domenica was discovered and a pilgrimage to Rome took place with the standard of the sanctuary and that of the Order of St John. On May 30 of the same year, Zarb was made ‘chaplain of magisterial obedience’.

On September 2, 1956, two other large chandeliers were inaugurated from the Ditta Murano, together with 18 appliques. A few days later, on September 8, the first bicycle pilgrimage took place. And, on the following day, a monument in honour of Pope Alexander VII was unveiled by sculptor Marco Montebello.

On September 7, 1957, the painting Battle of Lepanto by Giuseppe Caruana was set in place.

On September 3, 1958, a procession of monks and sisters was allegedly seen during the night, a story that brings goosebumps to some and smiles to others. On September 7, the Notre Dame Hall was inaugurated. In that same year, a statue of Our Lady of Consolation was added to the sanctuary’s collection of effigies.

For the festivities of the 1,950th anniversary of the arrival of St Paul in Malta, the relic Os Bracchi was brought to Żabbar. New artistic furniture to hold the processional canopy was made, costing £510. 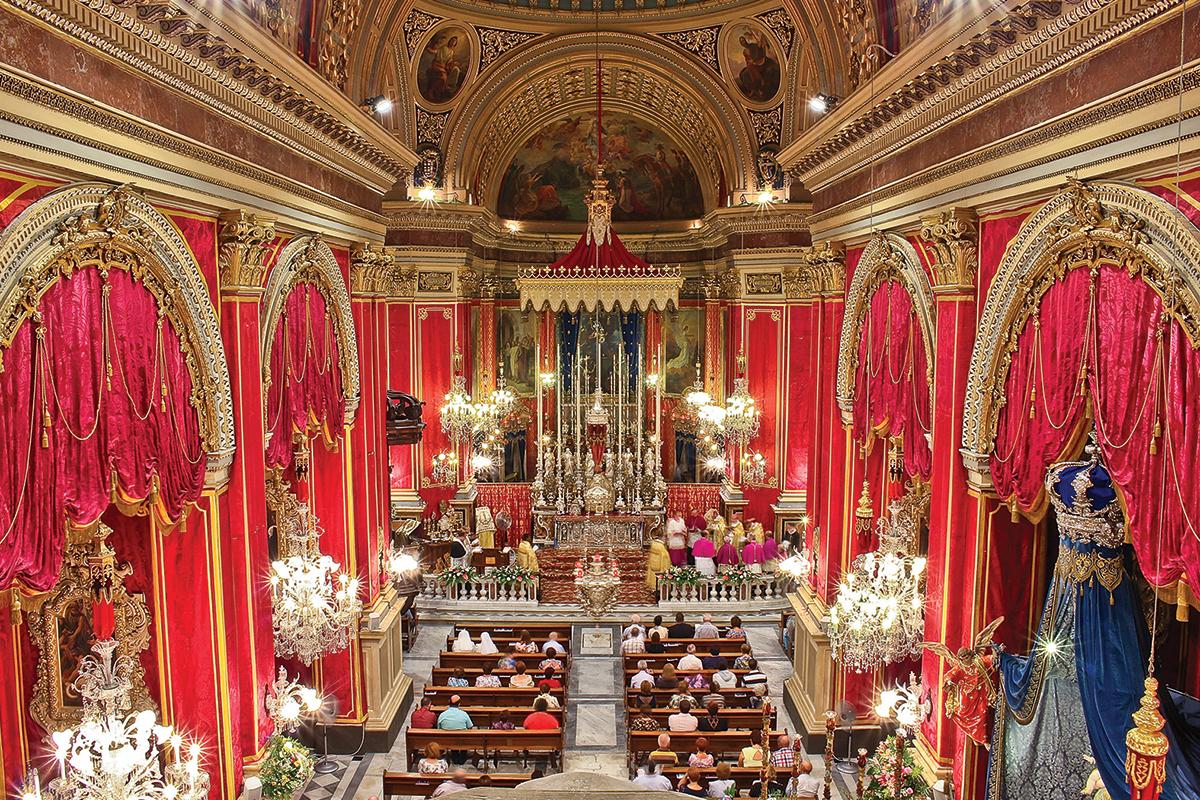 After the mass meeting of Dom Mintoff in Labour Road, a procession of reparation was conducted on June 3, 1961, with the statue of Our Lady, which passed through Labour Road, Main Street, Prince of Wales Square, St James Square, Xgħajra Street and Sanctuary Street. The following September 3, a new antependium in the choir of the parish and the painting of the apside over the transept of the rosary were inaugurated.

Parishioners loved Zarb and showered him with signs of affection. He was even described as ‘a man sent by God’ in a poem

On June 17, 1965, the large bell clapper of the big bell fell from the belfry; luckily, no one was injured. On September 5, a new silver antependium for the altar of the crucifixion was inaugurated. In May 1966, 25 ex-votos from the parish of Żabbar were exhibited in the US.

In 1968, the tabernacle was decorated and a new missal stand of silver and a new cincture with diamonds for the statue were made.

As of 1969, People’s Sunday became a défilé, with floats commemorating the Great Siege, the Battle of Lepanto and other historical episodes related to the sanctuary taking centre stage.

Zarb published the book Żabbar Sanctuary and the Knights of St John in both Maltese and English. In that same year, a standard of religion was offered to the two philharmonic societies of Żabbar. 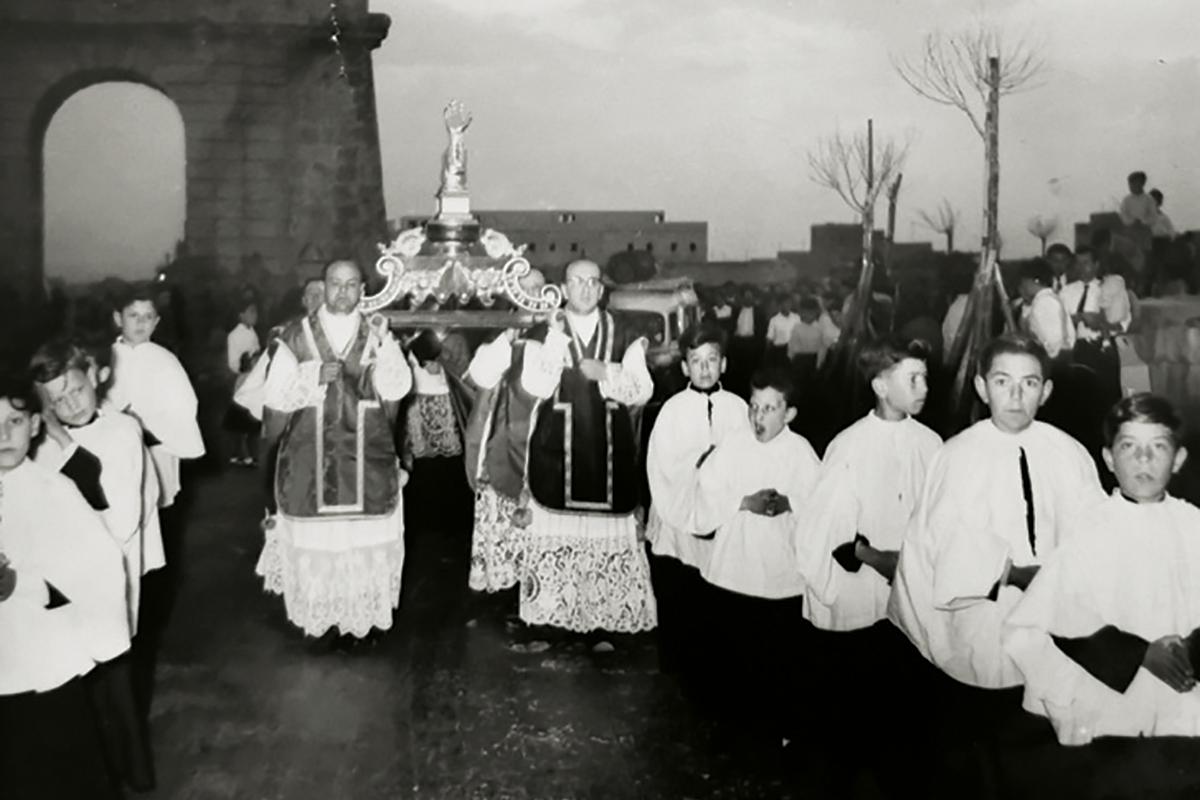 The pilgrimage with the relic Os Bracchi of St Paul.

As the Novus Ordo (ordinary form of Mass) reform in 1969 came about, the parish priest opposed the use of the altar table for liturgical reasons as two fixed altars could not, according to the liturgy, be placed on the presbyterium. Some parishes removed the main altar facing the east to erect a new altar facing the people; this meant, however, that countless treasures were lost in the process. Zarb, who had embellished the sanctuary, never dreamt of such a move. It would be his successor, Fr Joseph Vella, who was a carpenter, that would make the first altar table.

Parishioners loved Zarb and showered him with signs of affection. He was even described as “a man sent by God” in a poem. There used to be a day for the parish priest organised by the Catholic Action in which he was given a spiritual bouquet which represented in total 967 Masses, 1,149 communions, 1,105 rosaries, 1,075 visits to the blessed sacrament and 459 mortifications for his intentions.

The parish priest’s day generally started at 5.45am and he would stay in the parish office until the evening. His pastime was researching the history of the Order of St John and the parish of Żabbar.

The total expenditure for the festivities during his time was £59,766.9.2, although this is not an exhaustive sum. On February 23, 1975, he was nominated monsignor of the Cathedral Chapter and his saga in Żabbar thus came to an end.

He died 10 years later, on February 23, 1985, and his funeral was held in Żabbar. A mo­nu­ment was subsequently erected in his honour. In 1998, the local council posthumously awarded him Ġieħ Ħaż-Żabbar.

Zarb was a parish priest like no other, the proper man for the proper mission. Echoing Seutonius’s description of Augustus finding Rome a city of bricks and leaving it a city of marble, Dun Frans Buhagiar declared that Zarb inherited a church of limestone and turned it into a palace. Thus, we salute this indefatigable rector of the sanctuary, on whom all praise the people of Żabbar bestow.

Manuel Abdilla is the secretary of Żabbar Sanctuary Museum. 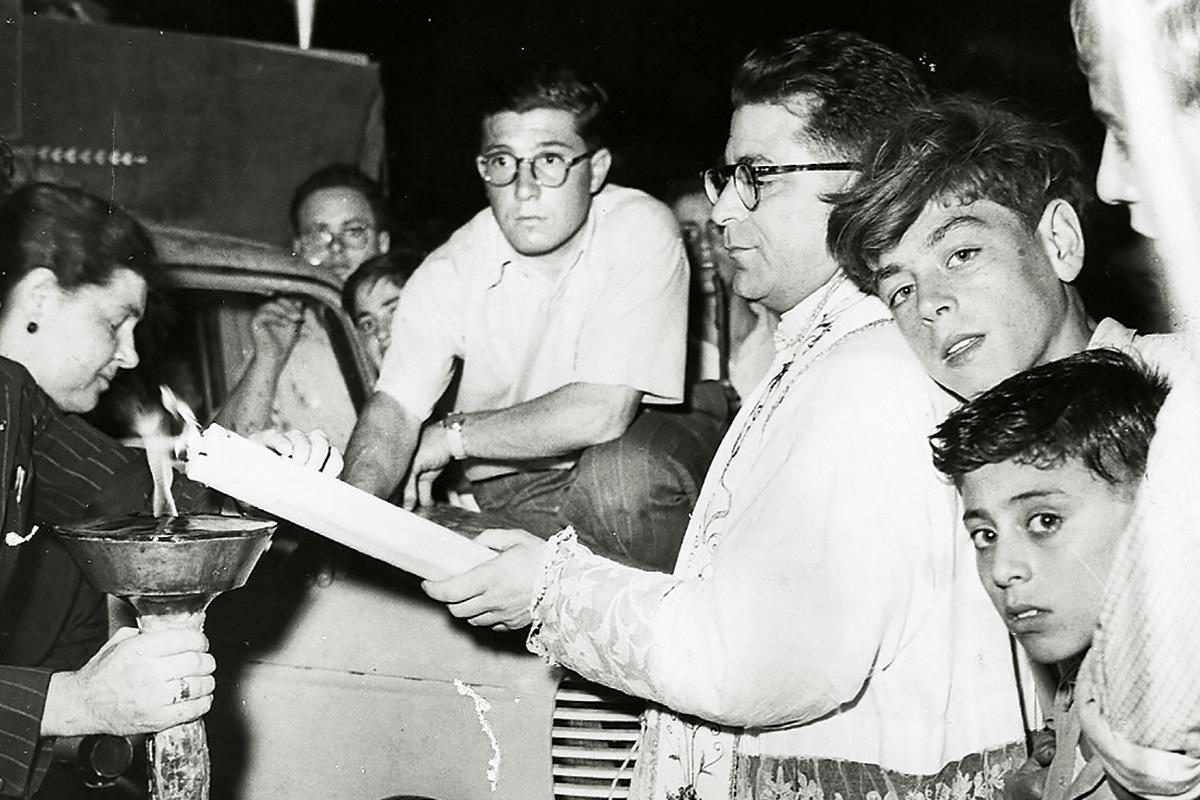 Mgr Zarb lighting the ‘candle of the parish priest’ that used to have three wicks.