It has now been one year since American political commentator Michael Brooks suddenly passed away of a blood clot.

The producer and co-host of ‘The Majority Report with Sam Seder’ and host of his own show ‘The Michael Brooks Show’, Brooks was bright, intelligent, sincere, empathetic and incredibly funny. He had the gift of satire that not too many in the political commentary business have and he used it to great effect.

Brooks was a young man, a month shy of his 37th birthday when he tragically past. His passing has left a void in progressive online media that will never be filled.

Brooks was not just interested in what went on inside America, but what went on outside of the US too.  A committed internationalist, as well as analysing US politics and society in depth, he discussed and analysed issues from countries and regions ranging from Israel-Palestine, the wider Middle East, The Gulf, Brazil, South Africa, India, China, Bolivia, Venezuela and more.

He would always have interesting guests on to discuss international relations, economics, politics and society. These guests included the likes of Noam Chomsky, Cornel West, Vijay Prashad, Richard Wolff, Pepe Escobar, Mark Blyth and others.

On ‘The Majority Report’ his comedic brilliance was awesome, helped by the fact that he had Sam Seder to play off on, as well as a great call in audience with callers like Ronald Raygun.  On the show Brooks created some very memorable characters, such as ‘right-wing Mandela’, ‘Bernie or Bust Bill Clinton’ and ‘Nation of Islam Obama’. He also did a hilarious Ben Carson impression, among several others. Once a year on April 1 ‘The Majority Report’ would morph into a stereotypical right-wing show named ‘The Ken, Ken and Ken show’, were Seder and Brooks would play typical right-wing jocks. The show was hysterically funny.

Shortly before he died, Brooks got to interview one of his political heroes, Lula Da Silva, the former president of Brazil. Upon finding out about Brook’s untimely passing, Lula paid tribute to him on Twitter: 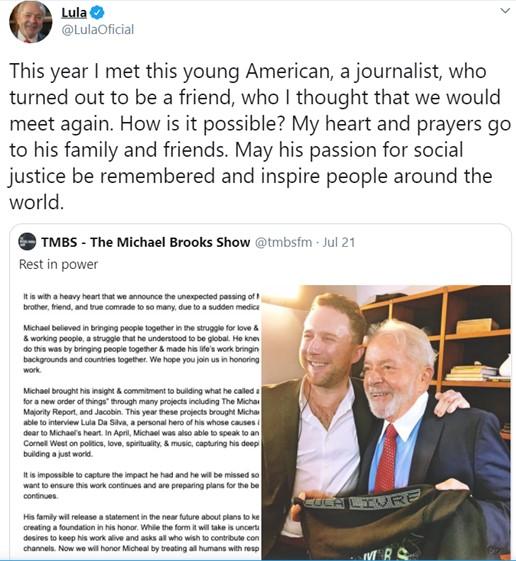 The above was just one of the many tributes that poured in from people all over the world.

Brooks was full of admiration for the 1960s African American civil rights leader Malcolm X and it is interesting how, towards the end of his life, he went through a similar change to the one Malcolm X went through. Whereas Malcolm X had rejected black nationalism for a more internationalist anti-racist vision, Brooks was beginning to see the harmful and corrosive effect of identity politics and cancel culture on the left, as his sister Lisha attested to during his tribute show.

It is sad to say that, one year one from his passing, identity politics and cancel culture are still as pervasive on the left as they have ever been; and the left itself, especially in America, seems to be fracturing.

His antidote to this, as well as to the forces of the new right, was a cosmopolitan socialism that he spoke about in his book Against the Web: A Cosmopolitan Answer to the New Right. This cosmopolitan socialism is “premised on real material needs that expresses itself in criticism, art, movement-building, and anything else that drives politics.”

However, Brooks realised this approach also “can’t simply be to tell people they’re wrong to be concerned with the cultural issues that define much of their lives or to dismiss the importance of oppression that doesn’t always take an economic form.”

According to Brooks what is needed is “a material analysis, buttressed with a sense of humor and a recognition of human fallibility, that connects the fight for a better world to the immediate interests of the majority of the population.”

This cosmopolitan socialism seeks solidarity, unity, growth, forgiveness and redemption, not eternal damnation. Brooks also spoke about this on his last live stream and I think it’s a fitting way to end this article. Michael, you won’t be forgotten:

“What does it actually mean to be truly global to the extent we can, local, national and international simultaneously; East-West-North-South, but from a place of actual growth and empathy; and this is where again this questions of consciousness come in, the questions of cultivating empathy, cultivating compassion, cultivating awareness, the complete antithesis of social media modes.

“Long term thinking, compassion, seeing complexity, comfort with oneself, solitude, the opposite of instant gratification, the attempt to constantly humanise and not de-humanize your fellow humans. These are all completely countervailing forces to the market techno logic that subsumes all of us today.”