A sense of excitement and trepidation have gripped the national team players just a few days before making their first appearance in the newly-formed UEFA Nations League when they take on the Faroe Islands in their opening League D Group 3 match in Torshavn, on Friday (kick-off: 8.45pm).

Taking part in a competition that splits the European nations according to their strengths has inevitably raised the expectations among Maltese football fans that the national team has the opportunity to finally start reaping out satisfactory results on the international scene.

Facing the likes of Faroe Islands, Kosovo and Azerbaijan might instigate a false impression that such opponents are well within our reach but Malta captain Michael Mifsud is under no illusion of the difficult task awaiting his team and is stressing on the importance of approaching Friday’s match against the Faroe Islands with added caution. 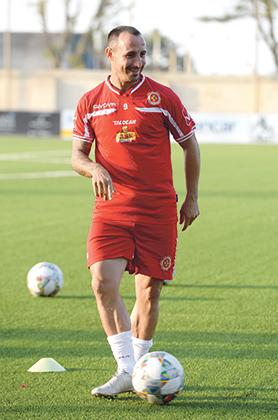 “There is great enthusiasm among the players to be playing in a new competition,” the Birkirkara striker told The Times of Malta.

“It was a great idea to introduce a new competition that replaced the traditional friendlies and gave an opportunity to small countries like Malta to play against teams of more or less the same strenght and qualify to a major continental competition.

“Still, one has to be realistic in his projections and looking at the list of our opponents one finds that all the teams we are playing are in higher places than us of the FIFA list as  Malta is behind at 184.

“So it’s important to approach this matches with a lot of humility. At present there is a great team spirit in the group and I am confident that if we play up to our strength we can gain positive results.”

Kicking off the campaign with an away match against a Faroe Island side is far from the ideal start for Ray Farrugia’s team as the Nordics are in a far better physical condition than our players as they are midway through the season while the weather conditions are completely opposite to the ones we are experiencing on our islands at the moment.

“We are coming up against a team who are in a better physical fitness than us,” Mifsud said.

“Their players have played much more matches than we have and although we have prepared well for the season we are still lagging behind them in terms of match sharpness.

It is important to approach these matches with a lot of humility...

“We will be playing in cold and wet conditions on an aritificial so there are a lot of variables to contend with.

“Still, we are taking all the precautions needed to be ready. We are holding our training sessions on the artificial pitch of the Centenary Stadium to try and get accustomed with the playing conditions and I just hope that we are capable of going through all the difficulties the match holds to try and return home with a positive result.”

Mifsud has over 20 years of experience in representing our country on the international stage.

With 129 caps to his name he is the player with the highest caps at senior level while he has also established himself as the most prolific striker in our history with 40 goals.

Asked on his views on Malta’s opponents in Group 3, Mifsud singled out Kosovo as the strongest team in our section.

“Looking at our opponents, it’s clear that we are up against three very difficult teams in Faroe Islands, Azerbaijan and Kosovo,” the former Coventry and Kaiserslautern striker said.

“Personally I think that Kosovo are definitely the strongest side. But still I think that we can be positive on our chances of gaining some points. The most important thing is to continue working hard and if we do that I’m sure that we will be able to collect a few points.”

Mifsud has been under the charge of many national team coaches during his stint.

This time around he is under the charge of a Maltese mentor in Farrugia and the Birkirkara forward had only words of praise for the new man in charge.

“Every coach has his own philosophy of play and the way of doing things,” Mifsud said.

“But since Ray took charge things have improved a lot. We feel more close to his way of thinking and he is very professional when it comes to working on the training pitch.

“We really enjoy ourselves during training and he is always looking to try out new tactical ideas to ensure he gets the best out of each and every one of us.

“I have no doubt that under his charge we will enjoy some very good results.”

The Malta national team were forced to reschedule their flight to the Faroe Islands for this morning.

But a technical problem in the aircraft prompted the captain to head back to the Malta International Airport a few minutes after take-off and efforts by the flight operators to reschedule the chartered flight to a later time yesterday, using another aircraft, proved futile due to logistical issues.

“All the members of the contingent have been duly notified of this unforeseen change which was beyond the MFA control,” the local governing body said in a statement.

“The necessary arrangements have been made for the players and technical staff to check into a hotel ahead of the rescheduled departure to Torshavn on Wednesday morning.”