Following the French Revolution in 1789, members of the aristocracy were increasingly persecuted, and many of them fled abroad. These exiles became known collectively as émigrés (emigrants), and despite initial confusion and indecision, raised counter-revolutionary armies outside of France with the aim of overthrowing the French Revolution, reconquering France and restoring the monarchy. Many of them were taken into British service.

They were many such armies and the name of the regiment was mainly associated to their region of origin or the noble who was their commanding officer. Although the British remained in Malta after the capitulation of the French army of occupation, the Treaty of Amiens signed on March 27, 1802, placed Malta as a temporary British protectorate, while the Treaty of Paris of 1814 sealed the islands’ fate as a British colony. 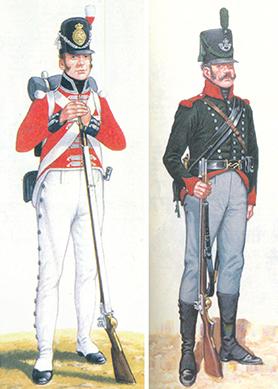 Besides the British regiments stationed or in transit in Malta, there were a number of ‘émigrés regiments’ composed of various foreigners during these turbulent years, mainly the result of the Napoleonic wars. Throughout 1800, the Minorca Regiment, De Roll’s Regiment, Dillon’s Regiment, The King’s Corsican Ranger and Hompesch’s Light Dragoons all passed through Malta in transit to the various theatres in the Mediterranean region.  During the period of 1801 to 1816, other foreign troops serving Britain, such as The Chasseurs Britanniques, Watteville’s Regiment, Lowenstein’s Rifle Corps, the 7th Line Battalion – King’s German Legion, the Italian Levy, De Meuron’s Regiment as well as the Sicilian Regiment, had all set foot in Malta.

The Sicilian Regiment was probably the one that served the longest in Malta – from 1808 until it was disbanded in 1816 (see ‘Malta-based Sicilian Regiment that served His Royal Highness’, The Sunday Times of Malta, November 15, 2015). Most of the ‘émigré regiments’ suffered considerable casualties during the fighting in Holland, Spain, Portugal, Elba, Capri, Minorca, Egypt and other locations, and along with their British counterparts, they were decimated by fever and disease when they were engaged in the Caribbean.

Even two of the Grand Masters of the Order of St John can be associated with other foreign regiments in British service.  These are Fra’ Emmanuel de Rohan-Polduc and Fra’ Ferdinand von Hompesch zu Bolheim.

The third regiment was the Hompesch Mounted Rifles or Light Dragoons which were raised in 1796. It served in Ireland during the 1798 Rebellion, in Spain, Egypt and the Caribbean until it was disbanded at Portsmouth in 1802. 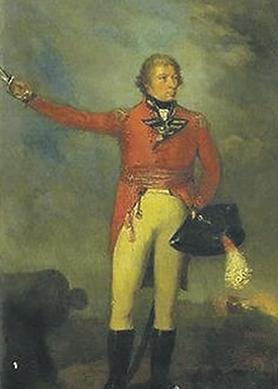 These Hompesch regiments were raised and commanded by Baron Carol von Hompesch Schwarm, by Major Franz-Karl von Hompesch and by Ferdinand Ludwig Josef Anton von Hompesch zu Bolheim, a general in the British Army. Christian Josef von Hompesch, canon of Trier, also served as a lieutenant in one of these regiments and died of yellow fever at Santo Domingo. Although the consulted records did not supply much detail on these officers’ origin, it is understood that they were the nephews of Grand Master Ferdinand von Hompesch.

Émigré regiments associated with the name of Rohan include the two regiments of Rohan’s Hussars, raised in Germany in 1794 by Louis-Victor, Prince of Rohan, and the Rohan Light infantry.  Once the number of men in these regiments dwindled, including those of Hompesch, they were absorbed in other foreign regiments until disbanded.

In 1798, the Bavarian Francis, Baron de Rothenburg, who previously commanded the Hompesch Hussars, was given command of the newly raised 5th Battalion of The King’s Royal Rifle Corps, composed of many of the men from the former Hompesch regiments who followed him into service, as well as from the Lowenstein’s Chasseurs, another disbanded foreign corps.

Besides the British regiments stationed or in transit in Malta, there were a number of ‘émigrés regiments’ composed of various foreigners during these turbulent years, mainly the result of the Napoleonic wars

According to ‘A Regimental Chronicle & List of Officers of the 60th, or the King’s Royal Rifle Corps, formerly the 62nd, or the Royal American Regiment of Foot’ by Captain Nesbit Willoughby Wallace in 1879, the origin of the Maltese Cross as a badge in the British Army has a Maltese connection.  Prince Louis-Victor was a relative of Emmanuel de Rohan-Polduc, the 70th Grand Master of the Order of St John in Malta.  In fact, since then, the Maltese Cross badge in the British Army became the badge of the Rifle Regiments, while the previously stringed Hunting or Bugle Horn badge remained the badge of the Light Infantry Regiments. 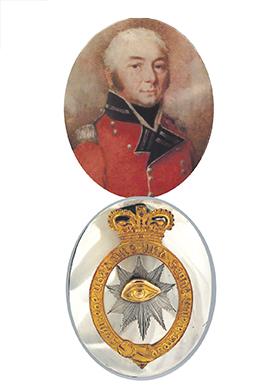 With regard to Froberg’s Regiment, one can also comment on the real name of Count Froberg, which was Gustav de Montjoie. Montjoie, or the old French Munjoie, is the historical battle cry supposedly used under Charlemagne and later in the medieval Kingdom of France, where it was at some point, presumably in the 12th century, extended to ‘Montjoie Saint Denis’ in reference to the Oriflamme battle standard, which was originally kept in the Abbey of St Denis. The phrase also appears as the motto on the coat of arms of the Kingdom of France.

The account written by ‘O.R’, referred to in Mr Grech’s article, is a very accurate and detailed account of events.  So is the reference of the problems foreseen by General Villettes regarding the hostility of the Maltese towards the men of Froberg’s Regiment who were mainly of Turkish origin.

His premonition was well founded when, on June 3, 1806, he wrote: “It will ever be a very difficult task to maintain any sort of harmony between them and the inhabitants of this island who are extremely prejudiced against them for their being mostly from the confines of Turkey. If they remain much longer I am afraid some unpleasant disturbances might occur.” This was the reason why the regiment was billeted at Fort Ricasoli and as far away as possible from the congested harbour area or any villages in the vicinity.

After having published my own research on the Froberg Mutiny I was referred to the transcript of the court of enquiry set up the British military authorities, which met during April 20, 21 and 22, 1807. The court was composed of Brigadier General Christopher Tilson as president; with Lieutenant-Colonel Arthur Brooke, 44th Regiment; Lieutenant-Colonel Sir John Dalrymple, Maltese Corps; Major Cavendish Sturt, 39th Regiment and Major John Hamill, also of the Maltese Corps.

Five Swiss officers – Frederick Schwartz, Rodolphe de Muralt, Frederick Watteville, Seguesser and Baron Muller – had confronted the mutineers and tried to negotiate with them, but without success. The mutineers attacked them, killing Schwartz and Watteville, and seriously wounding Muralt, while the regiment’s commander, Major Schummelketel, was bayoneted and left for dead.

During the conflict, Gunner John Johnston of the Royal Artillery was on sentry duty and refused to let the rebels pass. He moved into the narrow passage which led to the powder magazine, and continued to fend them off, but was killed by a volley of musket fire. A commemorative plaque commemorating Gunner Johnston is affixed to the wall inside the main gate of Fort Ricasoli and another plaque is on the parapet of the reconstructed section of the landward fortifications of the fort.

According to the court of enquiry, three other British sentries were killed during the fighting – Private William Fox and Lawrence Taafe, both of the 44th or East Essex Regiment of Foot, and Private John Howell of the 89th (The Princess Victoria’s) Regiment of Foot.

Incidentally, little is known of the badges and insignia that were worn by the Froberg Regiment. Since my main hobby and passion is uniform buttons, which I have been researching and illustrating for over three decades, I can confirm that the button shown in Mr Grech’s article is the only such item of uniform that is known to me. It is a silver button as worn by an officer and only came to light in May 2015 in one of the auctions of Bosleys Military Auctioneers.

I am interested in the details of buttons worn by these émigré troops and early British Colonial units, but ironically, I was never able to discover the pattern of button worn by the Royal Regiment of Malta that was raised in 1805 and disbanded in 1811. 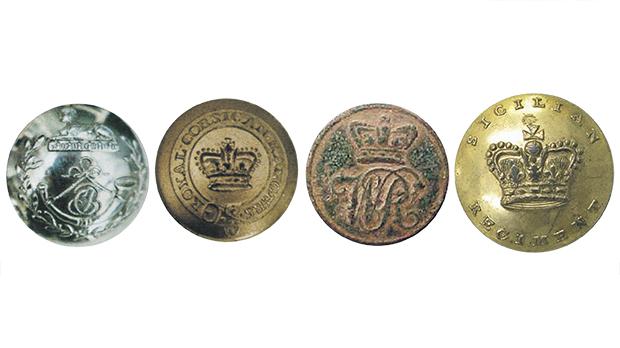