Migrants have taken over a merchant ship off the Libyan coast and are headed north, towards Malta.

It then veered north.

An AFM spokeswoman confirmed reports of a "pirated ship". 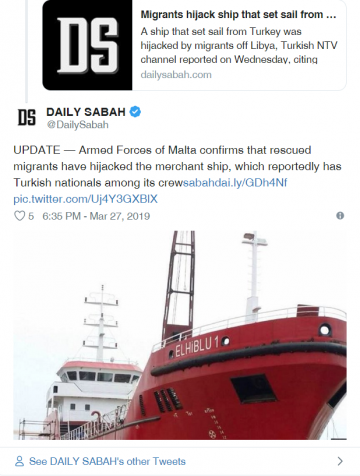 Two Libyan coast guard ships are understood to be tailing the vessel, which flies a flag of Palau.

Its last known contact was an alert sent out by its captain warning that it was under piracy.

The ship had set sail from Turkey and a number of Turkish nationals are among its crew.  Their condition is not known.

Malta's AFM will refuse to allow the vessel to enter local waters, a spokeswoman said, adding that units were on standby for any eventual development.

At current speed, the ship is expected to reach Malta early on Thursday.

A government source told Times of Malta that around 77 of the ship's 108 rescued passengers are believed to be men, with the other 31 being women and children.

Can authorities board the vessel?

Authorities could board the ship once it enters Maltese territorial waters and arguably its contiguous zone, which reaches 24 nautical miles off Malta’s shore, invoking the 1982 United Nations Law of the Sea Convention. 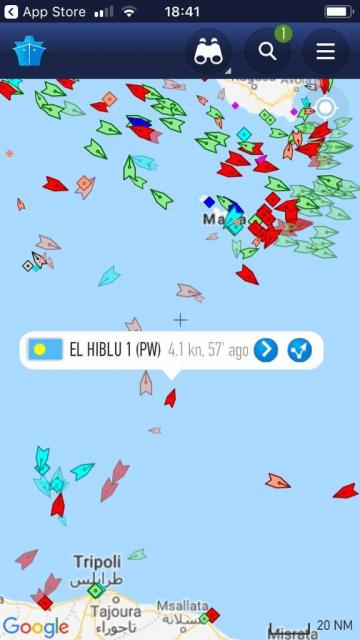 The subsequent 1988 Convention for the Suppression of Unlawful Acts of Violence Against the Safety of Maritime Navigation allows state parties to “establish jurisdiction” over vessels which have been subjected to a hostile takeover.

Italian Interior Minister Matteo Salvini described it as an "act of piracy" and an AFM spokesperson spoke of a "pirated vessel".

But according to the letter of the law, that is technically not correct.

Under international law, a hostile takeover must occur on the high seas for it to qualify as an act of piracy. In this case, the vessel had been taken over in a country's waters - Libya's - and by people on the same ship. Piracy under international law requires two vessels.

The distinction might appear academic, but it had legal ramifications, Prof. de Fremeaux said.

“Acts of piracy are subject to universal jurisdiction, meaning any country can intervene,” she noted.

Wednesday's case echoes a similar incident which occurred last November, when a group of migrants rescued at sea and taken back to Libya refused to disembark the ship once it reached Misrata.

That days-long stand-off had only ended once military personnel stormed the ship.

Alleged piracy case of El-Hiblu today follows incident in #Misrata in November when #migrants rescued off #Libya by the Nivin refused to disembark, saying they'd rather die than go back to #Libya. Both desperate acts by #migrants that'll ward commercial crews off rescues.

Earlier on Wednesday the EU said it will suspend ship patrols that have rescued tens of thousands of migrants in the Mediterranean amid deep resistance by populist-led Rome.

The rescues were part of the EU's Operation Sophia which diplomats have decided to extend by six months beyond its March 31 expiry date, but without new ship deployments, the bloc announced.

Instead, the operation will rely on air missions and close coordination with Libya despite the political chaos that has scarred the country since 2011.

"Member states have decided to extend the mandate of Operation Sophia for six months with a temporary suspension of its naval assets while member states continue working on a solution related to disembarkation," said EU spokeswoman Maja Kocijancic.

However, Sophia "is a maritime operation and it is clear that without naval resources, it will not be able to carry out its mandate effectively," she added.

Since its launch in 2015, after a series of tragic shipwrecks, the mission has claimed the arrest of some 150 traffickers, and rescued 45,000 people.

But the election of a far right-populist government in Rome last year changed the fate of the mission, with authorities taking a much harsher stance towards rescued migrants heading for Italian shores.

Italy's anger effectively put an end to rescue operations through Sophia a year ago, even as the EU credited the mission with having stopped smugglers taking migrants on dangerous sea crossings.

Sources told AFP the decision split the EU's 28 member states, with several countries wondering whether Sophia -- now a naval mission without a navy -- should be halted.

Efforts to reform Operation Sophia in the long term have beached on the broader question of how to reform the EU's so-called Dublin asylum rules, which stipulate that the country of first arrival must process asylum seekers. 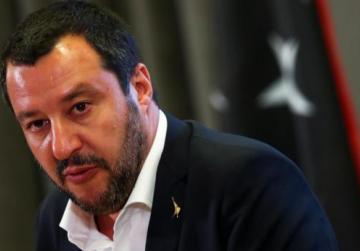 Under the stewardship of far-right Interior Minister Matteo Salvini, Rome has insisted it should not have to carry the burden of dealing with migrants rescued at sea.

The stance has seen Salvini gain in popularity ahead of EU elections set for May.

"Rationality went out of the window a long time ago," an EU diplomat told AFP on condition of anonymity.

"This is damage control in the hope that once election season is over we might actually come to our senses," the source added.

Over the years, Europe has added new functions to the mission, which also trains the Libyan coastguard and controls the enforcement of a UN arms embargo on Libya, and illegal oil trafficking.

EU cooperation with Libya has been credited with sharply reducing the number of migrants arriving from North Africa and the Middle East from a 2015 peak when Europe faced its worst migration crisis since World War II.

Activists however decry rampant human rights abuses against migrants in Libya as they await passage to Europe and urge the EU to not outsource the problem to Tripoli.

For the moment, two ships patrol the central Mediterranean as part of Operation Sophia: Spain's "Rayo" and Italy's "Luigi Rizzo", which are supported by air assets from Spain, Italy, Poland and Luxembourg.