The order to remove a makeshift memorial to Daphne Caruana Galizia at Valletta’s Great Siege Monument was issued directly by Justice Minister Owen Bonnici, a court heard on Monday afternoon.

Dr Bonnici gave that order early in September, once the decision to restore the monument had been taken.

This clearly emerged during a hearing in the course of constitutional proceedings filed by blogger and protester Manuel Delia against the government over an alleged breach of his fundamental right to free expression, after the memorial to Daphne Caruana Galizia was dismantled some 20 times.

Parliamentary secretary Deo Debattista, whose portfolio includes responsibility for Valletta 2018 and Public Cleansing, explained that Dr Bonnici had told him to clear the memorial after the decision to restore the Great Siege monument had been taken, stating that national monuments fell outside his remit as parliamentary secretary.

Read: Another layer of defence for the Great Siege Memorial site

Taking the witness stand in the constitutional case, Dr Debattista explained that he had got to know through media reports that the monument had been cleared “some 20 times,” stating that he had never given any direct order to that effect.

The only time he was consulted, he had advised that it would have been better for the clearing up to take place in the evening, when workers from the public cleansing division cleaned the city streets during night shift after 10.00pm.

Ramon Deguara, director general at the Cleansing and Maintenace Division, also testified during Monday’s sitting, explaining how he had received instructions from Minister Bonnici early in September.

“Before then, there were clear instructions not to touch anything,” Mr Deguara explained, adding that the situation had changed once the decision to restore the national monument had been taken.

In September, Mr Deguara had received instructions to clear the memorial site from the minister via a telephone call.

After that, workers from the Cleansing and Maintenance Division had regularly cleared away flowers, candles and photos during night shift between 10.00pm and 3.00am, Mr Deguara explained.

Although at first the practice was to deposit the items at the Valletta Police Station, workers began depositing the items in court following advice by the department lawyer, Chris Cilia.

All items outside the boarding, inluding photos affixed to it, had also been removed, Mr Deguara explained in reply to a direct question by Mr Justice Joseph Zammit McKeon.

Mr Deguara had deposited the items in the court registry himself, law courts director general Frank Mercieca told the court.

Testifying in representation of the Police Commissioner, Inspector Priscilla Caruana Lee, stationed at Valletta, presented copies of eight reports filed about the constant clearing away of the memorial between March and October.

The reports had been filed first by Karol Aquilina, later by Manuel Delia and Robert Aquilina, the Court was told.

“At first we did not know who was responsible for the removal of the items, until we found out that it was the public cleansing department,” the Inspector explained.

Were the police informed when national monuments were to be restored, the Judge asked.

“It depends,” the Inspector replied. “Such as when barriers are needed or tables and chairs need to be removed.”

Inspector Caruana Lee had personally investigated one report when persons were seen around the Great Siege Monument, but CCTV footage had revealed nothing illegal and no steps were called for. 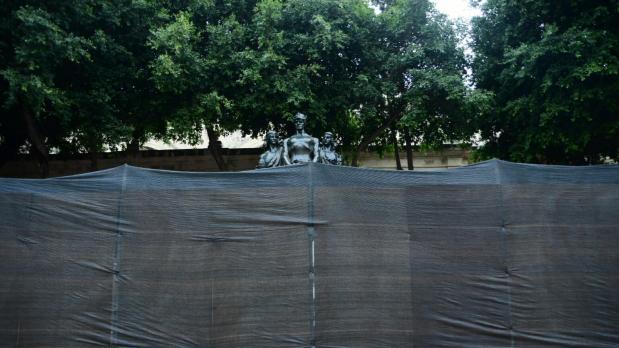 The monument was blocked off for restoration works, angering protesters who have used the site as a shrine to Daphne Caruana Galizia.