The Finance Ministry has hit out at the Nationalist Party for 'seeking to interfere' in an evaluation of Malta by MoneyVal - the Committee of Experts on the Evaluation of Anti-Money Laundering Measures and the Financing of Terrorism.

It was reported on Sunday that Malta’s anti-money laundering regime received a poor grade in a draft Moneyval evaluation, with the government now scrambling to push up its final score before the summer deadline.

On Wednesday and on previous occasions, Opposition leader Adrian Delia called on the government to take concrete action to strengthen Malta's reputation. 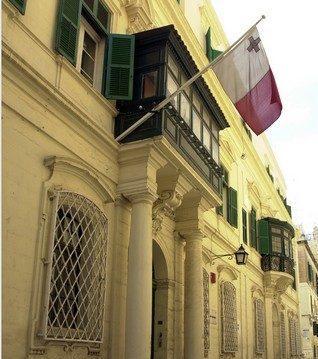 The Ministry of Finance in Valletta.

The Finance Ministry said the PN's latest attempt to interfere with the due process being carried out by MoneyVaL was ample proof that it was set to harm the country on the pretext of concern for Malta’s reputation.

"This Council of Europe mission has been carrying out such circa two-year evaluations about Malta, for the last 20 years. The Nationalist administrations have experienced these missions starting in 1998. The missions have always in the past carried their task serenely without undue pressure or interference from the political class," the ministry said.

"Not this time. While in opposition, the Nationalist Party is dead set on interfering and prejudicing the findings. As soon as it was communicated that MoneyVal will be carrying out its evaluation process for Malta, MEP David Casa asked to meet with MoneyVal officials to inform the independent mission about a number of allegations against Malta. This attempt was followed by a letter sent to MoneyVal by a number of MPs in the Council of Europe. This type of interference is unprecedented."

This claim was immediately denied by Mr Casa who tweeted that it was ridiculous.

Suggesting that I am capable of manipulating organisations such as MONEYVAL is ridiculous.

If you failed this test, that’s on you @edward_scicluna. My job is defending Maltese + Gozitan citizens. I am doing my job. It’s about time you started doing yours.@TheTimesofMalta pic.twitter.com/vdsOBlY1Zz

The government said the mammoth MoneyVal evaluation exercise involving all the Maltese regulatory and supervisory authorities together with the intelligence and law enforcement forces started many months ago . It is now entering its 8th stage with seven more stages to go. A Maltese delegation will soon leave for France to engage in a face-to-face meeting with the MoneyVal officials to discuss certain issues needing clarifications in the preliminary report.

"At this delicate phase of the evaluation process, the Opposition decided to make use and publicise an internal leaked MoneyVal official document, which is still undergoing revisions, and removal of factual errors, all of which may result in changes to its conclusions and eventual recommendations," the ministry said.

The leaked document, it said, is an internal official draft, which is undergoing a due process, which applies equally to all the Council of Europe Member States.

"MoneyVal insists that this draft is confidential and as such, it is not even sent to any Council of Europe Member State, the EU or any international institution, not to hide anything, but because the evaluation is only complete when MoneyVal itself publishes it in July of this year after passing through all the stages" the ministry added.

The Opposition was not only acting in an improper manner, by interfering in this due process, but also trying to harm the country by prejudicing the final evaluation.

Minister should provide solutions and not baseless accusations - PN

In a statement, PN spokesman Mario de Marco said Minister Scicluna's reaction to the Moneyval report was the kind of reply that the country did not need at this delicate moment in time, when it was facing the prospect of being blacklisted as a financial jurisdiction.

One would have expected the minister to provide a solid update to the nation, particularly those whose livelihoods depended on the financial services sector, about this worrying state of affairs, Dr de Marco said.

He added that one would have expected the minister to explain what was being done to avert a potential disaster. Instead the Minister lashed out with baseless accusations towards the Opposition.

The Opposition, he said, became aware of the contents of the preliminary Moneyval report when it was published by The Sunday Times of Malta.