There are some nights when we just can’t agree on what to get up to. I for one am always up for any activity that sets food on the table, but my appetite is very rarely sated. Conversely, my dearest friend has a penchant for wine that is also unmatched. In either case though, we always find that one is a gateway to the other. When I drink I tend to require food and when I eat I tend to desire fine wine. 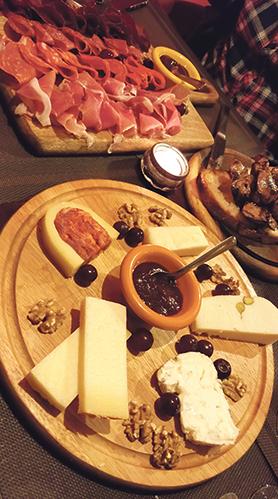 It’s nights like these that we always find ourselves at an impasse. Finding a venue that offers the best of both worlds is rare. And I’m not talking about tapas or meze-style eating here. I personally find that in the wine bar scene, tapas is Spanish for ‘overpriced and overrated’. If I wanted to be charged €3 for a bowl of olives I’d also expect them to somehow double up as the miracle cure for my inevitable hangover.

The debate raged on for what seemed like an eternity. We had pretty much settled on the idea of not actually going anywhere or getting up to anything, opting to waste away on our respective sofas rather than give in to each other’s fancies (that pretty much sums up most friendships, right?). It was at this point we remembered there was a third party joining for the evening and perhaps their input might be worth a shot.

It barely took him a second before he said Cent’Anni with obvious certainty. The name is a clear indicator of how long it would take you to find it if you, like us, had never heard of the place before. Located in the idyllic side streets of Għargħur, Cent’Anni is a beautiful little townhouse expertly converted into a perfect catering establishment. The rooms are cosy and personal, the decor carefully plotted and the lighting warm and inviting.

Setting foot in this place immediately switched my brain to relaxation mode and I melted into my chair like the weight of the world had been lifted off my shoulders.

Service was very brisk and we had menus in our hands almost immediately, with aperitif and water orders offered. We opted to stray from hard liquor as we eagerly eyed the wine menu and right off the bat it was clear that Cent’Anni takes its wines very, very seriously.

The list boasts a hugely varied selection of bottles I have rarely seen before. I am a great lover of new world wines but, while there were a few of the usual suspects available, the atmosphere truly lent itself to an experience closer to home. With that as our main motivator, we browsed through the particularly impressive array of Italian and French wines the restaurant had to offer and settled on a Sicilian red we had never tried before.

Of course, the aforementioned dilemma instantly came to light but was quickly quashed with a hearty order of appetisers. Your run-of-the-mill salumi and cheese platters seemed an appropriate accompaniment and since I was the hungry one, I also snuck in an order of fried rabbit liver. I’m not going to lie, there are a few things that set my heart aflutter when I spot them on a menu and liver is my definitely kryptonite.

I didn’t pay much attention to how long the food took to come out. With good company and the idyllic surroundings, time became irrelevant. All I know is the platters were placed in front of us about half a bottle later, which could be anywhere between 15 to 30 minutes.

The salumi platter was impressive looking and displayed a nice bit of bresaola and Parma ham; pricier cuts which are normally a rarer find. The cheese board was decently sized but lacked anything to write home about barring the homemade chutney that accompanied it. A note to the restaurant: please bottle that and make it readily available to the market. Gold.

The fried rabbit liver was perfection. Beautifully pink in the centre, it sat on a nest of confit onions and crisp Maltese bread. I always tend to fear the word ‘balsamic’ on a menu, but the use here was perfect and tied everything together brilliantly. My fellow diners were quick to catch on to my joyous reaction and descended upon the plate like piranha to blood.

Alas, all good things must come to an end. In this case, it was our wine that met its demise and so we sent for a replacement. But as the saying goes, every end is a new beginning; and our appetites had begun to pick up speed. So we ordered a few main courses to see us through the evening.

Once again, the service was very timely and our mains were brought out before we even had time to wonder where they were. The rib eye steak was an enjoyable meal and we got exactly what we ordered: a perfect medium rare cut, some lovely roasted baby potatos and a delightful match to our wine.

The French veal chop, however, fell short of the mark. The margin of error on veal is fairly narrow and our steak was only slightly overdone and underseasoned. Not a massive issue by any means, but with a price tag of €26 we had hoped for something to really wow us. Ultimately, the potato gratin and mushrooms on the side stole the show but that’s not the job of the accompaniments.

The biggest disappointment, however, was in the gnocchi. Four ingredients were listed on the menu: gnocchi, gorgonzola, guanciale, walnuts. There isn’t a thing wrong with any of those words and quite frankly, guanciale and gorgonzola also top my list of buckle-at-the-knees grub. I couldn’t resist ordering this meal but I couldn’t get myself to finish it either.

When I saw this on the menu, I had pictured something very different. I had hoped for a light gorgonzola sauce that stuck to the gnocchi, crispy guanciale and walnuts to add texture and a little depth with the melted pork fat and nuttiness. What I got instead was a heavy amount of sauce which overwhelmed my palate and the pasta. The walnuts were in poor attendance. The guanciale seemed more like pancetta to me and was limp, soft and unrendered. It was served in large uncut strips which led to mouthfuls of textureless masticating. Overall it bordered on unpleasant and I was left regretting my decision of overlooking the also tempting lamb shank.

To top the evening off, we shared a couple of desserts with our coffees and dregs of wine. I can’t flaw dessert at all. The homemade imqaret were spectacular as was the chocolate and banana fudge they served us which brought a giddy smile back to my face. The gnocchi nightmare was quickly forgiven and the memory, long behind me, covered beneath soft, chocolatey goodness.

With €51 on starters, €25 for each of the steaks and €13.50 for the gnocchi, it meant that in the end the meal was a little over €185 between the three of us. Granted, we ordered a fair amount of food, there is no denying it, but I feel that in the long run the food felt heavier on the pocket than it did the stomach.

Does that mean I won’t be back? Certainly not. Cent’Anni is definitely a place I will visit a lot more regularly in the future. But perhaps more for the wining than the dining.