The fire which engulfed the Miżieb woodland last weekend affected around a quarter of the green area, much more than initial estimates had indicated, according to an internal report seen by Times of Malta.

Conducted by the Environment and Resources Authority in collaboration with Ambjent Malta the damage report found that an estimated 180,000 square metres of the forested area was impacted by the massive blaze that broke out last Saturday and was still smoldering on Monday morning.

The Hunters’ Federation, which claims to have rights to use the woodland as a hunting reserve, had issued an estimate that around 55,000 square metres – an area six times the size of the Floriana Granaries – had been burnt.

According to the team of experts from the two government environmental agencies, the scorched area was actually far larger. 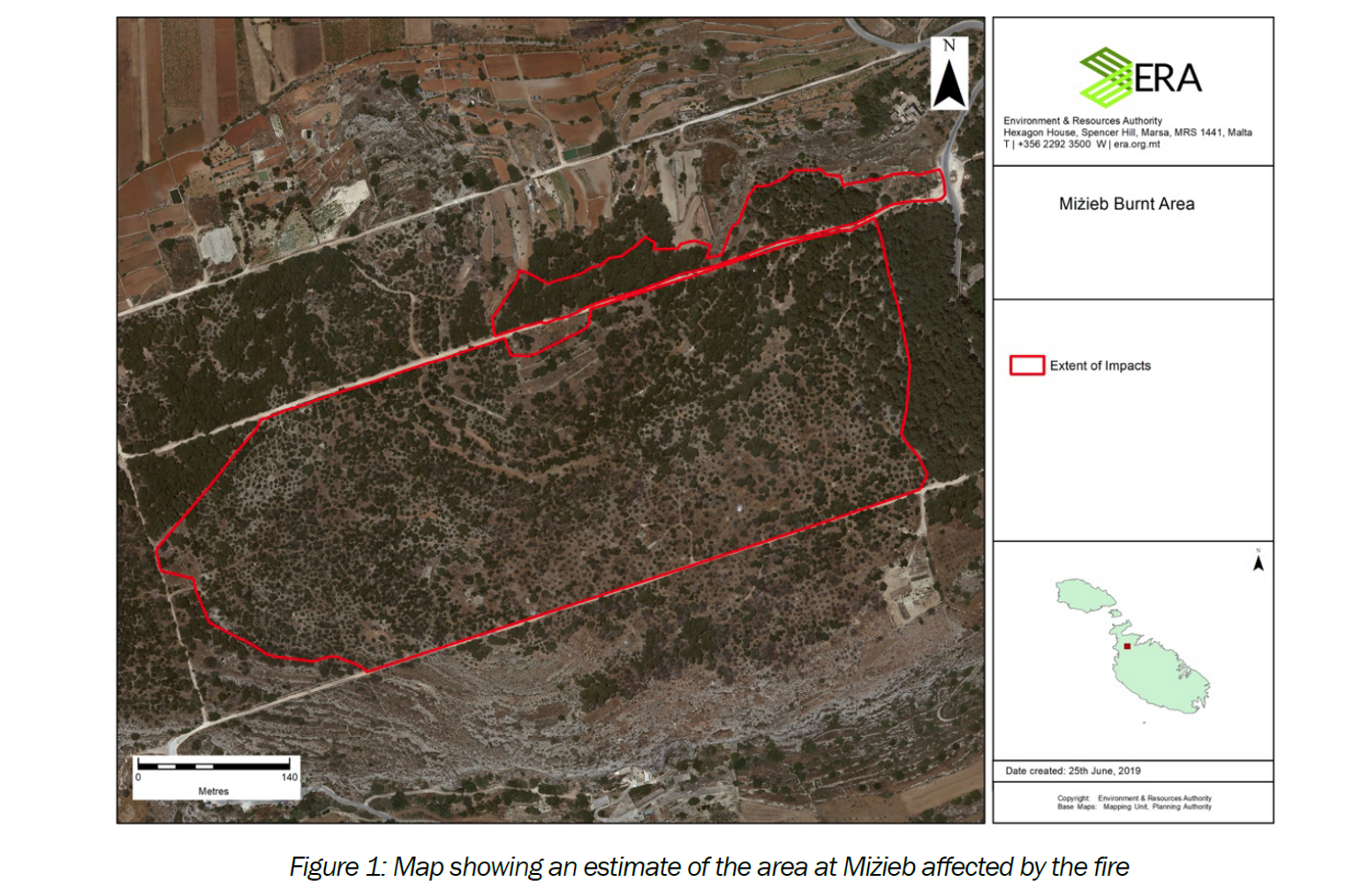 A map of the affected area in the expert report.

It could have been even worse. Sounding a warning for the future, the experts say that the fire could have spread much deeper into the woodland had a few dirt roads and paths not acted as barriers to contain the rising flames.

Which species burnt down?

The report does not quantify how many trees were lost, saying only that a “large number” were burnt down.

Aside from burnt trees, some over-turned ones were also found during an onsite inspection.

These trees, the experts report, probably lay horizontally as they had been planted on shallow garigue, and may have assisted in the rapid spread of the flames.

Why did the fire spread?

These however, were not the leading cause of the extent of the blaze.

According to the report, it was the presence of “highly flammable species”, such as pines and eucalyptus, the large extent of combustible pine needle cover on the ground, and significant amounts of human litter dumped throughout the wooded area which are considered to be the main factors in assisting the spread of the blaze.

“The combination of trees, besides not being natural, includes some of the most flammable species in the world,” the report reads.

It later adds that the planting of highly flammable alien species, not only “considerably reduced biodiversity”, but also posed a major fire hazard.

The document does not get into what caused the fire to spread, which is currently the subject of a police investigation.

Meanwhile, sources involved in policing the island’s green outdoor spaces have told Times of Malta that the likeliest cause was the burning of pruned branches in nearby fields. 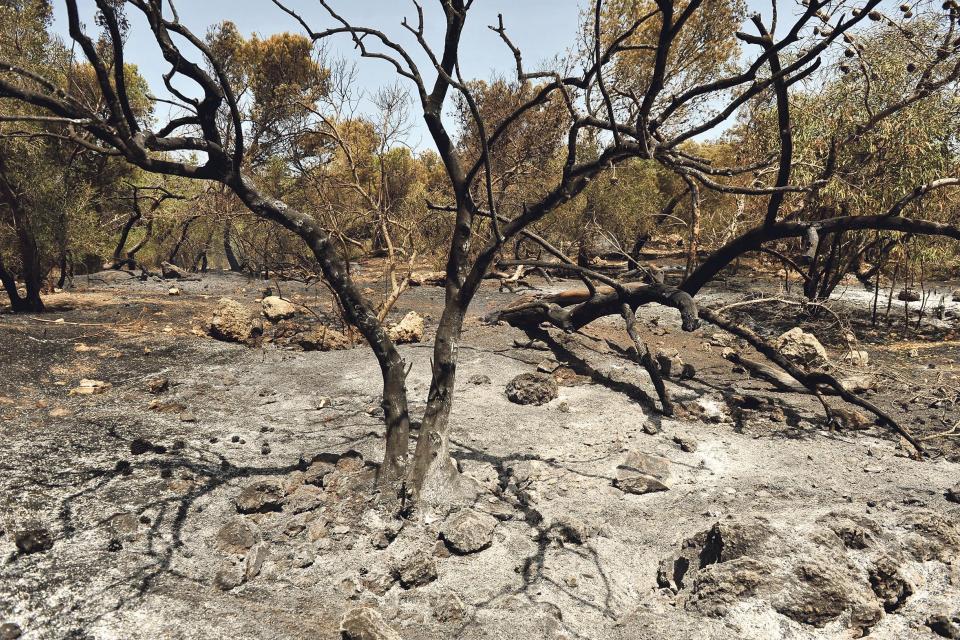 In their report, the ERA and Ambjent Malta team say that garigue and certain species of beloved local shrubs (including the Mediterranean Thyme), were also impacted by the fire.

One of the largest fires in years

Emmanuel Psaila, who heads the Civil Protection Department told Times of Malta that the inferno was one of the largest he had come across in his 20 years of firefighting.

It was, without a doubt, the largest he had seen in recent years after taking over the department, he added.

In all, 16 firefighters battled against the flames in the Miżieb area around the clock between Saturday and Sunday morning, as little pockets of scorched earth kept re-igniting under the blaring heat of the June sun.

Firefighters present said that had they not remained on site to ensure the fire was contained, the damage to the woodland would have been far greater.

Minister José Herrera, together with Parliamentary Secretary Clint Camilleri and officials from the Environment and Resource Authority, AmbjentMALTA, and FKNK visited Miżieb after ERA and AmbjentMALTA had concluded an extensive analysis of the fires which engulfed the area.

The report found that the lack of biodiversity made it easier for the fire the spread out, recommending a mixture of native fire-resistant species, backed up fire ecology principles and fire management including access to water from the pipeline passing through the Miżieb area.

It also advised that the pine tree saplings should be given time to regenerate on their own, protecting new saplings, while olive trees should be allowed to resprout from their buds. It also recommended that invasive alien species should be controlled and eradicated.

ERA and AmbjentMALTA will now be drawing up a management plan for the area, which will incorporate passages, more rubble walls and indigenous trees that are more resistant to fire.