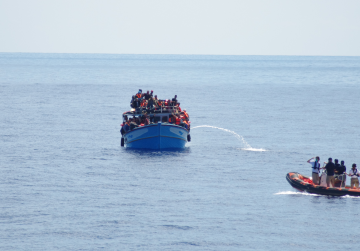 The MOAS rescue operation: a wooden boat with 227 migrants, including 57 children.

The private migrant rescue mission launched from Malta this week has saved the first migrants, a group of 250 Syrians and Palestinians, which includes 40 children.

The group were on a wooden fishing boat when they ran into trouble in a stretch of sea south of Malta and the NGO’s vessel, the Phoenix, was directed by the Italian authorities to step in.

The people rescued were taken on board and are currently accommodated on the vessel’s deck, awaiting an Italian military vessel to pick them up.

The Phoenix was yesterday also called to assist a group of 96 migrants on a dinghy, who appeared to be Sub-Saharan. They were assisted to board a merchant ship.

There are currently multiple rescue operations taking place in the area, which is outside Maltese search and rescue zone. 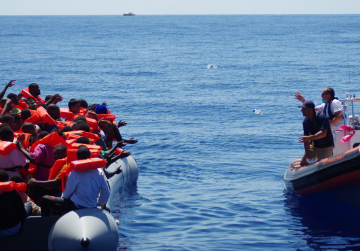 The MOAS rescue operation: a dinghy with 97 migrants.

The area operation is still ongoing but more details will follow.

The Migrant Offshore Aid Station (MOAS) was launched officially on Monday from Malta but only really started operating on Wednesday.

On the day of its launch, the vessel assisted a Maltese fisherman and his five-year-old son, who were stranded some miles off the south coast of the island.

The NGO is the brainchild of entrepreneurs Chris and Regina Catrambone, who inspired by an appeal launched by Pope Francis, decided to fork more than €4 million of their own money to set up the venture.

The aim of its operation is not to ferry rescued migrants but for the vessel to act as a station out at sea that will help identify vessels at risk and give first assistance in coordination with the military forces in Malta and Italy.