US actor Denis O’Hare could sense the ghost of Molière smiling as he rode his co-star Olivia Williams like a horse on stage at London’s National Theatre.

Usually a rather cerebral place, the National’s audience was in stitches as O’Hare’s character Tartuffe, from the classic 17th-century French play, tried to disguise his adulterous antics as a bit of horseplay.

“The comedy translates across the centuries if you know what you’re doing,” O’Hare said.

“Some of the funny was based on language and some of it on sheer idiocy... But there are also great moments of pathos and human emotion that make it all the richer.”

That hit production of Tartuffe in 2019 was a reminder that Molière, France’s most celebrated playwright who turns 400 on Saturday, can resonate in the land of Shakespeare.

It was not always the case.

“It used to be a box office manager’s nightmare to have a Molière production. You often had more people on stage than in the theatre,” Noel Peacock of the University of Glasgow, an expert on Molière translations, said.

In the 1980s, one Sunday Times critic even feared that Molière was an obstacle to a united Europe: “How can you trade freely with a nation whose best comedy does not travel?”

But since those times, there has been a “complete turnaround,” Peacock said.

There have been dozens of British productions in recent years − three major versions of Tartuffe in London alone between 2016 and 2019.

He is attracting celebrities: Keira Knightly played in The Misanthrope in 2009 and David Tennant (of Doctor Who fame) in Don Juan in 2017.

Peacock credits fresh translations that worried less about linguistic accuracy than capturing Molière’s spirit with helping to bring out the universal truths in his work. 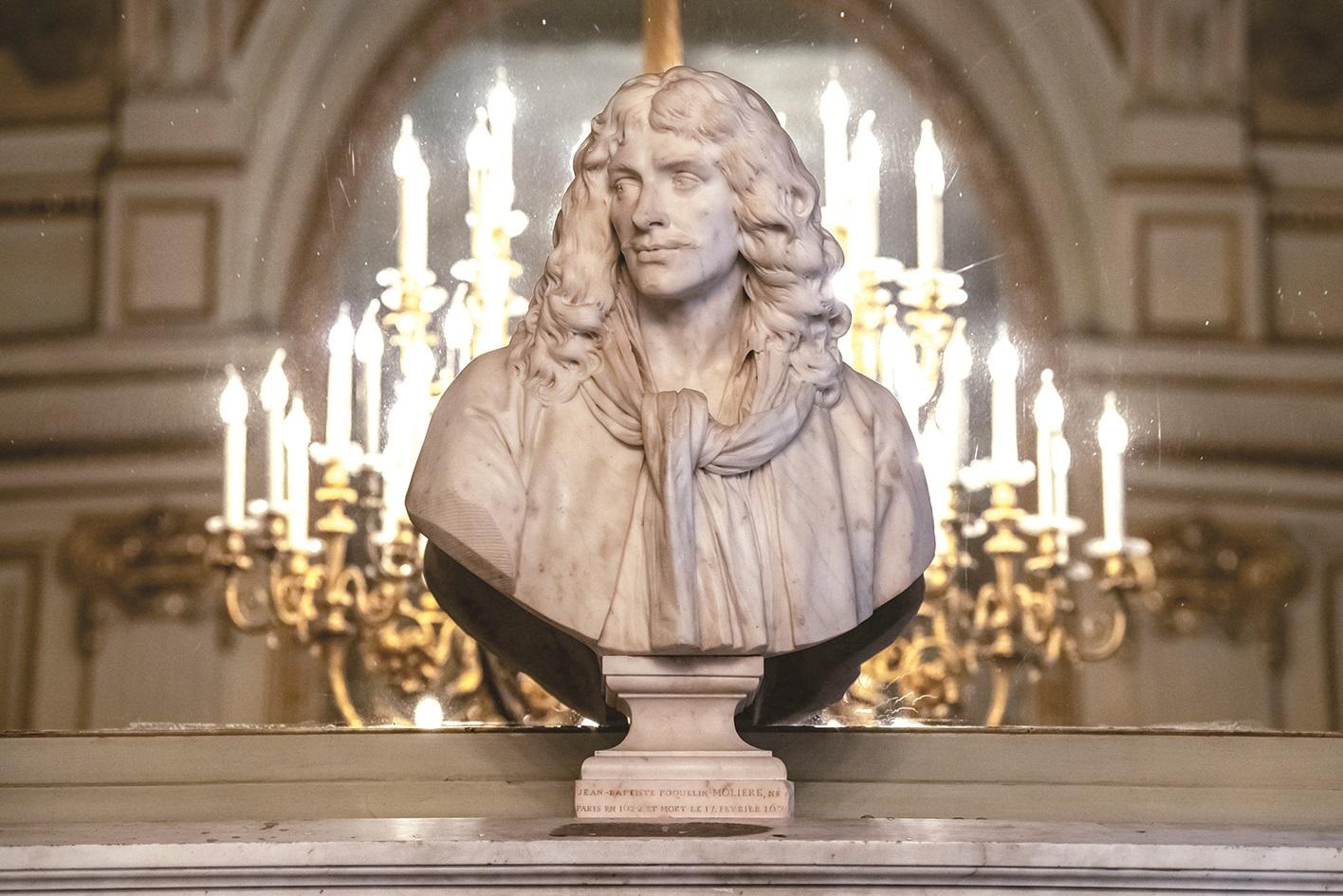 The bust of Molière at La Comédie Française theatre.

“Tartuffe is a rogue, a rascal, a hustler. But he’s also a truth-teller – in the great tradition of the French clown. He upends society’s norms and conventions.”

That has made him highly adaptable to modern scenarios.

The Royal Shakespeare Company recently relocated Tartuffe to a British-Pakistani family in Birmingham, where the commentary on religious hypocrisy found fresh relevance. 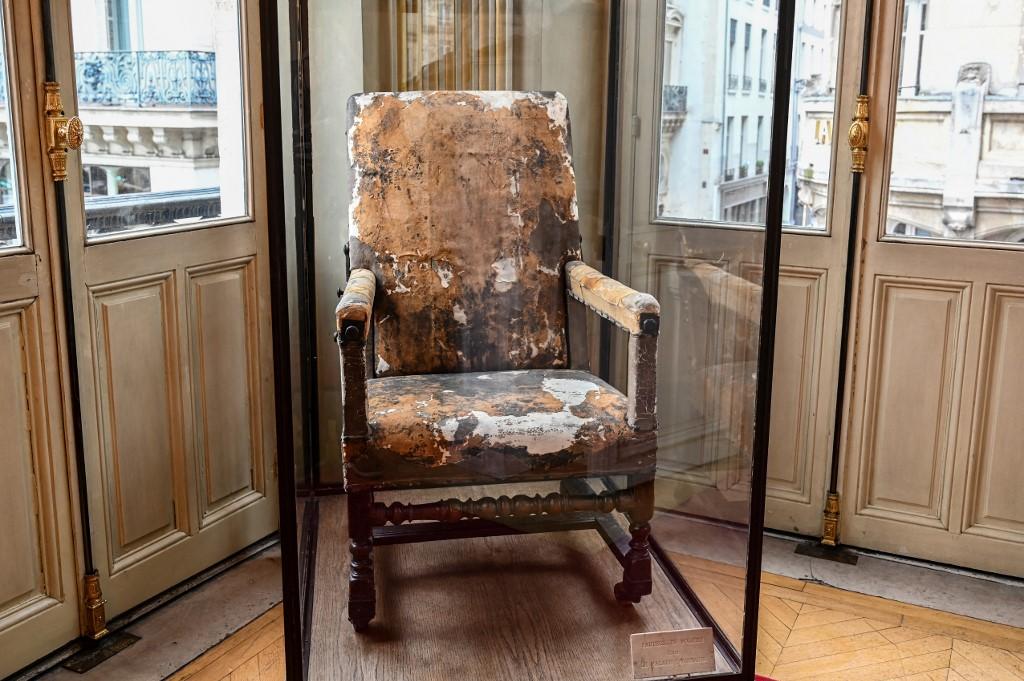 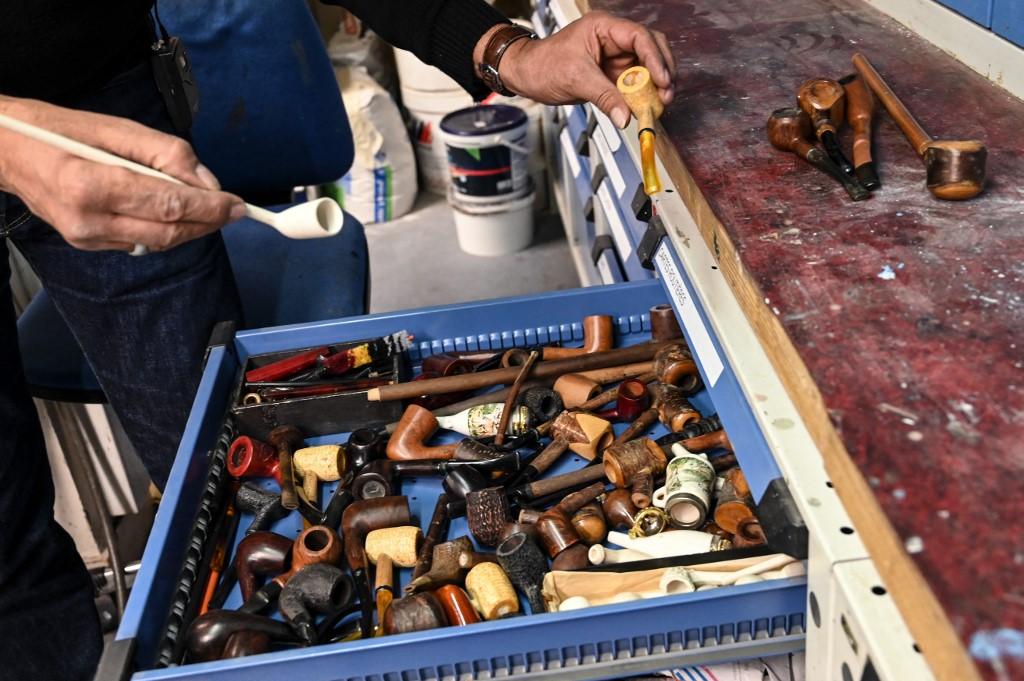 A drawer of pipes in the Christophe Demoulin's workshop, head of the props of the Comédie Française in Paris. 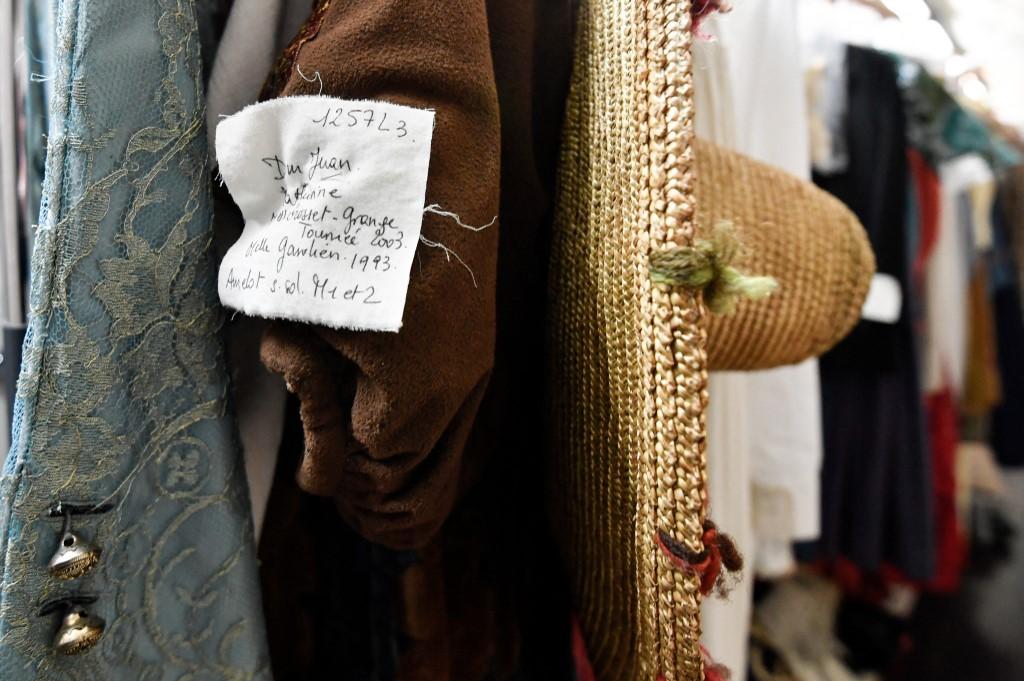 Costumes are seen at the Comédie Française national state theatre in Paris.

The Exchange Theatre, a French-English company based in London, has just released a documentary about its version of The Misanthrope, which it set in a modern-day newsroom to highlight Molière’s focus on truth and lies.

“The fact that he so vehemently criticised the falseness and liars in the world is one part of what makes his work survive so well,” David Furlong, the company’s French-Mauritian director, said. 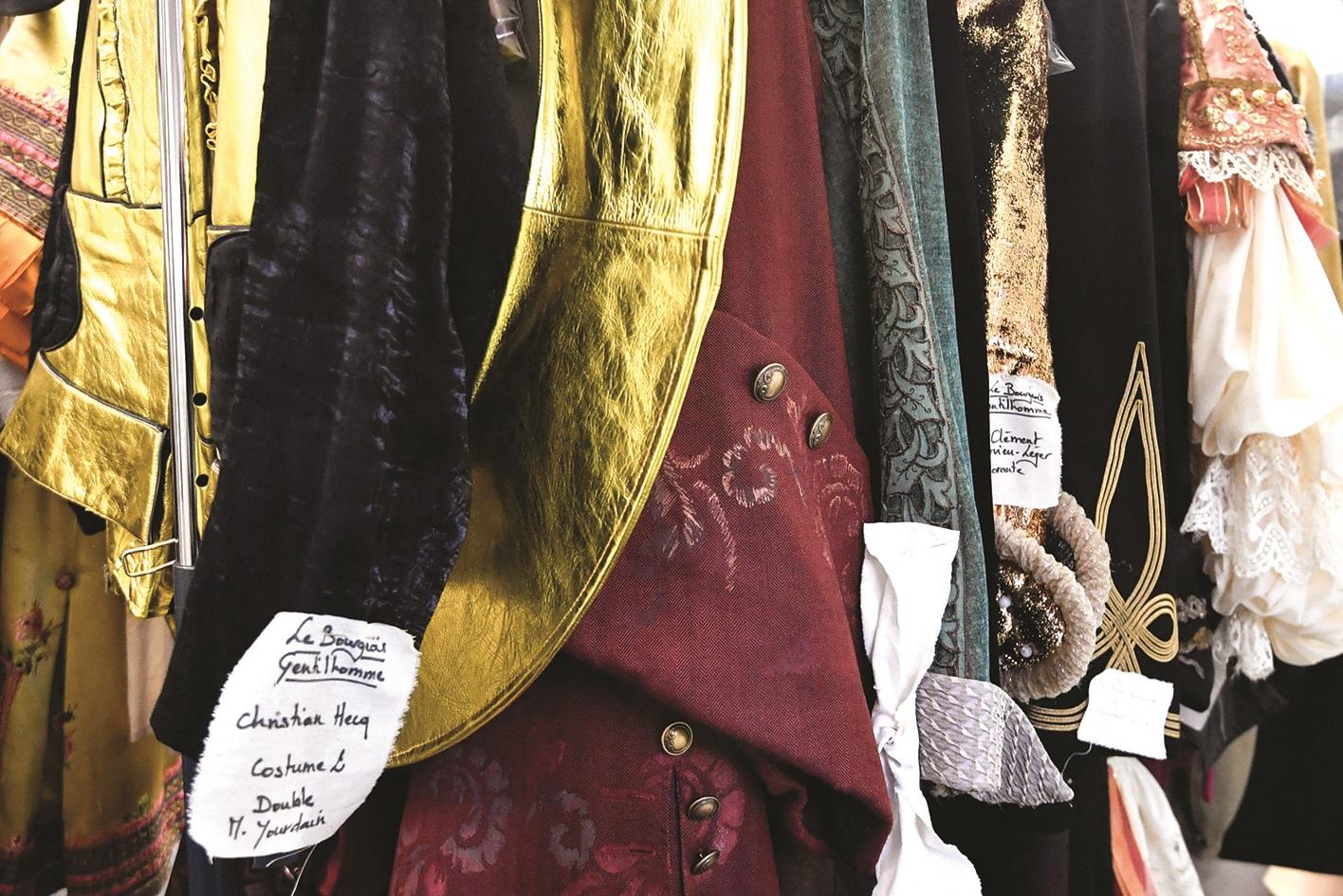 He highlighted the famous, sarcastic monologue about hypocrisy in Don Juan (“To act the part of a good man is the best part one can act”) as the sort of speech that will be eternal.

“I’ve wondered in the past if it’s just my French education that tells me Molière is a genius,” Furlong said.

“But I don’t think so. There are so many faces to Molière, he’s so rich and diverse, does comedy as well as he does tragedy, silly farces as well as highly philosophical plays. He speaks to everybody.”

It’s not just the English-speaking world that has embraced Molière of late: translations have proved popular in Germany, Russia, Japan and beyond.  A recent French book about Molière in the Arabic world found he had been performed in the region since at least 1847 and had become the “godfather of theatre” in many countries. 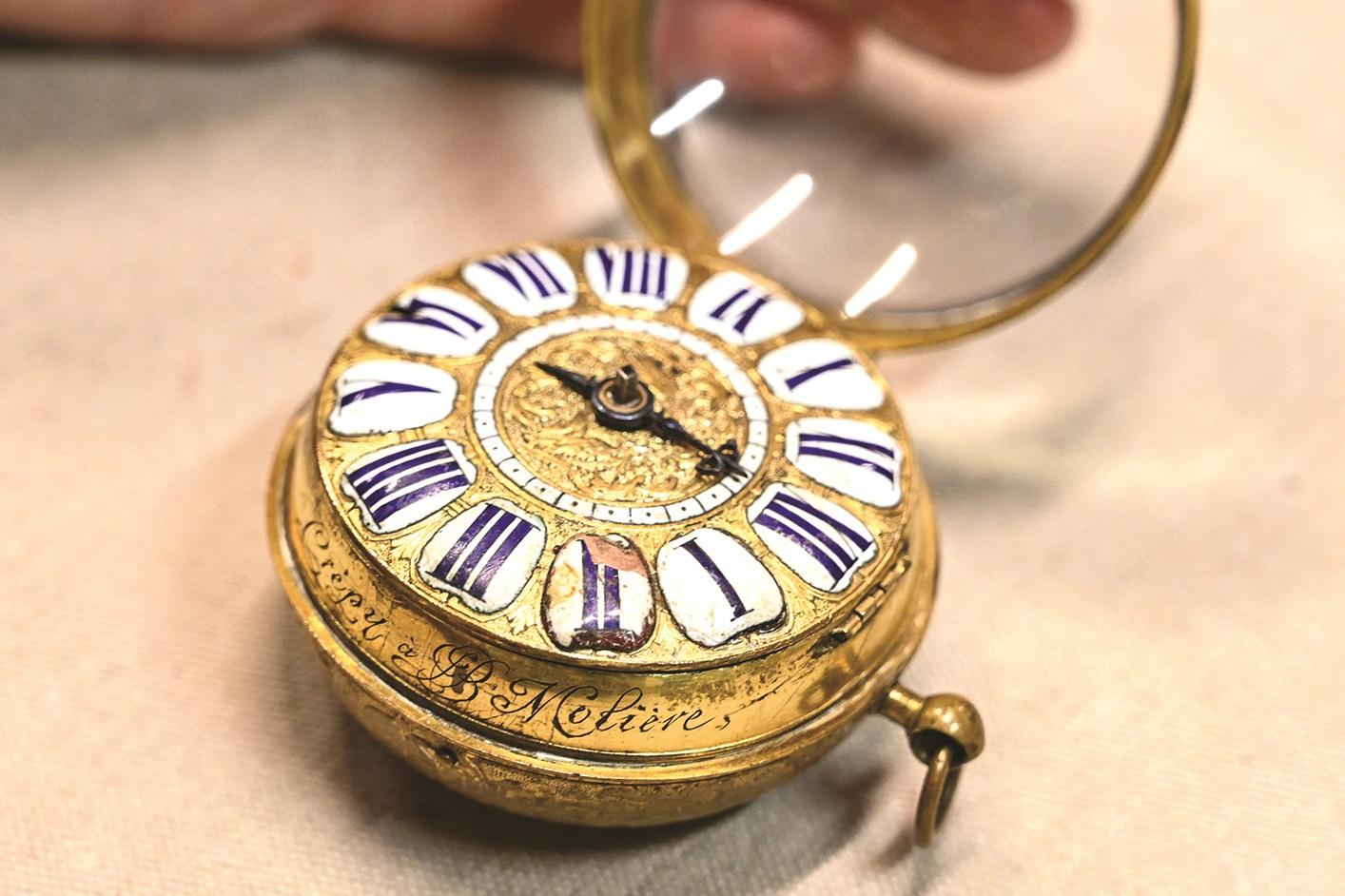 A clock that once belonged to the playwright is among the theatre’s treasures.

“Molière’s plays have been extremely important internationally. He even provided the foundation for some national theatres which adapted his plays to their local languages and cultures,” Agathe Sanjuan, conservator of the Comédie-Française in Paris, noted.

It was always a tougher sell in England, of course, where he had to compete with the Bard, though adaptations of Molière were appearing there as early as the 1660s, according to Peacock.

However, he found more success in Scotland, Peacock added, which had a “Shakespeare-sized hole to fill” and where Molière’s “biggest advantage was that he wasn’t English”. 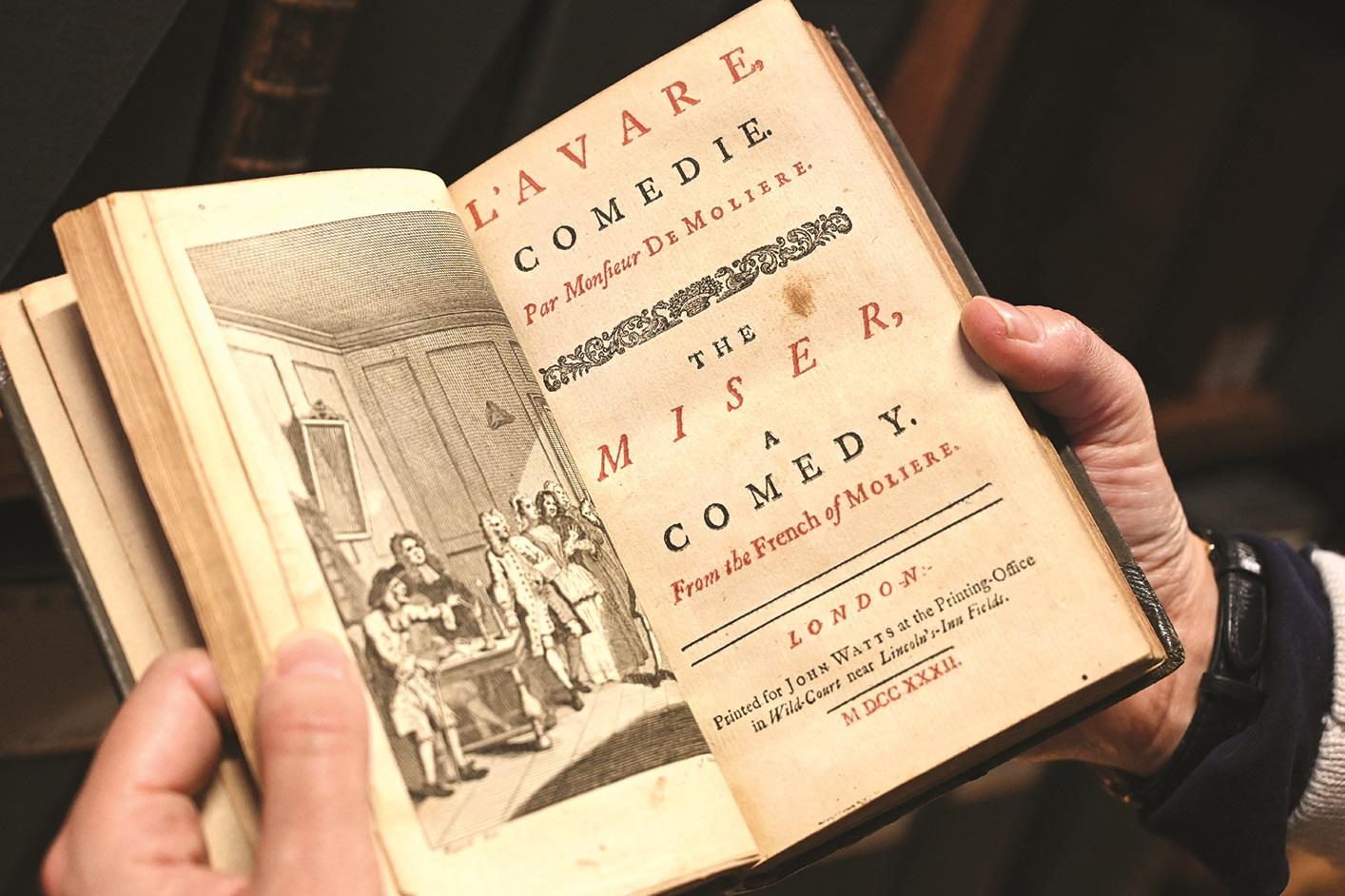 A page from a 1732 bilingual anthology of plays by the French playwright.