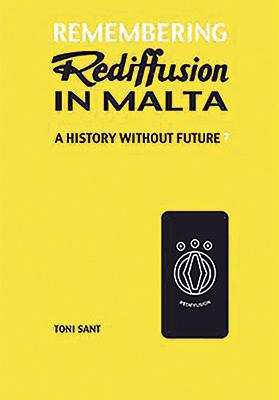 In the early 1990s, Ġużè Aquilina had a weekly series in The Sunday Times (of Malta) entitled ‘Meeting People’. My turn came up on January 17, 1993, when I had already been on radio and TV for 24 years. In his inimitable way the professor had asked me if one day I intended to write “an independent history of broadcasting”. I remember agreeing with the idea, adding that such a narrative would certainly be of service to the public and an appreciation of the pioneers’ dedication.

In his 240 pages of Remembering Rediffusion in Malta, A history without a future Toni Sant manages to elicit moments of nostalgia, often interspersed with trips to the socio-political milieu of the time, in order to cover decades of Maltese radio broadcasting.

He starts from its inception early in the 20th century to its closure, first in 1975, when the British provider – quite unceremoniously – ended its operations on the Island and in 1989, when dwindling cables around the Maltese archipelago were dismantled, mostly under pressure from modern wireless transistor radio sets.

The author declares that the book does not claim to be a history of broadcasting in Malta; it mainly “provides a glimpse at the history of Rediffusion”, by and large lifted from transcripts of audio interviews with a number of pioneer broadcasters laced in a series called Il-Fil tat-Tiġdid, which  Sant produced, as an employee in 1990 for Radju Malta.

Sant says that this volume “documents a media archaeology project”, following a discipline within media studies, pioneered among others by Michel Foucault. Foucault’s concept of archaeology is focused in discourse and an analysis of the statement. Scholars say it is not easy to define this kind of mapping knowledge and history; statements tend to be “acknowledged as being significant or insignificant”, while providing “important insights into the mechanics and dynamics of a discipline or epoch”.

Instead of searching for homogeneity in a discursive entity, Foucault looks at ruptures, breaks, mutations, and transformations – including marginal or forgotten discourses – “to understand the production of meaning and knowledge”.

What do we learn from this remembering marathon by certain well-known names in early sound broadcasting in Malta? Quite a lot, I must say. Eight chapters following a contextual timeline (aptly reproduced in brief in the introduction) fall within three divisions namely the years before World War II, the years after the war up to the 1960s with the third part highlighting the aftermath of the closure of Rediffusion’s operations.

With such titles as ‘Broadcasting arrives in Malta’, and ‘Establishing professional radio broadcasting in Maltese’, the book’s major contribution definitely lies in the collection of narratives depicting the association of early presenters with the sound broadcasting landscape on the Island. Part of this detailed information has never been published and, therefore, it certainly provides recorded knowledge of the genre in print.

On the other hand, some of the historical – sometimes lengthy – background insights of what was politically happening in the world, on the island or at Rediffusion, while providing pertinent information, do risk interfering with the pace of the reader who might simply prefer to just follow the account of the presenter under review.

Political chronicles may be found in a number of other sources, mostly within the realm of social history, newspapers and in the very few published books about broadcasting in Malta, as this volume itself refers to.

Another positive contribution this journey gives to the local broadcasting memory bank is the number of nostalgic photos which the author gathered from various interviewees and archives. They enrich the text and stimulate the memory, at times recalling several names and faces which have long disappeared from behind the microphone; obviously the older ones represent more historical value.

The completion of a broadcasting history of Malta does not only represent a huge challenge – one would preferably go through the published broadcast listings over the years – but would also require in-depth social studies that analyse and interpret the relationship generations of listeners and televiewers have had with what was relayed over cables and waves.

Sant deserves congratulations and gratitude for collecting all that was available to him. This book fills a void and, at the same time, provokes a bigger challenge for whoever is ready to continue in this path by writing the full history of local broadcasting including TV, which Rediffusion also first established in 1962.

Even when it comes to the more recent story of the visual medium, a good number of pioneers have already left us. I would definitely recommend the task to be taken up by a small group of writers, perhaps academic students, as all too soon it may present an immeasurable task.