Malta’s anti-money laundering regime has failed a review by international experts. With the final score expected to be published next month, Ivan Martin goes through some of the highlights of a draft version.

It was a year-long process of toing and froing between Maltese stakeholders and the Committee of Experts on the Evaluation of AntiMoney Laundering Measures and the Financing of Terrorism, known as Moneyval.

The Council of Europe’s panel of experts had been reviewing Malta’s financial laws and their enforcement since the start of 2018, covering the previous five years.

To pass the evaluation, countries have to adopt compliant laws and regulations and prove these are being adequately enforced.

A draft version of the report quotes a risk assessment conducted by Malta prior to the Moneyval review.

The experts said the assessment “demonstrates that the authorities have a broad understanding of the vulnerabilities within the anti-money laundering and counterterrorist financing system”.

However, a number of “important factors” appeared to be insufficiently understood. 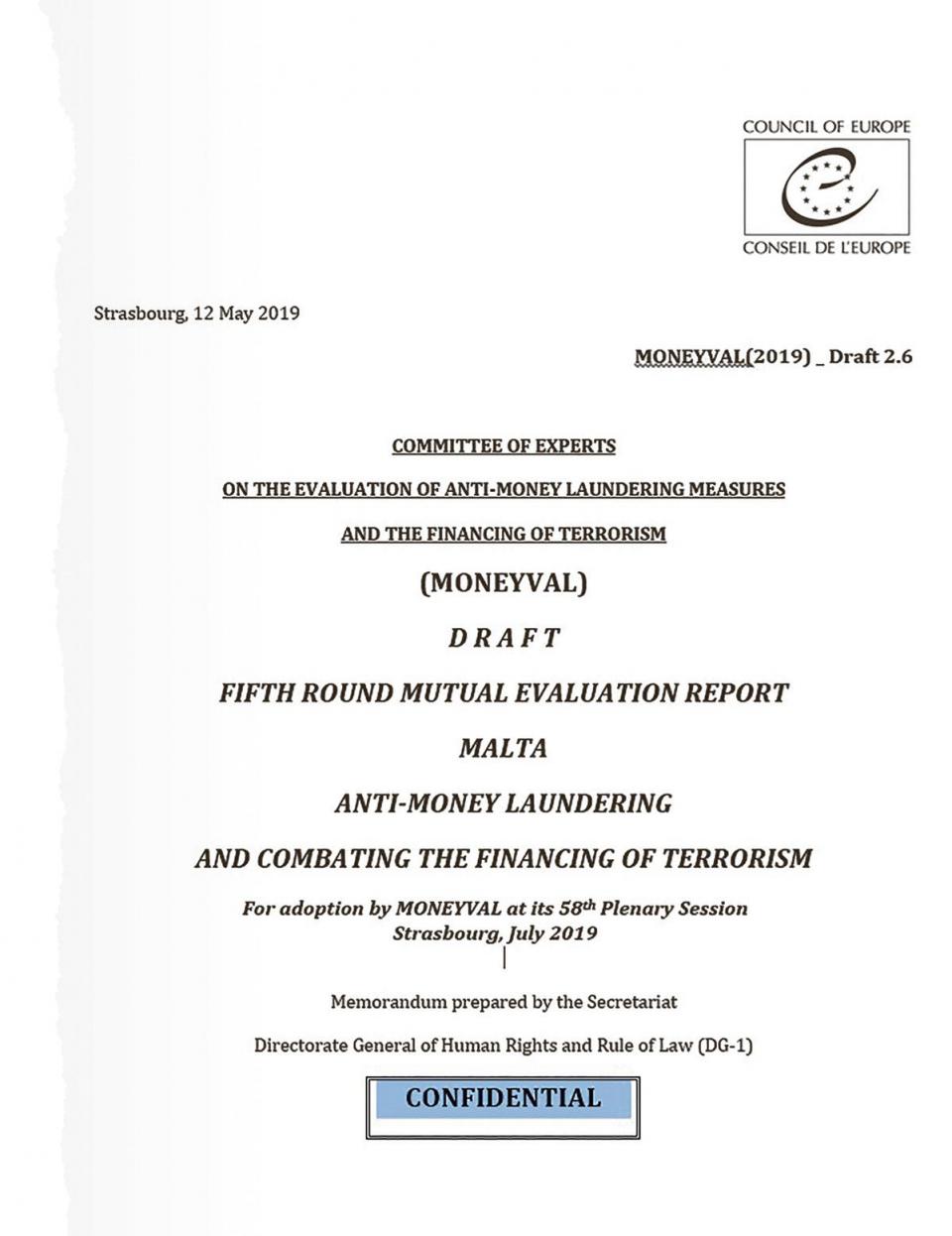 The cover of the leaked Moneyval report.

Several agencies, such as the Financial Analysis Intelligence Unit (FIAU) and the Malta Financial Services Authority (MFSA) had taken action over the period 2015–2017, and had revised, or were planning to revise, their operations and priorities to take account of vulnerabilities in the framework.

But the experts noted that only in a limited number of cases were the FIAU disseminations used to develop evidence and trace criminal proceeds.

Different factors and circumstances call into question the agency’s ability to perform its analytical function at full capacity. Underreporting and non-reporting within certain entities and sectors also posed problems.

The supervisory authorities did not have adequate resources to conduct risk-based supervision, for the size, complexity and risk profiles of Malta’s financial sector and related professionals.

At the time of the evaluation, the Maltese authorities were working through a comprehensive reform to enhance Malta’s supervisory framework.

“Positive steps” had been taken to improve their knowledge of the risks in the banking, trust and company services providers, and remote gaming sectors, however weaknesses remain for all other sectors.

The supervisory authorities’ primary focus in the past had been to issue pecuniary fines for specific breaches, rather than to assess their systemic deficiencies.

The MFSA had established fitness and properness checks, but there were examples where the MFSA had not had a full appreciation of the risks associated with the business model, and beneficial ownership of its applicants.

Market entry measures and on-going fitness and properness measures were also seen as “inadequate” for lawyers, dealers in precious metals and stones, and even real estate agents.

While the law courts routinely ordered the confiscation of assets, shortcomings in asset-tracing, in the effective use of provisional measures and in the identification of assets in the judgments cast doubts on the effectiveness of the system and the existence of a coherent policy.

No asset-tracing had until very recently been  performed in respect of assets located abroad. “Very few” steps had been undertaken to trace assets transferred onto the name of third parties or (very often complex) corporate structures.

Operators’ appreciation of money laundering risks was viewed as “varied”.

While most banks demonstrated a good understanding of the risks, some non-bank financial institutions and ‘designated’ non-financial businesses and professions were unable to clearly articulate how money laundering might occur through their businesses.

Concerns were also expressed about the level of suspicion reporting obligations with most non-bank institutions and professionals unable to elaborate on when they should report something to the authorities.

Some financial institutions were unable to clearly articulate how money laundering might occur through their businesses.

Although the total number of reports of suspicious activity has been steadily growing over the review period, there were “generally low reporting rates” across the sectors.

Overall, Malta’s financial services sector had not demonstrated that anti-money laundering obligations were being effectively implemented.

Malta implements these sanctions through a combination of a supranational and national mechanisms.

Deficiencies exist in the immediate communication of the amendments to the UN lists of designated persons and entities to subject persons. This has an impact on the immediacy of implementation.

Several Maltese professionals “were not aware at all” of their asset freezing or reporting obligations.

Most Maltese professionals demonstrated awareness of their obligations, but there was confusion whether to report to the FIAU or to the Sanctions Monitoring Board.

Several Maltese professionals “were not aware at all” of their asset freezing or reporting obligations.

Overall, positive feedback on the quality and timeliness of formal and direct international cooperation provided by Malta was received from foreign partners.

Maltese legislation sets out a comprehensive framework to enable the authorities to provide assistance for investigations. The FIAU has a broad legal basis for international cooperation and proactively and constructively interacts with its foreign counterparts by exchanging information.

The police were also active in the sphere of international cooperation through direct communication. However, the information-sharing often failed result in requests of assistance in investigations.

The evaluation team found that organised crime and fraud generated a significant part of the foreign proceeds laundered in Malta.

The assessment team was not convinced that Malta’s law enforcement authorities were in a position to “effectively and in a timely manner investigate (and, if appropriate, prosecute) high level and complex cases”. This, they said, could create the perception of “a culture of inactivity or impunity”.

In this respect, the Moneyval team  said that Malta’s own national risk assessment had used “remarkably strong language” when describing the police’s capacity.

Staffing had been clearly insufficient to cope with the extensive investigative commitments and the lack of adequate resources appeared to be the main reason for the “growing sense of helplessness among the officers concerned”.

Based on how the highest threats of money laundering were dealt with by the competent authorities, the investigation and prosecution of these crimes did not appear to constitute a priority for the Maltese authorities, “despite the willingness of the individual officers to perform their duties”.

This did not tally with the risks posed by the country’s “increasing nature as an international financial centre and the growing size and complexity of its financial sector”.

“The low number of money laundering cases [in court] confirms this assessment,” the report reads.

Limited resources within the police, and the dependence on magisterial inquiries, meant decisions on whether or not to prosecute cases of high level money laundering could take several years.

While the police argued that they could prioritise these cases, in practice the scarce resources posed insurmountable obstacles.

The lack of sufficient training of colleagues with regard to financial crimes, also meant that other officers could not be roped in to help.

The report says that during the review, a number of high-level cases of alleged corruption and other money laundering claims had been debated in Parliament and attracted strong local and international media attention, “in particular following the assassination of the Maltese journalist Daphne Caruana Galizia”.

A number of high-profile cases with regards to banks and public allegations of their implication in money laundering were also under scrutiny.

When the Moneyval experts visited the Maltese police, these cases were still in the “investigatory phase”. Due to the confidentiality of the investigations, the assessors were not in a position to form a final opinion on these. 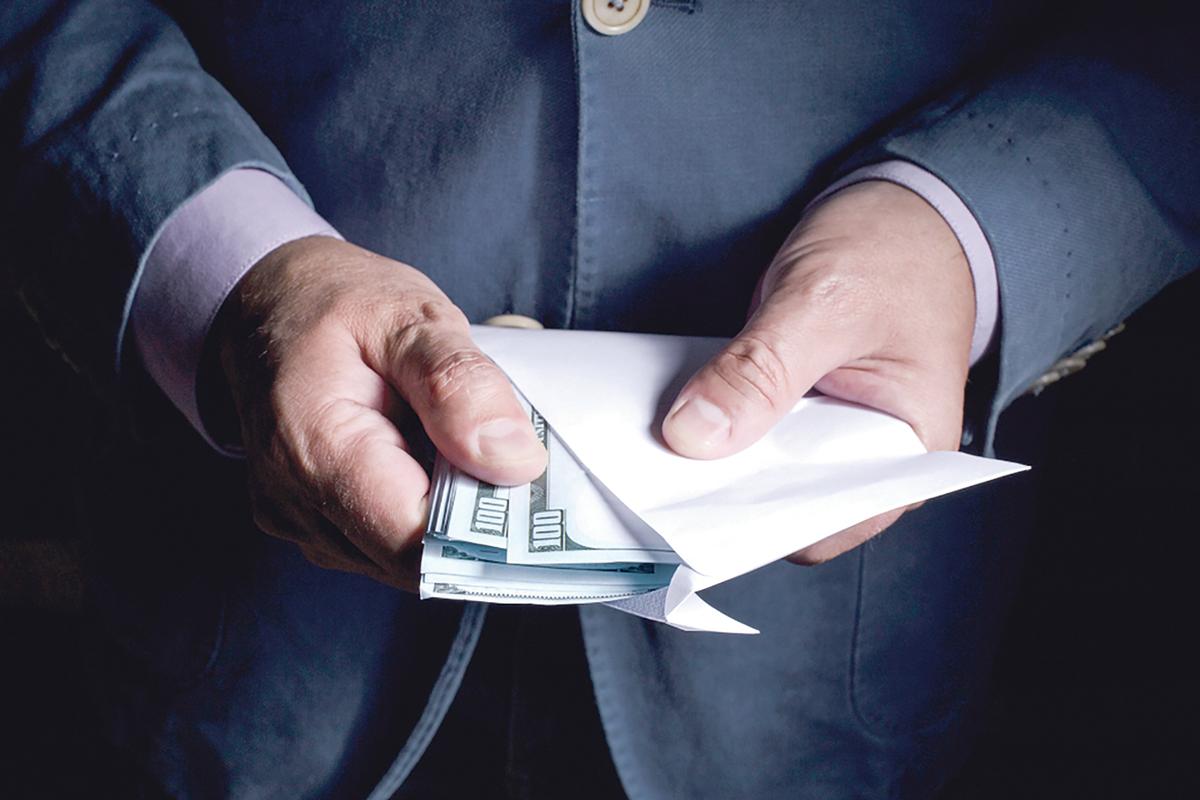 No in-depth analysis of how these professionals could be used for money laundering purposes had been finalised and shared with the relevant stakeholders by the time of the review.

However, the evaluation team could not fully assess the effectiveness of this mechanism. Nevertheless, there were shortcomings in Malta’s approach, which could call into question the accuracy of beneficial ownership information held on  Maltese legal persons.

Moreover, the potential fines for failing to submit relevant information were not considered dissuasive and proportionate.

The report says that Maltese authorities had only “recently” instituted a few investigations into financing of terrorism, but it was difficult to assess whether these were consistent with the country’s risk profile as no up-to-date and exhaustive risk assessment had been provided.

There had not yet been any prosecutions or convictions for terrorism financing in Malta.

While the actions undertaken by the authorities were not fully in line with Malta’s possible risks, the assessment  team noted some recent efforts to rectify this. 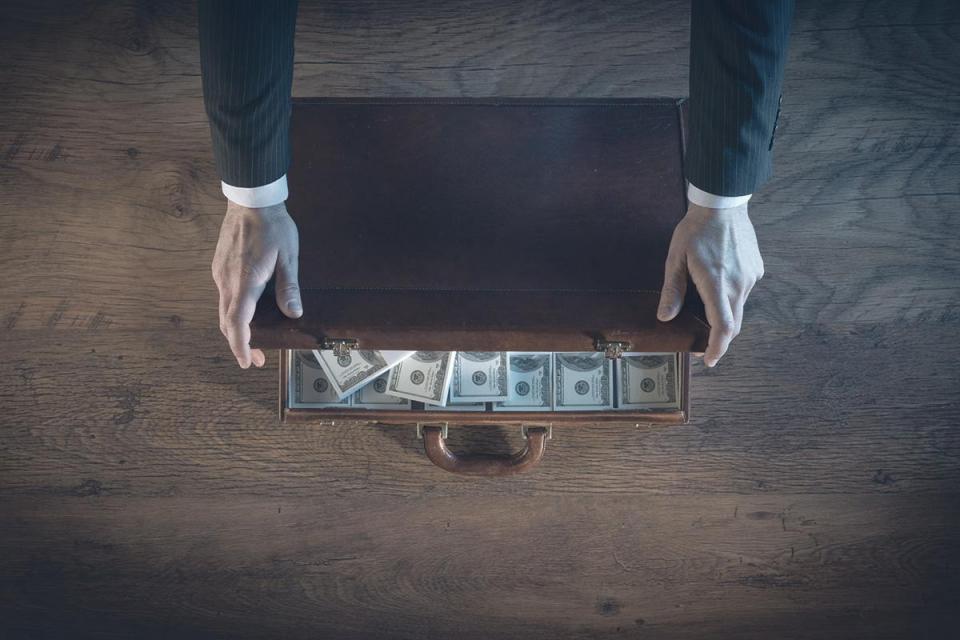 What is money laundering?

Money laundering is the process by which criminal proceeds are ‘cleaned’ so that their illegal origins are hidden.

It is usually associated with the types of organised crime that generate huge profits in cash, such as trafficking in drugs, weapons, or people, as well as fraud.

Although it is not possible to measure money laundering in the same way as legitimate economic activity, the scale of the problem is considered to be enormous. 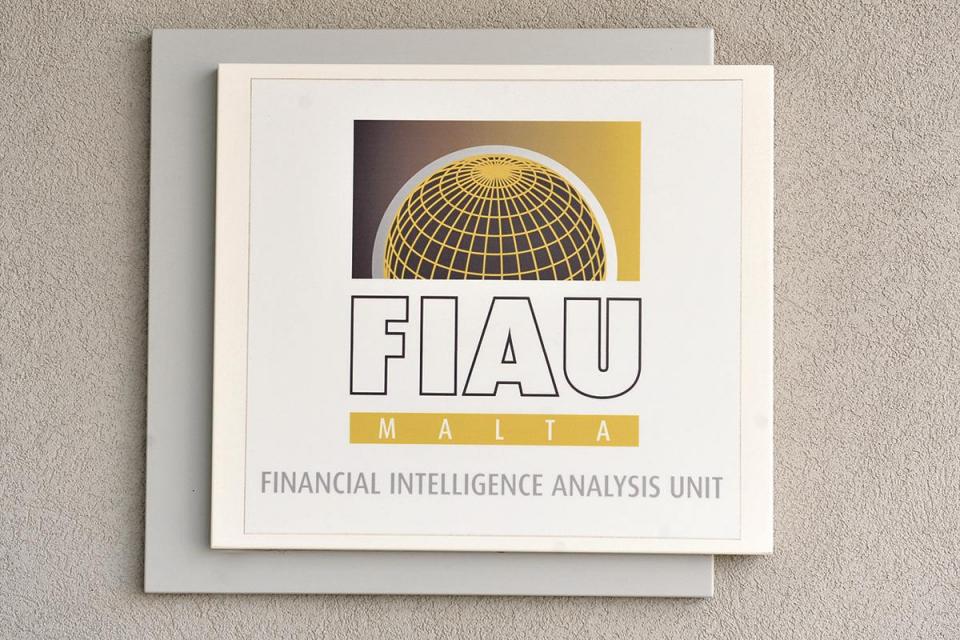 According to the report, Malta needs to immediately;

■ analyse the main offences associated with foreign proceeds of crime;

■ analyse the risks posed by legal persons and arrangements;

■ analyse the money laundering implications of corruption, tax evasion and the shadow economy

■ assess the vulnerabilities of the Fintech sector, including virtual assets.

• Develop an anti-money laundering strategy for investigation, prosecution and ensure that the police is reinforced with human and technical resources to be able to investigate highlevel and complex cases.

• Ensure that the FIAU and the supervisory bodies have sufficient resources and expertise to ensure effective supervision.

• Ensure the supervisory authorities introduce a more coherent and comprehensive system to assess the risks and level of compliance in the private sector.

• The FIAU should reconsider its analytical process to ensure that the shortcomings identified (such as the length of the analytical procedures or the huge disproportion of received reports) do not impact the overall effectiveness.

• The authorities should increase outreach and develop guidelines and red flags for subject persons to improve the quality and quantity of suspicious activity reports.

• Give competent authorities a written policy on confiscation of proceeds of crime.

• The Asset Recovery Bureau should become fully operational and be developed into an efficient tool for the tracing and management of assets, supported by resources and training for the authorities involved.

• Ensure the authorities have a greater understanding of the money laundering vulnerabilities of Maltese legal persons.