In a report issued late on Tuesday, it praised the country for the growth and divisification of its economy, adding that the negative outlook reflected a significant increase in the government's debt burden, as well as uncertainties tied to the broader economic recovery, particularly the recovery of the tourism sector. It also reflects the addition of Malta to the “grey list” of the Financial ActionTask Force (FATF) over concerns related to anti-money laundering supervision.

The ratings agency had changed Malta's outlook from stable to negative in August last year. 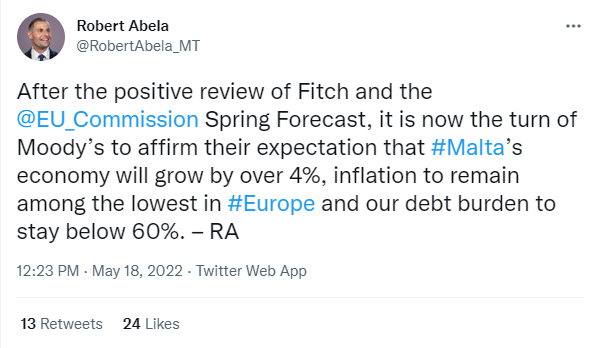 In its latest report, Moody's said that it expects the Maltese economy to grow by 4.2% of GDP in 2022, a relatively robust rate in light of the weakening economic outlook in Europe. Domestic consumption and investment will be important drivers of growth. The pace of economic expansion this year will also be dependent on the extent to which tourism arrivals in Malta begin approaching pre-pandemic levels.

Although Malta’s direct exposure to economic spillover effects from the Russia-Ukraine conflict is limited, the impact of the military conflict on growth and inflation across much of Europe risks also weighing on Malta’s growth outlook for 2022, it adds.

Inflation is estimated to have reached 4.9% in April, up from 2.6% in December 2021. Despite the increase,  Malta’s current rate of inflation is among the lowest in the euro area and clearly below the 7.5% figure for the euro area as a whole in April, Moody's observes.

It  said it expects the deficit will remain elevated in 2022 – but the debt burden is likely to stay below sixty percent of GDP.

"The continued economic rebound and gradual phasing out of pandemic-related support measures will drive an improvement in the public finances this year," it says.

It said it expects the government debt to stand at 59.5% of GDP at the end of 2022, markedly below its own August 2021 forecast of debt at 68.2% of GDP in 2022, due to much higher economic growth and a significantly lower deficit in 2021 than we had previously forecast.

Malta making progress towards being removed from grey-listing

The efforts made by the Maltese government were recognized by FATF at its February 2022 plenary, when it was assessed that Malta had substantially completed its action plan. This was followed by an on-site visit by FATF and MoneyVal to Malta in April to verify that the implementation of the key reforms of the action plan were being implemented and sustained and that the political commitment to sustain implementation and further improvements remained in place. A formal decision on whether to remove Malta from the grey list could at the earliest come at the FATF plenary in June this year.

The key measures adopted as part of Malta’s action plan have focused on improving the accuracy of its beneficial ownership regime, enhancing the use of the Financial Intelligence Unit (FIU) in pursuing criminal tax and related money laundering cases, as well as increasing the focus of FIU’s analysis on these types of issues.