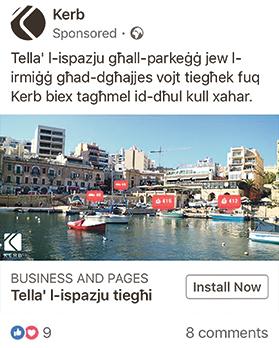 Eyebrows were immediately raised when Kerb, an international digital company also operating in Malta, started marketing buoys in various bays, insisting that owners could now monetise their permits when not using their mooring spots.

Encouraging boat users to resort to their online application, the company said it was using the latest satellite technology to indicate which buoys were temporarily available and how much it would cost to ‘lease’ it for a few hours or days.

What the company apparently did not know was that, in Malta, such practice was not possible as it was illegal.

When contacted, a spokesman for Transport Malta noted that, according to Maltese laws, a mooring permit was awarded to an individual for a particular boat.

Permit cannot be transferred to other individuals

“Such a permit cannot be transferred to other individuals, not even temporarily, as seems to be implied in the case of this particular application,” the spokesman said, insisting the authorities were investigating.

This newspaper is informed that the ‘new service’ must have been an oversight by Kerb Malta and, in fact, the advert is not online any longer.

Describing itself as the “Parking Airbnb”, Kerb states that, through its applications, people trying to find a parking, at least on land, can do so through their application. It highlights the possibility that owners of private parking spaces can now also trade their “unused” places.

According to the company, its systems are already highly used in hundreds of cities across the globe, from Asia to the US.