Three in every four foreign investors believe Malta is an attractive destination to invest in, although trust in the country’s political and regulatory transparency and stability is far lower than it was a few years ago, a survey of top executives has found.

The EY Attractiveness Survey 2019 found that foreign-owned firms are most keen on Malta developing its education and skills base and investing in digital technology and infrastructure.

Just 46% of respondents said they were happy with the stability and transparency of Malta’s political, legal and regulatory framework – two percentage points higher than the 2018 survey result, but a massive decline from the 85% result registered in 2015.

Despite their concerns, however, 80% of respondents said they expected to still be operating in Malta in 10 years’ time, with just 2% saying they do not expect to have a presence in the country by then. That was the best result to that question in the past five years.

"An ever-growing majority of respondents report that they are having trouble finding enough people with the right skills," noted EY Malta managing partner Ronald Attard.

"The quality and cost of our labour is no longer our big selling point".

EY’s annual Attractiveness survey asks top executives at foreign-owned firms in Malta what they believe are the country’s strongest and weakest points from an investor’s perspective. The survey looks at which sectors are thriving, why and what changes investors expect to see in the near future.

The global firm conducts similar surveys in countries across the globe and also issues regional reports. Its 2019 report for Europe found that FDI was down by 4 percentage points, Europe-wide, though the continent is now considered more attractive to foreign investors than at any other point during the past decade.

86% of respondents cited Malta’s corporate taxation framework as a pull factor for FDI. Social stability (75%), telecommunications infrastructure (72%) and the potential to increase productivity (63%) were also frequently cited as reasons for investing in Malta.

73% said they believed Malta is keeping pace with regulatory changes in other countries. That figure is high, but it is also 10 percentage points lower than the result in 2018, suggesting Malta’s first-mover advantage in sectors like blockchain and Artificial Intelligence could be waning.

The same share of investors – 73% – said they were managing to retain their specialised personnel. Again, however, that figure was 8 percentage points lower than in 2018.

43% of respondents feel the country’s transport and logistics infrastructure is not at all attractive to foreign investors – a result that makes it Malta’s biggest Achilles’ heel by quite some distance.

One in every four investors – 24% – say the country’s regulatory, political and legal frameworks are unattractive to foreign investors. The exact same percentage said labour costs were a disincentive to investing in Malta. 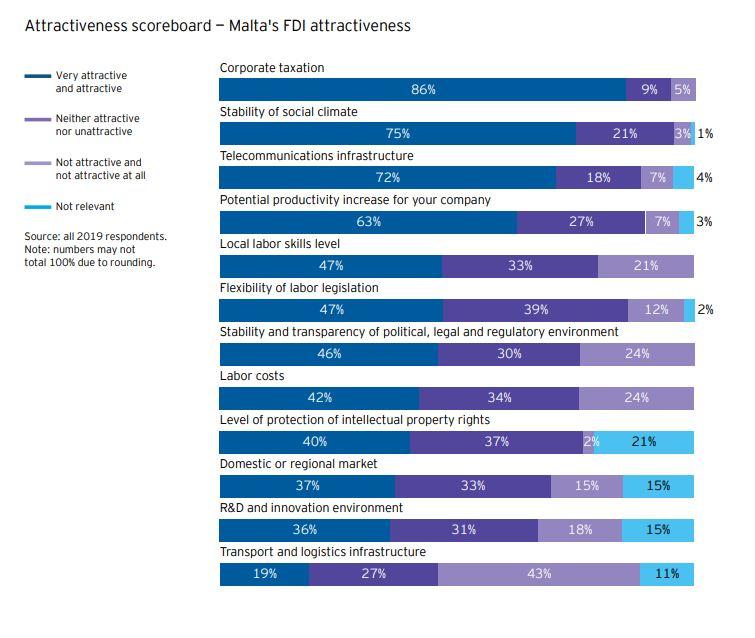 Other factors which respondents said were unattractive to foreign investors were the country’s labour skills levels (21%) and its research and development and innovation environment (18%).

What do investors want?

Investors want policy-makers to focus their efforts on upskilling the workforce to ensure they have the digital skills needed for modern-day industries (67%) and to invest in digital technologies and infrastructure (63%).

Many (63%) fear talent shortages will prove to be Malta’s biggest stumbling block in attracting foreign investment. A majority (65%) said skill shortages were their biggest obstacle to expanding their Malta operations.

A rapidly growing percentage of foreign investors (49%) expect Malta to encourage environmental policies and attitudes. Two years ago, just 29% had cited that as a concern.

Companies would also like to see a reduction in labour costs (28%).

As previously mentioned, the vast majority (80%) believe they will still be in Malta in a decade’s time. 54% – an increase of 6 percentage points – believe Malta will be attractive to foreign investment in three years’ time. The ICT, insurance and financial services sectors are the most bullish about Malta’s prospects.

Foreign investors expect Malta’s growth to be primarily driven by igaming (58%) the tourism and leisure sectors (56%) and blockchain (50%).

The technologies expected to have the biggest impact on respondents’ businesses are process automation (64%), computing advancements (63%) and the Internet of Things (27%).

Read the full EY Malta Attractiveness Survey 2019 in the PDF below.