Christmas looks set to take on a different spirit this year, with the majority of people planning to stay home in the midst of the pandemic, according to a Times of Malta survey.

As COVID-19 continues to spread, the health authorities have been asking for sacrifices to be made over the Christmas period, asking people to limit their contacts with those outside their households.

And it looks like many are taking the message seriously. Just over half the respondents to a survey (53 per cent) said they would be celebrating Christmas at home alone or with their partner. 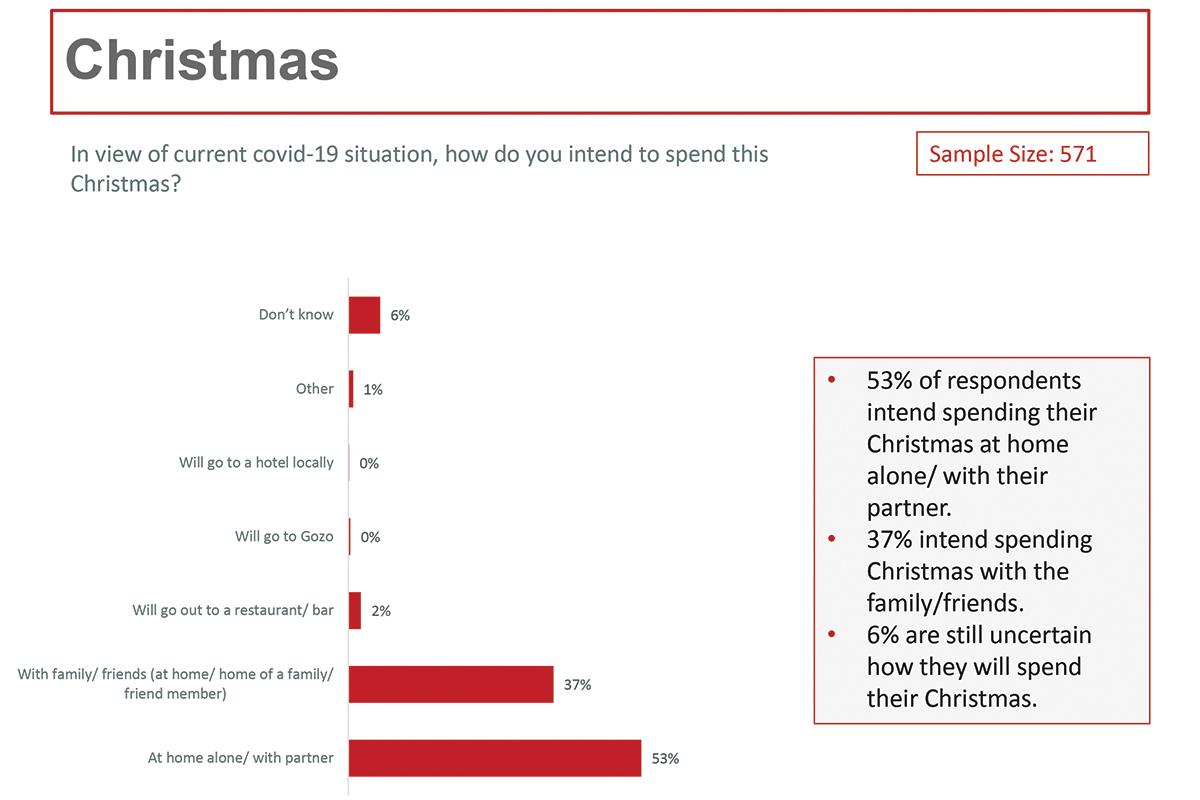 However, 37 per cent still intend to spend it with family and friends, while six per cent are unsure and the rest will do other activities, according to the survey carried out by advisory firm EMCS.

As the economic impact of the pandemic continues to bite, over a third (38 per cent) intend to spend less money than usual this Christmas. 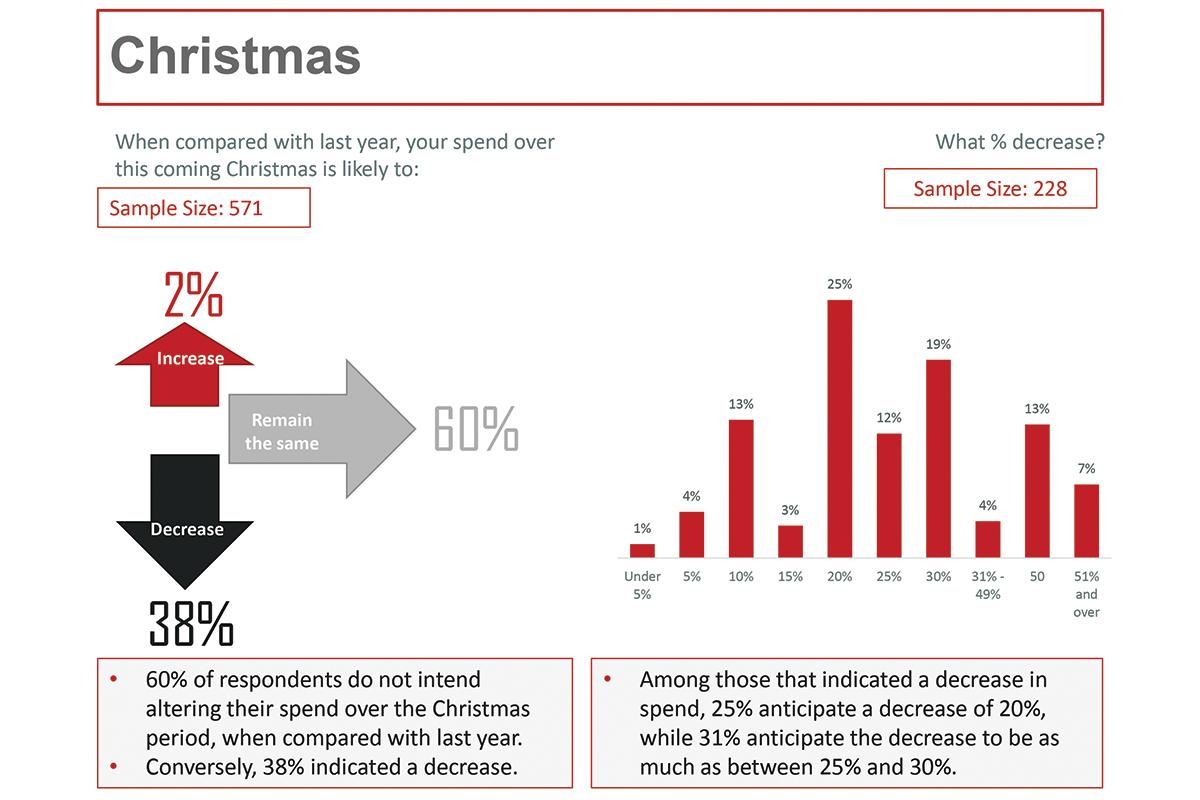 On the other hand, spending patterns for 60 per cent of respondents will remain unchanged compared to last year.

Two per cent want to splurge more than they usually do over the holiday season.

A marked divergence emerges from the survey between perceptions of how the government has handled the pandemic from an economic standpoint and from the health perspective. 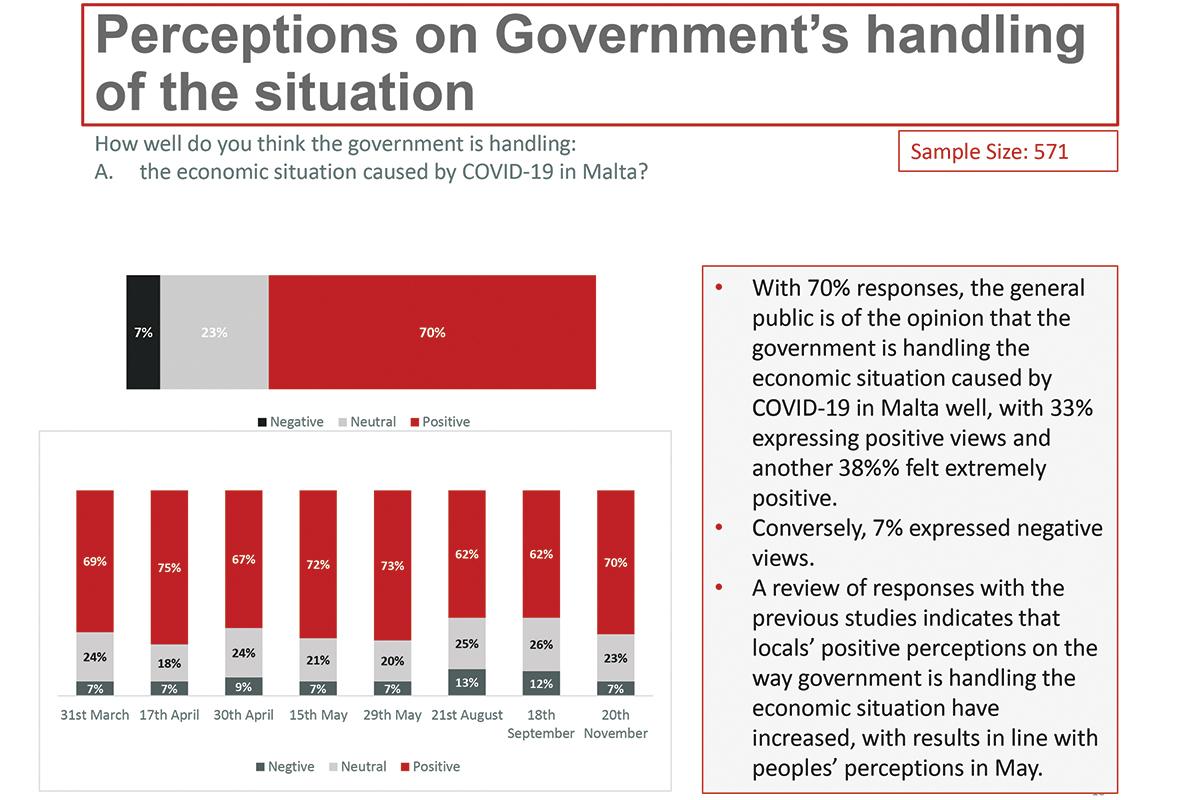 Whereas 70 per cent of people feel positive about the way the government has handled the economy, that figure goes down to 43 per cent on the health front

The positive perception of how the government is handling the health situation has plunged from a high of 94 per cent in April, when Malta’s schools and ports were closed and non-essential shops had to close. 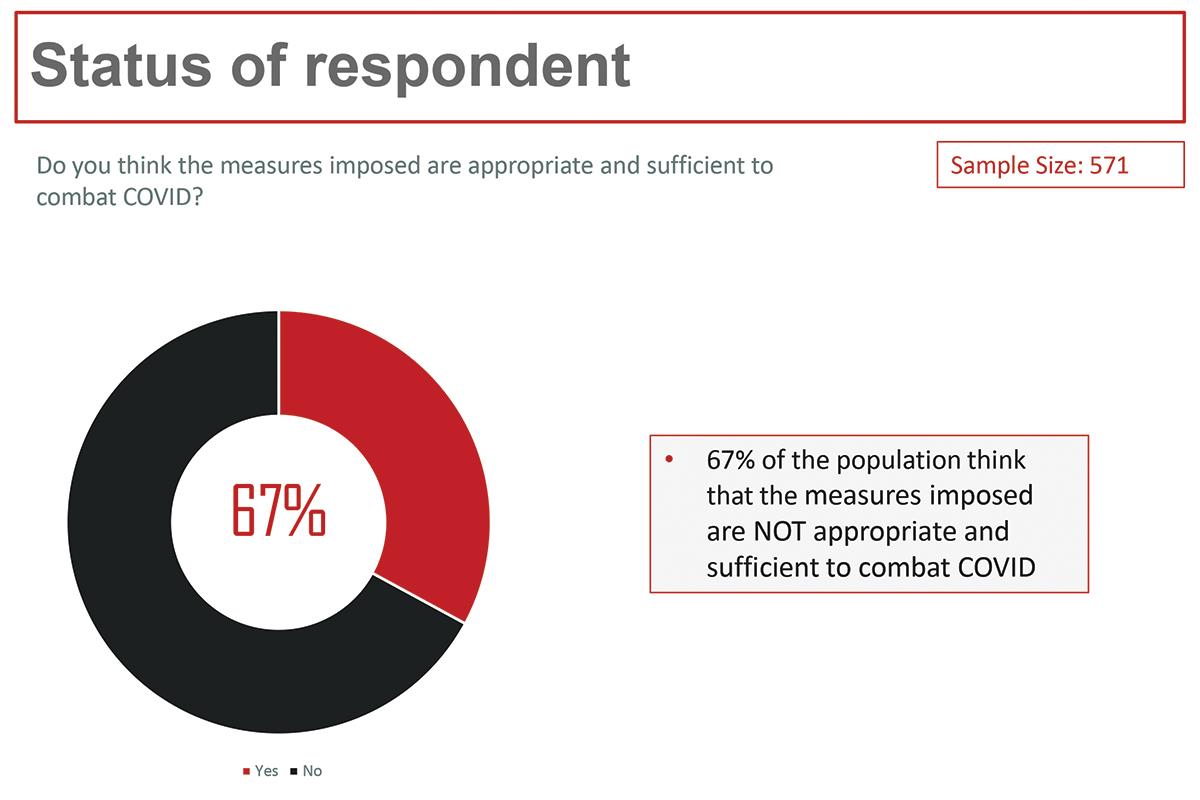 Just over two-thirds of the population (67 per cent) now think that the measures in place are not appropriate or sufficient to combat COVID-19.

Last month, the government announced the closure of bars and placed restrictions on group gatherings until December in response to the spike in infections. The pandemic has hit employees hard, with a quarter of employed respondents saying they are still working fewer hours. 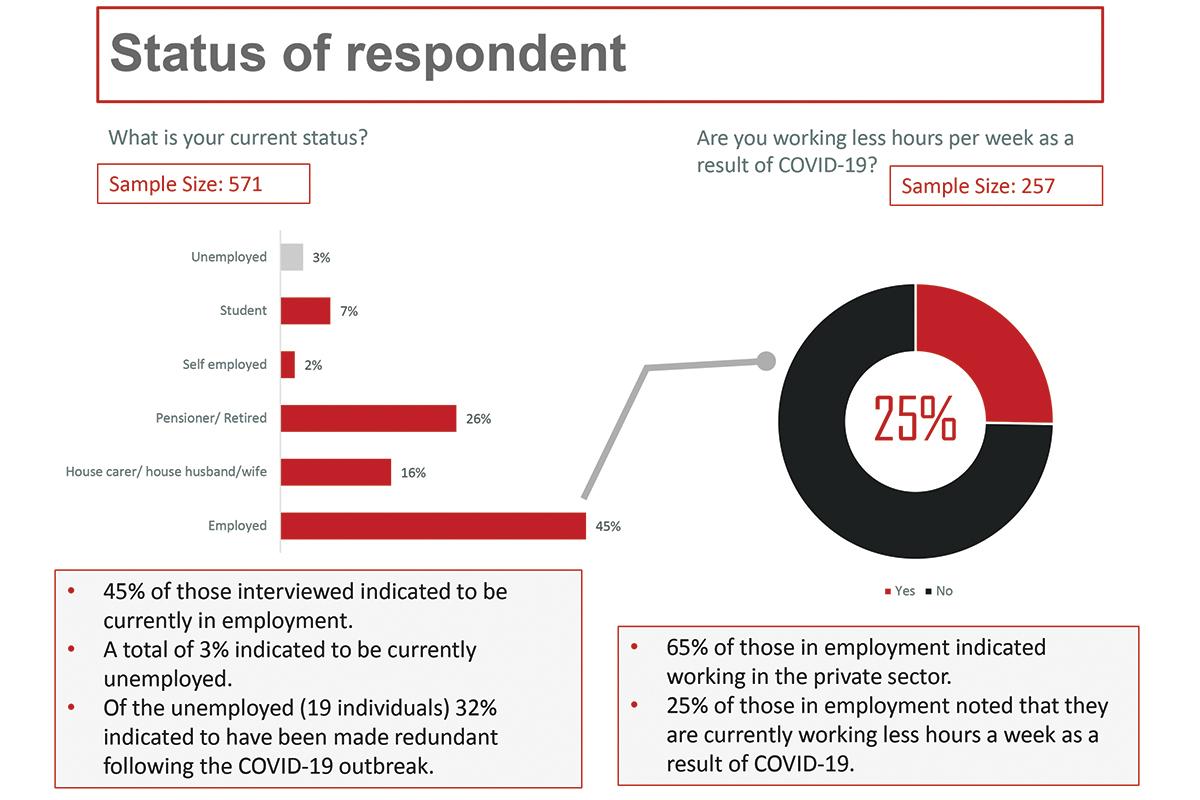 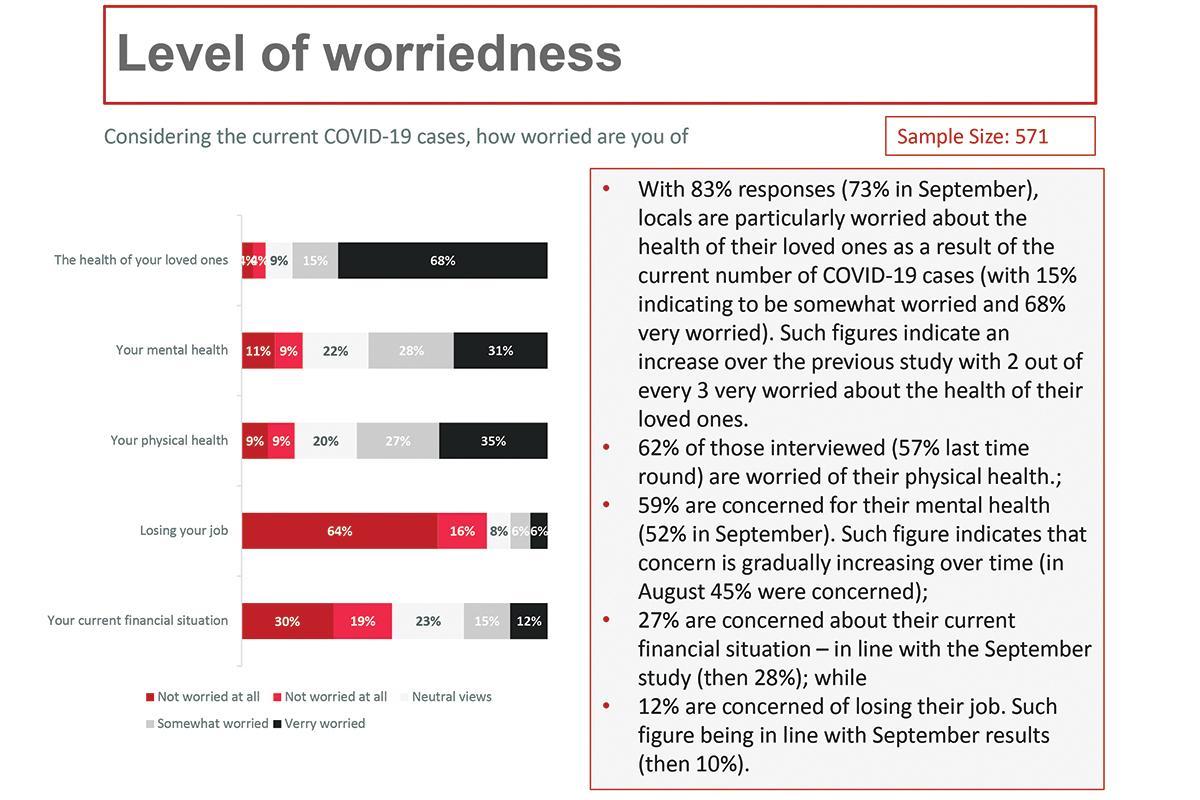 Just over a tenth (12 per cent) are worried about losing their job.

At this stage, people are less concerned about their financial situation, with 27 per cent expressing money worries, in line with the figure from the September survey.

COVID-19 continues to weigh heavily on people’s concerns over health though, with 83 per cent of all respondents saying they are worried about the health of their loved ones in light of the increase in infections.

This represents a 10 per cent increase from the last survey carried out in September.

A total of 62 per cent of those interviewed are worried about their own physical health, up from 57 per cent last time round.

Furthermore, 59 per cent are worried about their mental health, up from 52 per cent in September and 45 per cent in August.

As global optimism rises about an effective COVID-19 vaccine being made available in the coming months, 64 per cent of respondents said they would take such a vaccine, although 28 per cent of these would prefer to wait a few months before doing so.

Only seven per cent have no intention of taking it, while 23 per cent are still unsure and six per cent would wait for the time being. 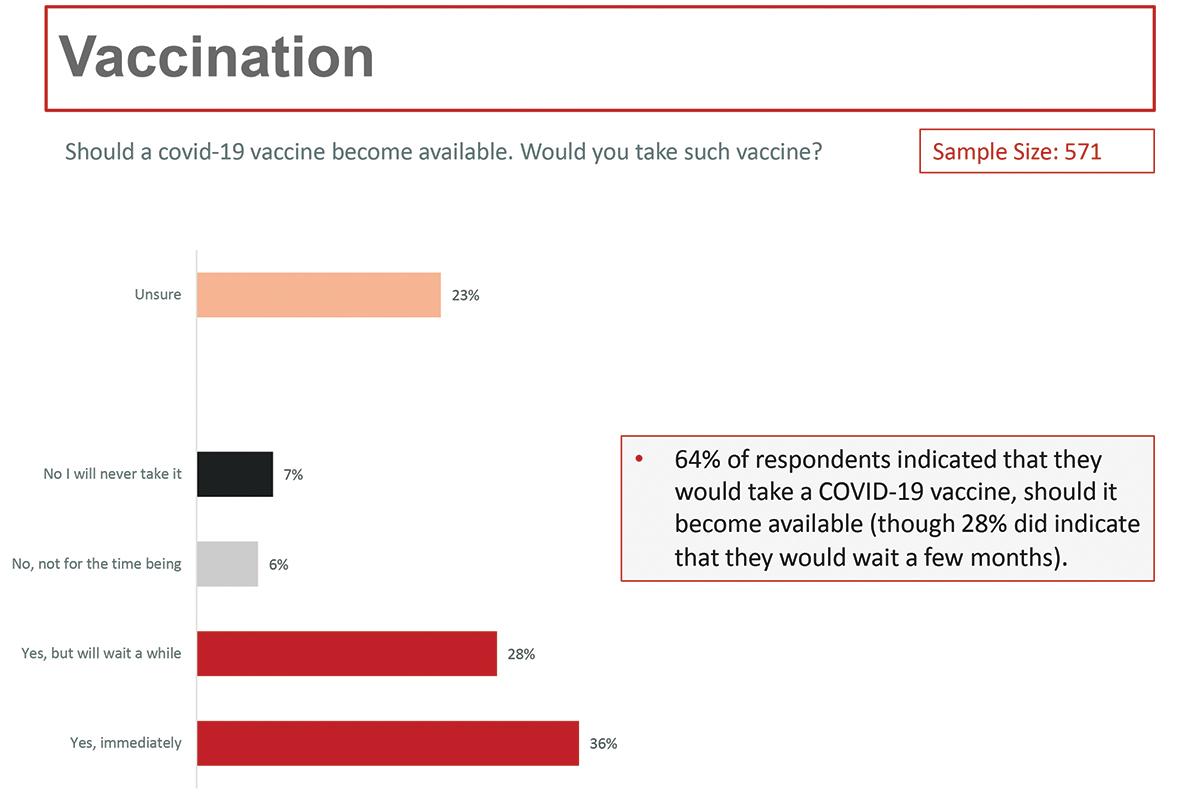 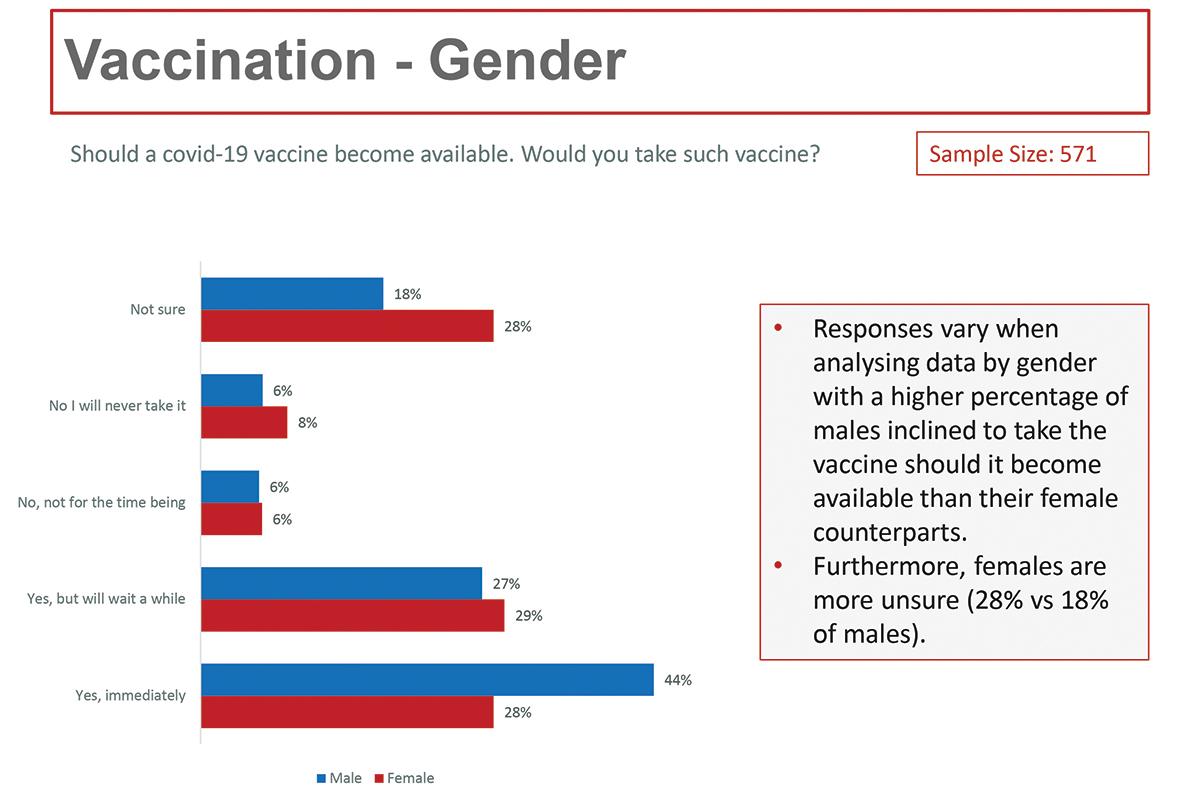 • 53 per cent will be staying home this Christmas.

• 60 per cent plan to spend the same amount of money as last year.

• 43 per cent are positive about how the health aspect has been handled.

• 70 per cent gave the thumbs up to the government’s handling of the economy during the pandemic.

• 67 per cent feel the measures in place are not sufficient to combat COVID-19.

The research study was carried out between November 12 and November 19. A total of 571 surveys were collated and analysed. The survey has a margin of error  +/- 4.1 per cent at a  95 per cent confidence interval.