A motorist has been jailed for three years and banned from driving for another two after being convicted of killing a pedestrian when he drove onto a pavement at 100km/h while drunk.

The incident happened in Balluta just before 5am on July 6, 2018.

Michael Caruana Turner, 24, was found guilty of having killed Dutchman Tim Scholten, 19, and injured seven other people through reckless driving while drunk. Scholten had succumbed to his injuries two days after the accident.

The other injured people included a 25-year-old Englishman who was seriously injured, three Dutchmen and another Briton. All were aged between 19 and 25.

The court had heard how Turner, 20, a fitness coach from Birkirkara, had fled the scene and was running towards San Ġwann when he was stopped by the police.

An officer from the St Julian’s police station described the scene of total devastation which he found upon reaching the incident site.

Injured victims lay on both sides of the car and on the street when the vehicle had crashed headlong into a lamppost, sending its concrete base over the railing onto the seaward side. 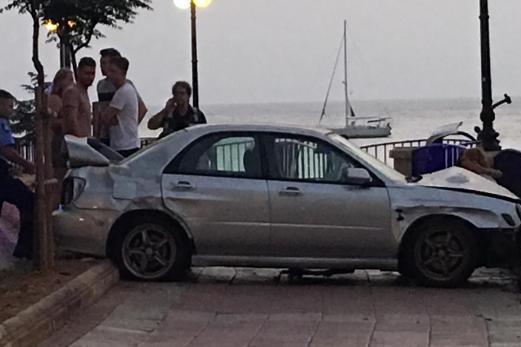 Prosecuting senior inspector Trevor Micallef later testified that the motorist was arrested and taken to the St Julian’s police station, where a breathalyzer test revealed that he was above the legal alcohol limit for motorists. He was later taken to hospital for treatment.

Caruana had written a  statement expressing remorse: "I hate myself because he died because of me. I cannot forgive myself. I’m sorry for everyone involved," he said.

“I am destroyed that he has lost his life,” he added, referring to the victim.

“I saw his photo. He seemed a good person.”

Defence lawyer Joe Giglio had explained in court how Caruana had felt tired but since it was only a four-minute drive to his grandmother's, he felt he could do it.

In handing down sentence, Magistrate Gabriella Vella observed that the accused was out drinking in Paceville before the incident.

The accused himself acknowledged that he had a beer and six shots of tequila. When he eventually decided to leave and go home, he opted to drive to his grandmother’s house in Balluta to go to sleep there since he did not feel up to driving all the way to Birkirkara, where he lived.

"Even though the accused felt he was not fit to drive he got into his car and
drove from Paceville towards Balluta, passing through Gorg Borg Olivier Street, St. Julian’s. He was driving at a speed of around 100km/h and at a certain point he clipped the pavement on the left hand side of the road, mounted the pavement, destroyed street furnishings and trees that were on the said pavement and mowed down a number of pedestrians who were walking on the pavement on their way home."

The car continued moving forward until it eventually stopped some distance further down from the point of impact, completely blocking the pavement. It left
brake marks of 12.09 metres.

The accused had a level of 78.7𝜇g per 100mL of alcohol in his breath, a level which is well over the prescribed limits in terms of law.

The magistrate said that the accused, driving under the influence of alcohol and at excessive speed, had effectively used his vehicle as an offensive weapon that injured a number of pedestrians and caused the death of a 19-year-old youth who, with the other pedestrians, was walking on the pavement on his way home.

The evidence proved beyond reasonable doubt that there had been negligence, recklessness and dangerous driving on the part of the accused.

"The fact that the accused himself was relatively young when the accident happened and that he has a clean conviction sheet do not in any way minimise the effect of what he did.

"The fact that the accused comes from a stable family and also seems to have a stable job and is also seeking help to come to terms with what happened, do not in any way render him less responsible and culpable for his negligence, recklessness and dangerous driving," the court said.