Farmers and activists have staged a protest in Dingli where they claim the government is trying to turn farmland into a road, without telling any residents.

Around 25 people, including Moviment Graffitti NGO activists, gathered in Daħla tas-Sienja on Friday morning to stop workers building a road that will connect the alley to Triq Don Bosco.

Workers eventually drove off in heavy machinery which had been taken to the alley to pave the way for a new road at around 12.30pm. No works were carried out.

According to the NGO, the roads agency Infrastructure Malta is building the road without any permits. The agency insists no permits are needed because it was already included as part of a "schemed (planned) road" in the Planning Authority's local plans.

Gerald Lapira, owner of one of the fields, urged Infrastructure Minister Ian Borg, also from Dingli, to join the residents and protect the countryside in his hometown.

Lapira said he was informed a few days ago that Infrastructure Malta officials wanted to meet him and subsequently learned that a road had been planned through his land.

“I don’t understand why they have insisted on starting works without a permit and without residents and landowners being consulted," he said.

“This is a project that needs to be planned and not for us to wake up in the morning to find heavy machinery on our doorstep.”

“I am a farmer, look,” he said, gesturing at his hands.

“Without water how can I water my crops in summer if they’re going to build a road over my well? Then what will you and you children eat?”

The farmer questioned whether authorities knew what they were doing when ground markings seemed to indicate that they would be running heavy machinery over natural waterways.

“This is how we’re judging progress now, by GDP not by quality of life,” he continued.

“I am here because I am a farmer and I care about farms and people and the chemicals that are in your children’s food. The soil is the only thing that is going to offset the CO2 that we’ve already released into the air, not electric cars or reducing emissions.”

“The only thing that is going to offset CO2 is growing plants and trees and you [the authorities] are tearing them down, not just here but everywhere.”

“We’re sick and tired! What will I do when I have no water? Register for unemployment," he asked.

Another woman, whose family runs a farm that will be affected by the project told Times of Malta they were shocked to see heavy machinery on the road on Friday.

"We woke up this morning to find construction vehicles in the road. We don't know what is going on," she said.

“This is not right. This land that we own. It is arable and farmed and is the source of our livelihood.

“How can they come up and expect to run roads over us when we were not consulted and there are no plans?" she asked.

A spokesperson for Moviment Graffitti said Infrastructure Malta was "bullying residents and farmers once again and is doing so illegally". He told Times of Malta that while part of the plot of land belonged to the government, that rest was private property in use by farmers and the decision will affect their livelihoods. 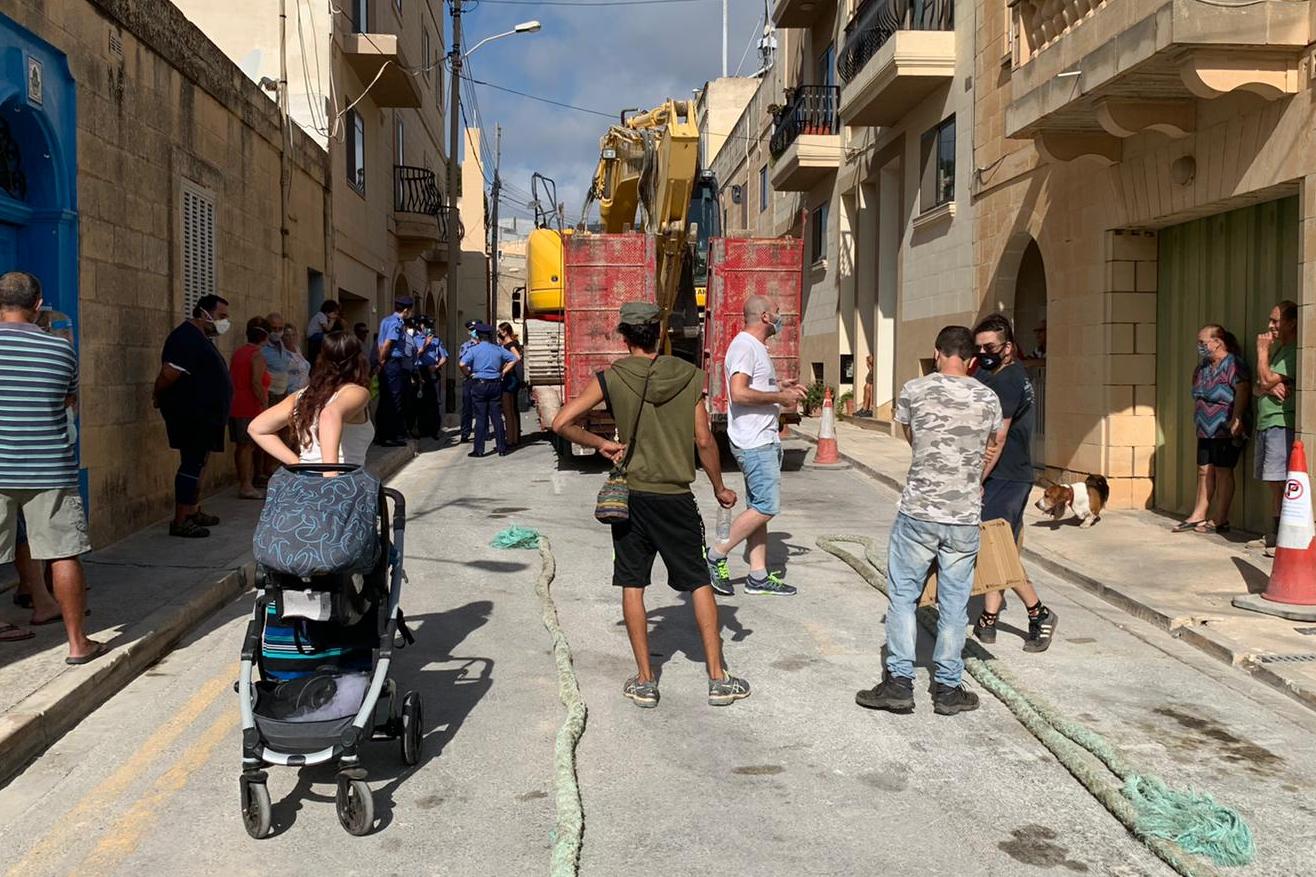 Infrastructure Malta said the street had been planned for years and residents in Sqaq il-MUSEUM and other nearby areas in Dingli have long been calling for the formation of the road to improve connectivity and to create a safer access, including for emergency vehicles.

"The narrow section of Sqaq il-MUSEUM is located within Dingli’s urban conservation area, with old buildings on either side and cannot be widened. The only way this street can have a safer access is through the opening of the new street connecting it with Dahla tas-Sienja Street and San Gwann Bosco," it said.

"As per applicable regulations, no development permits are required for the formation of new roads within development zones that are already included as schemed (planned) roads in the Planning Authority’s local plans, as is the case for the new street between Dahla tas-Sienja and Sqaq il-MUSEUM."

It said the 100 metre long street "has been schemed to be formed years ago" and that land owners had been aware about it for many years.

It said Infrastructure Malta had taken note of the concerns and had begun talks with land owners and tenants. Three trees would need to be uprooted and would be replaced with planting of others, it said.

Azzopardi insisting that the road is needed in case of an emergency. Video: Jessica Arena

The PN said in a statement that it would have been wiser to have held discussions with the residents and farmers concerned prior to embarking on the works even in view of the fact that agricultural land in Malta was on the decline and there was a lack of open spaces.

Although road construction was necessary, it was important that everyone was informed of what was being done beforehand and wide consultation was carried out.

The government’s action reflected an arrogance where the underdogs were constantly being trampled upon, it said.