It had to be the coronavirus to temporarily close a 135-year-old record store that did not even stop trading when Malta was blitzed during World War II and also survived the Spanish flu.

But D’Amato Records, dubbed the world’s oldest, has been through much worse than COVID-19 and was probably hardest hit by the outbreak of the MP3, which still did not threaten its survival, says third-generation owner Anthony D’Amato.

Even then, despite tough decisions and the closure of shops, not for a second did they think it was game over; and that would explain D’Amato’s resilience in the face of today’s scenario.

Vinyls proceeded to pick up in a big way. And the bad days for record stores are over. “But we did not have a clue they would be,” he admits.

“Back then, we did not know what the future held. With the pandemic, we can at least make future predictions. We can foretell the worst-case scenario; we know tourists will return and that we do not have to rebuild a whole city.”

For the first time since 1885, D’Amato Records pulled down it shutters for six weeks while non-essential services were stopped, and focused on online sales until re-opening on Monday as measures to combat the pandemic started being eased.

The “holy grail of record shops” on the international scene, it is now back in business and has a message for Valletta stores, encouraging everyone to open and “get on with it”.

D’Amato says it is a pity some shops are still shut after the hiatus and maintains this could affect the morale and dampen spirits, slowing down economic recovery.

“Unless we make a collective effort, everyone will suffer. We are obviously prepared for a quiet month ahead, and it hurts more now than during the lockdown as we face reality. We are not expecting anything close to what we were. But should we throw in the towel?”

That was never an option, and letters dating back to 1942, discussing royalty issues when records were lost at sea during the war, show how it was business as usual – albeit slower – back then too. 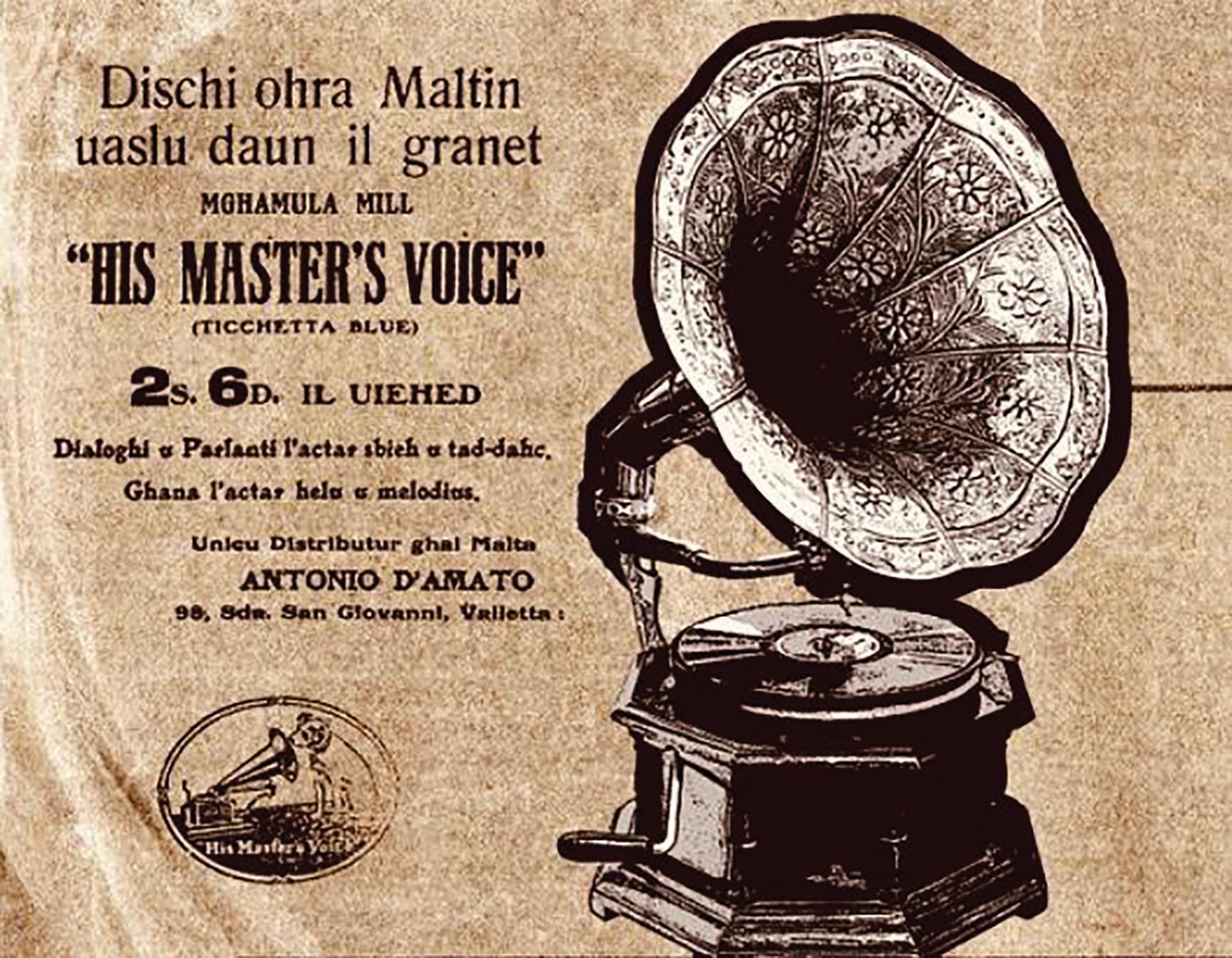 An advert for D’Amato Records.

D’Amato’s dad, who has been working in the shop since 1960 – come recession or four decades of rampant piracy – cannot recall a single instance when the store closed.

Clients have popped in every other week for the last 60 years, with major private collections amounting to 60,000 records – enough to fill a whole apartment; while tourists put on their itinerary D’Amato Records, renowned for being “specialised” and able to source any vinyl from somewhere.

Customers need their regular fix and missed it, says D’Amato. “So, we tried to reinvent ourselves during the lockdown. The Facebook shop was a hidden opportunity we would have otherwise been too lazy to explore. It has worked and we will now invest more in it,” he continues.

His approach to the current situation is that “everyone has to make sacrifices” and that it all hinges on attitude and a bit of help.

“If we continue with a demoralising outlook, Valletta will be the last place to take off. People use public transport to come to the capital. Unless all shops are open, they will have no reason to,” he said, pointing to a closed arcade in what he deemed to be the busiest crossroads of St John with Republic Street. 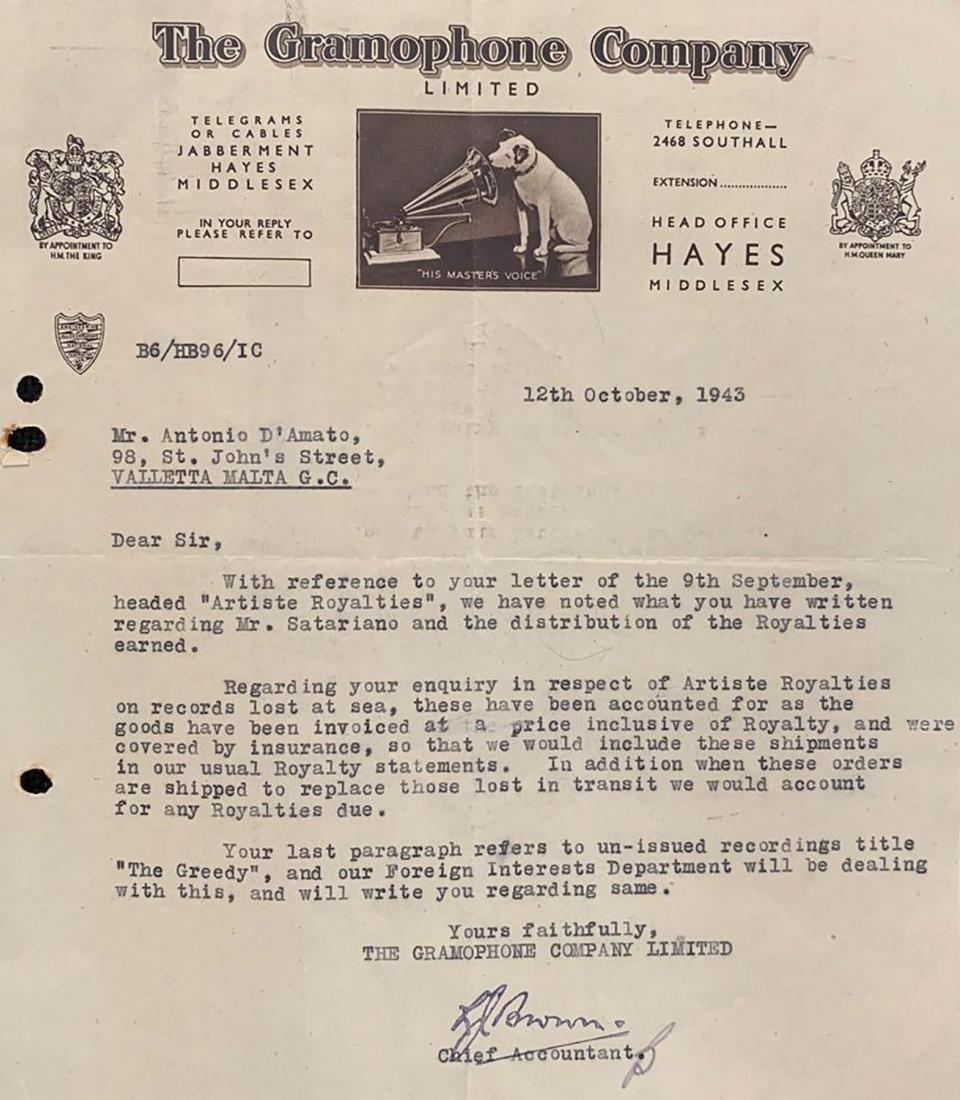 A letter from the Gramophone Company.

As landlords, they have waived rent from other shops. “We are both shop and property owners so we understand the trouble others can be in. Charging rent in an imposed lockdown is immoral,” D’Amato maintains.

“If people do not help in these times, we will just go from struggle to struggle when we would come out of this much faster.”

The business put its money where its mouth was even back in WWII, being one of four companies that continued advertising with The Times, records show.

But comparing the pandemic to a war-time crisis was “exaggerated” in his view, and an old photo of the premises, showing demolished buildings just up the recognisable Valletta road, says it all.

Financially, it would probably be more feasible to rent out the shop and stay at home, but this is a labour of love and D’Amato Records is part of their DNA. “We could not kill it off because we would be killing off a member of our family.”