The government must provide the nurses’ union with timelines for the Mount Carmel renovations by Wednesday, or risk being faced with industrial action, Times of Malta has learnt. 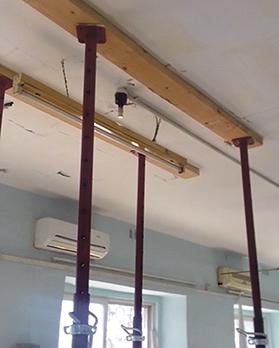 Construction jacks being used to support parts of the ceiling at risk of collapse.

The move comes in the wake of reports in Times of Malta that most of the wards at the country’s only mental health hospital have condemned ceilings. As a result, patients have been crammed into a few wards, with beds lined up too close to each other.

In comments to this newspaper on Tuesday, Malta Union of Midwives and Nurses (MUMN) president Paul Pace confirmed that a meeting with the government was scheduled for Wednesday.

During the meeting, the union will be asking for work timelines, as it had in the past. However this time around, if these are not provided, industrial action would follow.

Referring to comments on Monday by Health Minister Chris Fearne, who assured journalists that patients were safe at Mount Carmel and that the government had a five-year plan for the hospital, Mr Pace questioned how the wards could be considered “safe” when patients did not even have enough space to store their personal belongings.

“I fail to understand how the minister could insist that while the parts of the hospital with serious infrastructural problems have been evacuated, the remaining areas are safe.

“Nurses cannot care for their patients’ properly, because they cannot even access their beds. Those who are crammed in the few remaining wards are piled up so close to each other that they have to place their belongings on the floor because there is no space for a bedside table,” Mr Pace said.

He added it was unacceptable that the minister seemed to measure patients’ safety by whether a ceiling is condemned or not.

Photographs taken inside the hospital show scaffolding being used to support parts of the ceiling at risk of collapse. In some areas, architects have also instructed workers to install metal support jacks to hold old beams in place.

While saying that the easiest measure would be to instruct members to walk out of the dangerous building, constructed in 1861 and which he said was now just like a “pigsty”, Mr Pace insisted that nurses had a responsibility to their patients.

While all other entities seemed to be shirking all responsibility, the union would not do the same, he said.

“The condemned ceilings and close proximity of the beds, as well as the unusable offices and stairways, make giving proper nursing care very difficult. But there are patients that we need to think of before decisions are taken, Mr Pace said when pressed to state what kind of action the union could be mulling.

Patients have to place their belongings on the floor

The union head also dismissed comments by the minister that the government has a five-year plan for the hospital and that works are currently under way.

“We have been hearing this for years and yet we are still in the same situation we were three years ago, if not worse. Why are we still in the first year of this so-called five-year plan? The government claims to have allocated millions to refurbish Mount Carmel but we have yet to see any of this actually materialising,” Mr Pace went on.

While the minister was quick to mention the five-year plan when faced with questions on the hospital, the union head said, the government repeatedly denied the MUMN a copy of an architect’s report drawn up to identify the problems there.

On whether nurses were refusing to work at the hospital, Mr Pace confirmed that the situation was so dire that none of the staff were voluntarily opting to be assigned there.

Instead, he explained, fresh graduates who failed to make it to the top of their class were being placed at the hospital after all the other positions in other hospitals were taken up by those scoring higher marks.

“Everyone is quick to talk about stigma surrounding mental health issues but in reality, the problem is the hospital. People are likely to not speak up about their struggles because they fear being admitted to the run-down hospital,” Mr Pace went on.

In the meantime, a spokesperson for the Ministry of Health said 104 patients have been relocated from Mount Carmel Hospital to Casa Maria, Prince of Wales, Sliema.

“All patients were assessed by their consultant carer prior to the move. Casa Maria is licensed to host patients by the Directorate of Health Care Standards,” the spokesperson said.

“Mount Carmel today is a safer place, since all the structures have been reviewed and dangerous areas are closed for patients and staff.

“The ongoing project of refurbishing and restructuring at Mount Carmel Hospital will take a total of five years. We are in the first year of five. The project is proceeding according to plan, and by this summer two wards will be completely refurbished to house patients again,” the spokesperson said.

“The total cost of this project is estimated at €30 million; an unprecedented investment in the mental health field.”