The two leaders were on Friday expected to debate each other on Xarabank but according to Dr Delia Joseph Muscat declined the invitation.

However, Dr Muscat claimed that Dr Delia only started referring to the debate with him on Thursday.

But addressing supporters during a televised address on Monday, Dr Delia had referred to Xarabank's debate between the leaders. He also referred to it on Tuesday saying it would help people see who had the "best ideas and who cared about the little guy".

He kept mentioning the debate in political events throughout the week.

However, Dr Muscat told supporters the Opposition leader only mentioned the debate Thursday.

"Yesterday, I don’t know what came over him – he said he wanted a debate today as well,” the Prime Minister told supporters in Żurrieq.

"I hope that he stays calm and holds on to his argument, because next Wednesday, we can debate as much as we want. I have no problem with that,” the Prime Minister said. 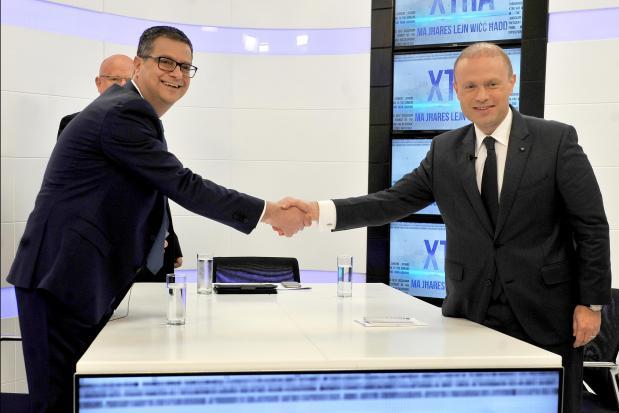 Dr Muscat said it was shameful that the Nationalist party MEPs refused to commit themselves to supporting the Maltese government’s nomination for EU Commissioner.

When (then Prime Minister) Lawrence Gonzi phoned him (Dr Muscat) and asked for Labour to support Tonio Borg’s nomination, Labour MEPs stood side by side with the government, Dr Musat said.

"I voted for Tonio Borg when he was nominated for the position, it was no problem, because he is Maltese like me and I want to help him,” he said.

Instead, the Maltese were now seeing a situation where people were not ashamed to work against their country, he added.

This is why we need to use May 25 to send a message to those that still think people want division,” he said.

During his speech, the Prime Minister encouraged young people to turn to professions that would help others.

A recent initiative to build a €3 million Caritas therapeutic centre for adolescents battling drug and alcohol addiction problems showed that the surplus was being used to help people, Dr Muscat said.

He said there were around 60 people under 18 who were victims of drug-use last year, adding that it was the government’s duty to see how it could save those lives.

“This is a project that is in favour of the life of hundreds of teenagers. You don’t just act and talk about supporting life, Dr Muscat said, in a clear dig at the PN’s pro-life arguments. You act in the right way to safeguard it, he added.

He also addressed Dr Delia’s comments on the Labour party belonging to the European Socialists’ family.

“It is an honour to be a socialist,” he said. “Socialists don’t just care about how they are doing, but about how those more disadvantaged than them are doing,” he added.

Dr Muscat once again reiterated his position that the upcoming European Parliament and local council elections were a choice between him and Dr Delia.

“Each vote for a Labour MEP is for Joseph Muscat and for the future of Malta,” he told supporters.