Speaking in Msida, Dr Delia claimed the Prime Minister had called for an inquiry into allegations that offshore company Egrant was owned by his wife Michelle Muscat "only to make a political statement".

The inquiry had found no evidence that Egrant belonged to Ms Muscat, noting declarations of trust given to the magistrate included false signatures.

The Prime Minister had said he will be deciding whether or not to publish the entire Egrant inquiry report once a court handed down a decision on whether the Opposition should have a copy.

A court on Tuesday denied that request and the Opposition said it would be appealing the decision.

Addressing supporters, Dr Delia said the Prime Minister should publish the report in full so that people can find out "what he and the Labour party are afraid of".

"The head of the Opposition has the duty to be a public watchdog," Dr Delia said. "That right was sanctioned today," he added.

MEP Francis Zammit Dimech, who also spoke during the event,  said the Opposition should turn to the European Court of Human Rights if the Maltese court turns down the appeal.

Dr Muscat had promised to publish the full Egrant inquiry, but he had broken that promise, he said.

He also said the government had captured institutions, making it crucial for everyone to vote in the European Parliament elections in May. 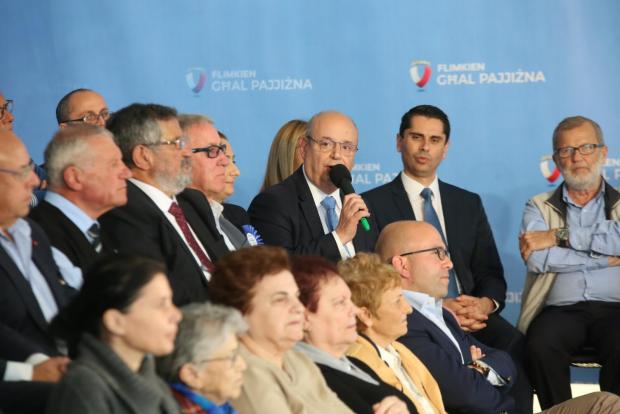 Muscat 'trying to capture Parliament as an institution'

Turning to other topics, the Opposition leader also accused the Prime Minister of trying "to capture Parliament under his control" by shutting down the institution.

Without the Opposition's prior knowledge, Parliament went into recess on Monday and would meet again after the European Parliament and local council elections.

The PN protested the move, saying it had not been informed and insisted the government was trying to put off a debate on the Embryo Protection Authority.

The Prime Minister said he was open to a debate about abortion, but shut down Parliament when that debate should have taken place, Dr Delia noted.

"We have one message for the Prime Minister," Dr Delia said. You can shut away inquiries but they will still see the light of day. You can shut down Parliament, but we will continue to speak out," he added.

"The Prime Minister thinks the country is not called Malta but Joseph Muscat," he said.

He invited the Prime Minister for a debate on Xarabank next Friday, saying the people would be able to see who had the "best ideas and who cared about the little guy".

Dr Delia reiterated calls for Msida to be a University town and a maritime centre.

The PN, he said, believed in the potential of Msida, a place that housed the Junior College and the University. Abroad, towns like this, were full of life.

The move could attract investment in a town with an ageing population, Dr Delia said.

But, alas, he said, the present government had even kept Msida primary school closed for two years.