Labour leader Joseph Muscat today paid tribute to Dom Mintoff by laying a bouquet of flowers at his childhood home in Irish Street, Cospicua and another at the Freedom Monument, the symbol of Mintoff's most important political achievement.

In speaking informally to a group of some 50 people who greeted him at Irish Street, Dr Muscat said that in line with the Mintoff family's wishes, the former prime minister's funeral would include a cortège in Cospicua. The funeral arrangements will be announced in the coming hours. 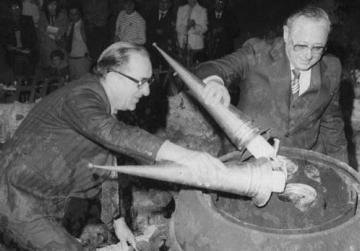 At the Freedom Monument, Dr Muscat said that he was struck by the outpouring of sorrow expressed by the nation after Mr Mintoff's death was announced.

He said that despite controversy and differences of opinion the country recognised that Mr Mintoff was a political giant who had brought about major reforms .

While the Freedom Monument was a monument to Mr Mintoff himself, it was far from being the only one. Mr Mintoff had other living monuments, such as the wealth of social benefits which he had introduced, Dr Muscat said.

The Labour leader also referred to the PL's differences with Mr Mintoff in 1998 and said he was pleaded that over the past four years that chapter was closed.