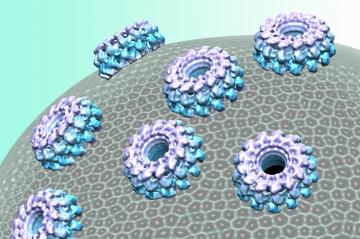 The research revealed clues that might make it possible to block the hole-punching mechanism or introduce it when wanted. Photo: Plos Biology/PA Wire

A carnivorous edible mushroom that lives a double life as part of the woodland landscape and vicious predator is helping scientists find new ways of fighting human disease.

Oyster mushrooms are a common sight growing out of the bark of trees and primarily nourish themselves on decaying wood.

But they are also active predators that trap, paralyse and devour small worms.

Now, new research has shed light on how the mushroom kills its victims before digesting them.

The mechanism involves a protein that punches small holes into cells, leading to their destruction.

A similar trick is used by immune system cells to fend off invaders and cancer, and infectious organisms.

Understanding the action of the oyster mushroom protein, pleurotolysin, could lead to potential applications in medicine and agriculture, including turning off unwanted immune responses and combating infection.

Lead scientist Michelle Dunstone, from Monash University in Melbourne, Australia, said: “I never believed I’d be able to see these proteins in action.

“It’s an amazing mechanism and also amazing that we now have the technology to see these hole-punching proteins at work.

“The next step is to take what we’ve learned from the oyster mushroom proteins and compare them with equivalent proteins across nature.

“We’re particularly interested in this family of proteins in humans, especially perforin, which we believe will behave in the same way.”

State-of-the-art microscopy techniques were used to take molecular snapshots of the mushroom protein latching onto and punching holes in a target cell.

The neat holes either cause the cell to collapse and die directly, or provide a doorway through which other toxins can pass to deliver the coup-de-grace.

The research revealed clues that might make it possible to block the hole-punching mechanism or introduce it when wanted.

Some infectious bugs employ hole-punching. For instance, listeria uses it to escape immune cells and malaria employs it to infect the liver.

Immune system ‘killer’ T-cells attack and destroy cancer cells and cells infected by viruses partly by means of the same method. But sometimes they can turn on healthy cells, leading to autoimmune diseases such as multiple sclerosis (MS).

In agriculture, hole-punching proteins could be introduced to plants and crops to help them fight off pests or reduce the need for pesticides.

Co-author Helen Saibil, from Birkbeck College in London, said: “We still have a lot of work to do before our ideas reach the clinic or industry but seeing how the machinery works is an important step forward.”

The research is reported in the online journal Public Library of Science Biology.