"Before being a person with Down’s syndrome, I am a person," film protagonist Simone Brescianini told a preview in Milan when asked about his condition.

“I cannot delete Down’s syndrome from my life, but my abilities go beyond the condition,” he told a 330-strong audience ahead of his trip to Malta for this year’s Valletta Film Festival.

Mr Brescianini is the protagonist of a short film shot in Malta, which is screening today and on Saturday at St James Cavalier in Valletta.

Called Altrove - Elsewhere, the 18-minute film takes viewers beyond Down’s syndrome. It follows a 24-year-old during a visit to Malta in 2014, as he discusses food, love and everything that is fun.

The film has so far been nominated for eight festivals, including the Valletta Film Festival, New Delhi’s We Care Film Fest and London’s Together Film Festival. It has won Canada’s Bluenose-Ability Film Festival.

Directed by Cesare Cicardini, it has also premiered in London, and will be showing in Oman, Iran, Spain and Serbia, among other countries.

“It feels like a bomb that exploded in my hand… it all started in Christmas of 2013, when Simone, my cousin, asked to come visit me in Malta,” Mauro Melgrati told this newspaper.

“I thought of gifting him a camera to document his trip, but then thought of turning it into a short, since film-making is all that Simone has ever dreamt of.”

Malta worked out as the perfect setting for the short, allowing Mr Brescianini to “go elsewhere”, beyond his hometown of Milan.

“All the noises in the world disappear under the water. I don’t feel different anymore. Even if I have Down’s syndrome, I’m more than that,” he says in the short, after jumping into the blue waters at St Peter’s Pool, Delimara.

Earlier in the short, which comes with subtitles in English, he expresses frustration at the way people stare at him and perceive him. 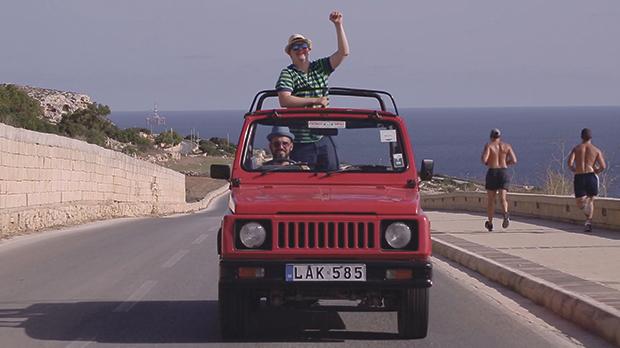 His cousin says Mr Brescianini, who is independent and has a permanent job, is aware that he has Down’s syndrome, and is hurt whenever the condition limits him.

One such example was when he was forbidden admittance on rides at an amusement park some years back, despite having no heart or health conditions.

In fact, the film deals with a topic that many might feel awkward about. For those who do not know a person with Down’s syndrome, the condition might evoke pity, but in the short, the disability comes second to Mr Brescianini.

Mr Melgrati recalls its preview in Milan on May 17, when during a question-and-answer session, a young woman with Down’s syndrome asked the protagonist how he deals with the fact that he has the condition.

“After a silent pause, he said that his sister Rachele had told him at an earlier age that despite the syndrome, he had several other abilities.

“He told the audience: before I am a person with Down’s syndrome, I am a person. He managed to give an honest answer and score some points with his sister at the same time,” his cousin added.

The duo’s next mission is to enrol Mr Brescianini with a film school this September. But before that, there is today’s screening with five other shorts at 11.30am at St James Cavalier in Valletta. The shorts will also be screened on Saturday.

More information is available online  or on the film's Facebook page.