When Aleksandra Illic and her partner were told they didn’t have enough money to keep their toddler in Malta, they thought it absurd.

They had been living in the country for two-and-a-half years when Neda was born. It is the only home their daughter has known.

“We cannot send her to Serbia, that’s not an option,” Ms Illic said.

“She can’t start school there, she barely speaks Serbian. She speaks English. And as well we have nobody to send her to.”

The couple are both employed with a combined income of €22,384, and “substantial” savings in their bank account. They say their daughter has never been deprived of anything.

However, according to Identity Malta, Ms Illic and her partner are at risk of poverty and on that basis will not be allowed to keep their child here.

She can’t start school there, she barely speaks Serbian

Last week, Neda was one of the 22 children sent a letter stating that her residence permit had been refused “following due consideration of the stable and regular income declared by the sponsors, the nature of their employment contracts and other considerations related to the disposable income required to maintain a decent standard of living in Malta.”

Official policy states that to apply for a residence permit for a family member, third country nationals are required to earn €19,000 annually (the average salary in Malta) as well as €3,800 for each dependent. 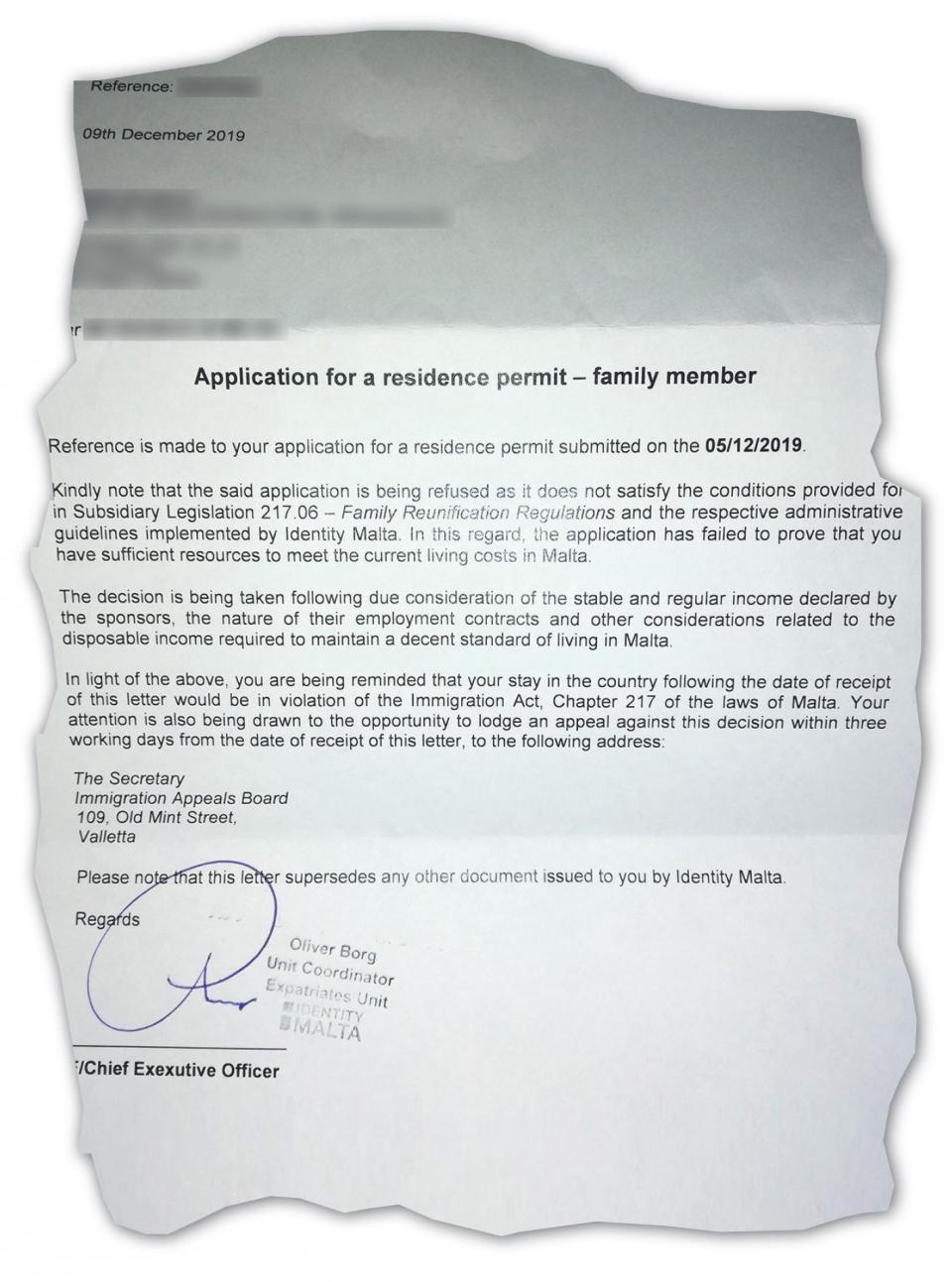 A letter to parents telling them their children’s residency is rejected.

This would mean Ms Illic and her partner are €416 short of the mark annually, since Identity Malta has refused to take their savings into consideration.

Earlier in the this week, Parliamentary Secretary for Citizenship Julia Farrugia defended Identity Malta’s policies regarding family reunification, and insisted the government applied a very lenient approach to the policy.

Rather than assessing the sponsors against the average salary, they were actually assessed against a figure close to the national minimum wage, she explained.

“My heart is with every child in Malta, but the policy is there to protect children from living beneath the poverty line,” she had said.

The residence permits of the 22 children were rejected in their best interest, she added.

Ms Illic, however, believes that the only poverty that she and her family are going to face is when they go back to Serbia.

“If they want to protect Neda from poverty, that is the reason not to send her back, believe it or not we are still doing better here than in Serbia.”

She also can’t understand, how after five years of paying taxes in Malta, just at the point when they will qualify to apply for long-term residence, her child and others from her community are being used to get rid of them.

“What are we supposed to do now? Should we all quit our jobs and go back to Serbia? Is that the point? Are our kids being used as an easy target to get rid of all of us?”

Ms Illic had never doubted that she wanted to make a life for her family in Malta up until now.

“I’m not sure I want to raise the child in an environment where she would be feeling unwanted and rejected, as we as parents feel now.”