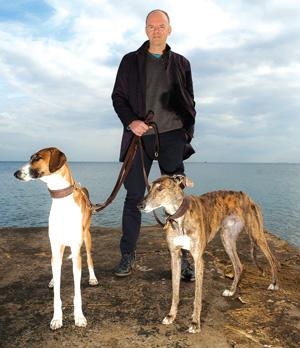 Croatian Zoran Jankovic is a veterinary surgeon and has been based in Malta for the last 14 years. Not surprisingly, he is also an animal lover and is the proud owner of two dogs who are also his exercise buddies.

Zoran has always had a particular liking for sighthounds – so called because they hunt using their speed and sight – and both his dogs fall in this category. The first is a five-year-old former racing greyhound called Breeze – two and a half years ago, Zoran travelled to Britain to rescue Breeze when the latter was about to be put down.

Zoran’s other dog is a one-year-old Azawakh hound called Zephyr. This ancient breed originates from the sub-Saharan area of West Africa and has lived with the Tamasheq-speaking nomads since ancient times. The word “Azawakh” is taken from the valley and the river where these nomadic people live. Thanks to its keen sense of sight, this hound was historically used to hunt gazelle but with the decline in nomadic practices and an increased use of firearms for hunting, its numbers have declined radically. The bloodline of the Azawakh has remained true to its origins over the millennia but is now endangered with less than 2,000 Azawakh hounds outside of Africa.

Living in Sliema, Zoran can be frequently seen running along the promenade or on the flat rocks below and is always accompanied by his dogs

By virtue of their breed, both Breeze and Zephyr are excellent runners, which is just as well as Zoran is a keen athlete. His preferred form of exercise is interval training which involves short bursts of sprinting followed by a normal running routine. Living in Sliema, Zoran can be frequently seen running along the promenade or on the flat rocks below and is always accompanied by his dogs. The exercise provides a sense of release for both dogs and owner. However, Zoran explains that the greyhound is less able to cope with the hot summer months so when temperatures are high, he doesn’t take him out on his run.

Zoran also visits the gym three times a week – however, from a cardiovascular perspective, he says that there is nothing like an outdoor workout.

Zoran is careful about what he eats and follows the Paleolithic diet. This diet reaches into mankind’s past and is based on the hunter-gatherer tradition. Genetically we are almost identical to our Paleolithic ancestors and proponents of this diet believe that our dietary needs have also changed little since then. The Paleolithic diet advocates eating lots of protein and saturated fats of animal origin and to avoid vegetable fats at all costs. Grains and gluten are also avoided since they have an inflammatory effect and are the cause of a number of modern day illnesses.

Zoran started following the Paleolithic diet three years ago and says that he has never felt fitter.

“I have never had more energy and I can’t remember the last time I had as much as a cold since I started following the Paleolithic diet.”

Just like their master, Zoran’s dogs also follow the Paleolithic regime and eat a carnivore diet of raw meat and bones as they would have thousands of years ago. Indeed, it was Zoran’s research into finding the best nutritional options for his dogs that led to the discovery of this revolutionary way of eating.

Although it conceptually challenges many established ideas, the Paleolithic diet highlights the many misconceptions and misinformation that colour modern day thinking and is gathering momentum among those who wish to pursue a healthy lifestyle which is more in tune with what nature intended.

Zoran and his hounds certainly thrive on it and, if nothing else, it is certainly food for thought.

Our relationship with horses goes back thousands of years – horses have helped man expand empires and conquer nations. Yet horses have also fuelled our sporting life.

Often dubbed “the sport of kings,” the origins of polo can be traced back to the time of the Phoenicians. Malta also has a rich history in the sport, which was introduced around 1868 by British Army Officers who were stationed on the island – the Malta Polo Club is not only the oldest in Europe but also the second oldest in the world.

Karl Galea has been president of the Malta Polo Club since 2011.

“Polo is played between October and June on Wednesdays and Saturdays. However, tuition classes by the recently established Polo Academy are held all year round.”

As a keen polo player, Karl is passionate about both his horses and the sport.

I wanted something more challenging than hacking or jumping

“I’ve always loved riding – however, I wanted something more challenging than hacking or jumping. I found this challenge when I first tried polo 13 years ago.”

For Karl, the attraction of polo is the adrenalin rush of a sport that pushes the capabilities of rider and horse to the limit.

To play polo, you need a good eye for the ball, a good seat and a sense of balance. The game is divided into chukkas which last seven minutes each – the aim is for players to hit the ball between goal posts located at either end of the pitch.

Polo ponies come from Argentina. Despite being referred to as ponies they are actually full size horses that have been specifically bred for the game and are agile, responsive and have balanced temperaments. The most common bits are pelhams or gags and the saddles are used with just a thin blanket beneath – this allows maximum contact between rider and horse.

The horses are trained not to be frightened to bump into other horses or to shy away as the mallet is swung over their heads to hit the ball – they are imported already trained from Argentina. Karl’s horses have an average age of 10 years – this means that they are in their prime physically.

Looking after such animals and keeping them in optimum condition is a full-time job in itself. Polo ponies are very expensive to buy and a player will need several if he is to take the game seriously. As a businessman, Karl’s time is precious and much of the mundane care is left to his groom. The daily routine will see them fed and cleaned with 20 minutes of trotting and cantering in the morning followed by a turn out period in the paddock during the afternoon when they are free to graze. A further 45 minutes of training later in the afternoon usually follows – then they are returned to their stables where they are fed and settled for the night.

Just like all athletes, the horses follow a fitness regime designed to keep them in shape. During pre-match preparation, their legs are bandaged and booted to minimise the risk of injury. Also, their manes are hogged and tails tied to avoid entanglement with the polo mallet.

For his part, Karl participates as much as his busy schedule allows and also keeps in shape by playing five-a-side football. Polo is not a game for the faint hearted as a fair bit of jostling can take place. But, as Karl says: “There is nothing quite like being in the saddle during a polo match.”