On the morning of February 1, just hours before the country’s new parliament was to convene following the November election, a military coup abruptly curtailed Myanmar’s decade-long transition to democracy.

Myanmar’s state counsellor Aung San Suu Kyi and other leaders of the National League for Democracy (NLD) were arrested. Troops mobilised across larger cities and the military announced a year-long state of emergency. Protests were mounted all over the country followed by brutal military repression, which according to the latest reports have grown increasingly violent and deadly.

Myanmar’s democratic transition was already very slow and uncertain before the coup. The country has been ruled by a military junta since its independence from the British, in 1948. In 2007, under escalating anti-Government protests and international pressure, the Myanmar military, the so-called Tatmadaw, announced a referendum for a new constitution, which allowed the country to transition to a quasi-civilian government.

In 2015, Myanmar held its first multiparty election, which saw the historic victory of the NLD, led by Aung San Suu Kyi, Myanmar’s democracy icon and international symbol of peaceful resistance. This has however not prevented the Tatmadaw to continue ruling the country, since their vast prerogatives, such as legislative representation, control of key security ministries and power of veto, have been preserved by the national constitution.

The last half-decade has been marked by the difficult coexistence between civilian political institutions and the military, which has complicated any substantial effort to promote political reforms. This is witnessed, among other things, by Aung San Suu Kyi’s inability to deal with human rights issues. Her silence and inaction towards human rights abuses of the Muslim ethnic minority, the Rohingya, and her defence of the country against allegations of genocide at the International Court of Justice have severely hampered the former Nobel Peace Prize winner’s international credibility and reputation. 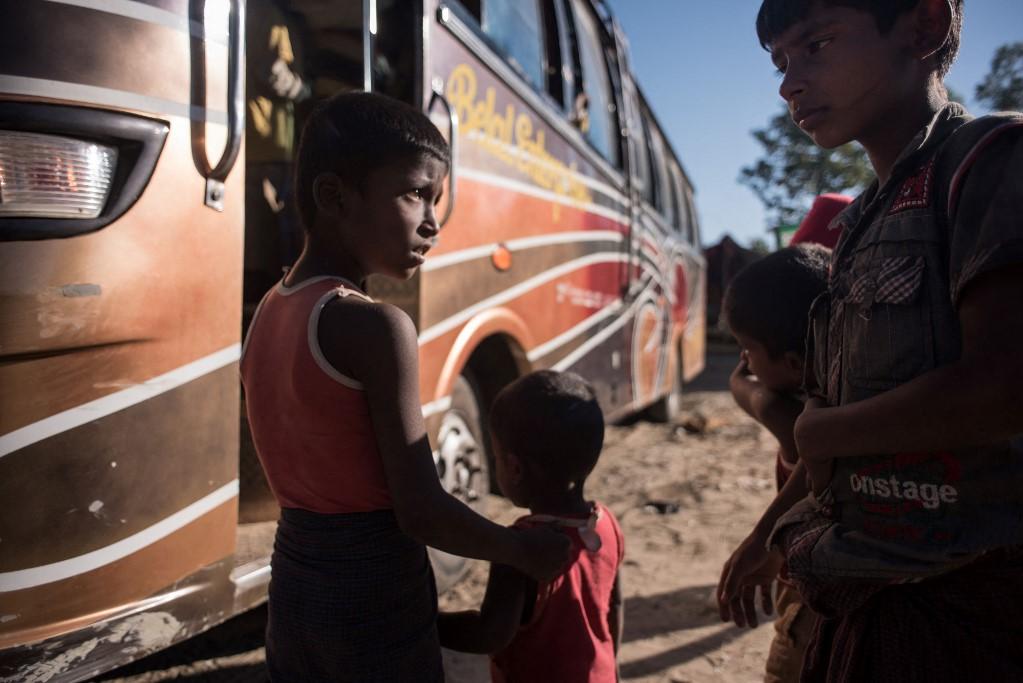 Rohingya children board a bus before departing to a refugee camp in Bangladesh after arriving from Myanmar in 2017. Photo: AFP

The coup is however not only a witness to the false promise of Myanmar’s democratic transition under shared civil-military rule, but is also a reflection of the rising complexity and fluidity of the Southeast Asian region.

First, the coup casts a shadow not only over the future of democracy in Myanmar. Democracy is in retreat in a number of Southeast Asian countries, including the Philippines, Indonesia, Thailand and Cambodia. On top of this, amid the COVID-19 crisis, security forces including the police and the military have expanded their powers. Task forces with strong military representation have been established in Thailand and Malaysia. According to Murray Hiebert, a senior Associate of the Southeast Asian programme at the Center for Strategic and International Studies, in Washington D.C., efforts to control the virus have given authoritarian rulers the perfect cover to oppress critical voices and opponents. Growing concerns are therefore mounting about the erosion of democratic institutions especially because the military has a long history of political intervention in the region.

Second, the coup is a powerful reminder of the fragilities and inherent contradictions of the regional bloc, the Association of Southeast Asian Nations (ASEAN). While the Western international community has loudly condemned the coup, ASEAN members are highly divided on how to approach the Myanmar issue. Cambodia, Vietnam, and Thailand are referring to the coup as an “internal matter” while Singapore and Malaysia are raising strong critical statements and Indonesia is stepping up pressure to respect the will of the people and the observance of the ASEAN Charter. 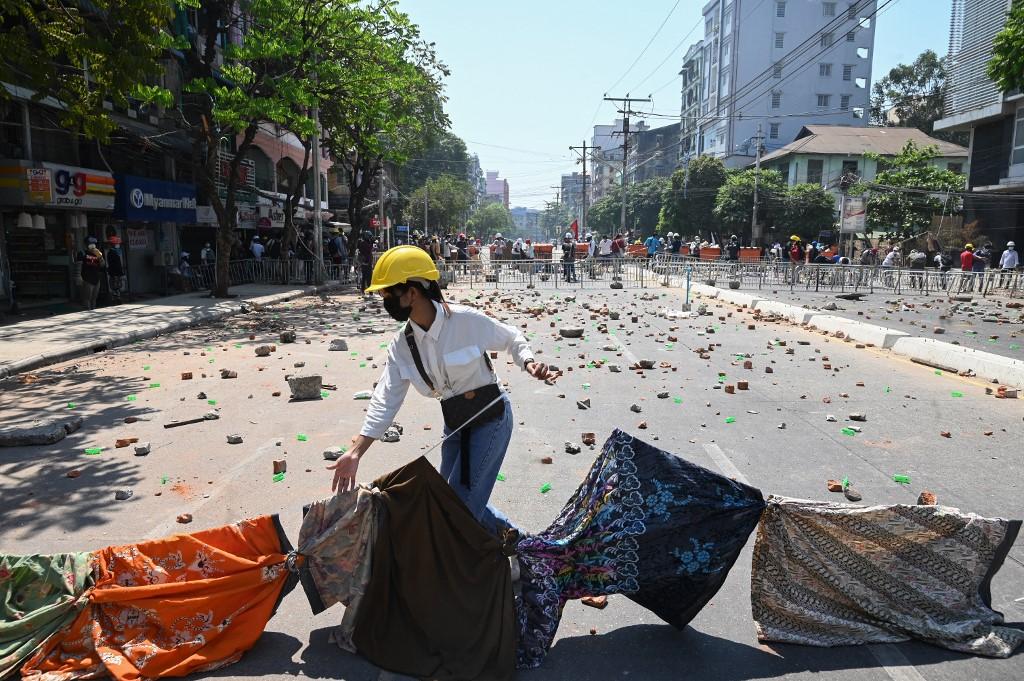 A woman hangs a collection of longyi, a traditional clothing widely worn in Myanmar, across a road during a demonstration in Yangon on March 8. Photo: AFP

On March 2, the virtual talks between the nine ASEAN Foreign Ministers and their counterpart in Myanmar have not produced much substance. Fully in line with all past ASEAN statements on those issues reflecting ASEAN members’ divergent concerns and interests, the final statement released by the current ASEAN Chair, Brunei, has only urged “all parties” to refrain from instigating violence and “to seek a peaceful solution, through constructive dialogue. This loose, less divisive language displays ASEAN’s inherent difficulty in reconciling the democratic principles enshrined in the ASEAN Charter and in the ASEAN Declaration of Human Rights, with ASEAN’s traditional provisions of non-interference and respect for national sovereignty. The Myanmar coup therefore risks entailing broader repercussions and severely undermining ASEAN aspirations to occupy a position of diplomatic centrality in the Asian regional security architecture.

Third, the coup fuels additional geopolitical competition between the US and China.  Under the Trump administration, Southeast Asia experienced years of neglect. Former President Trump had shown disdain for multilateral mechanisms clearly stating his preference for bilateral trade agreements. Furthermore, the replacement of Obama’s Asia-Pacific agenda with the Indo-Pacific focus has created concerns that Southeast Asia is being marginalised by US foreign policy. The decline of the Pax America has been contrasted with China’s growing activism.

In Southeast Asia, China has financed a plethora of projects under the Belt and Road Initiative, including oil and gas pipelines, the Kyaukphyu Special Economic Zone (SEZ) and a deep-sea port, in Myanmar, which are ongoing even during the current COVID-19 situation.  The pandemic has also offered China the opportunity to expand its soft power by sending tons of medical supplies to Laos, Cambodia, Myanmar, the Philippines, Indonesia and the ASEAN Secretariat. 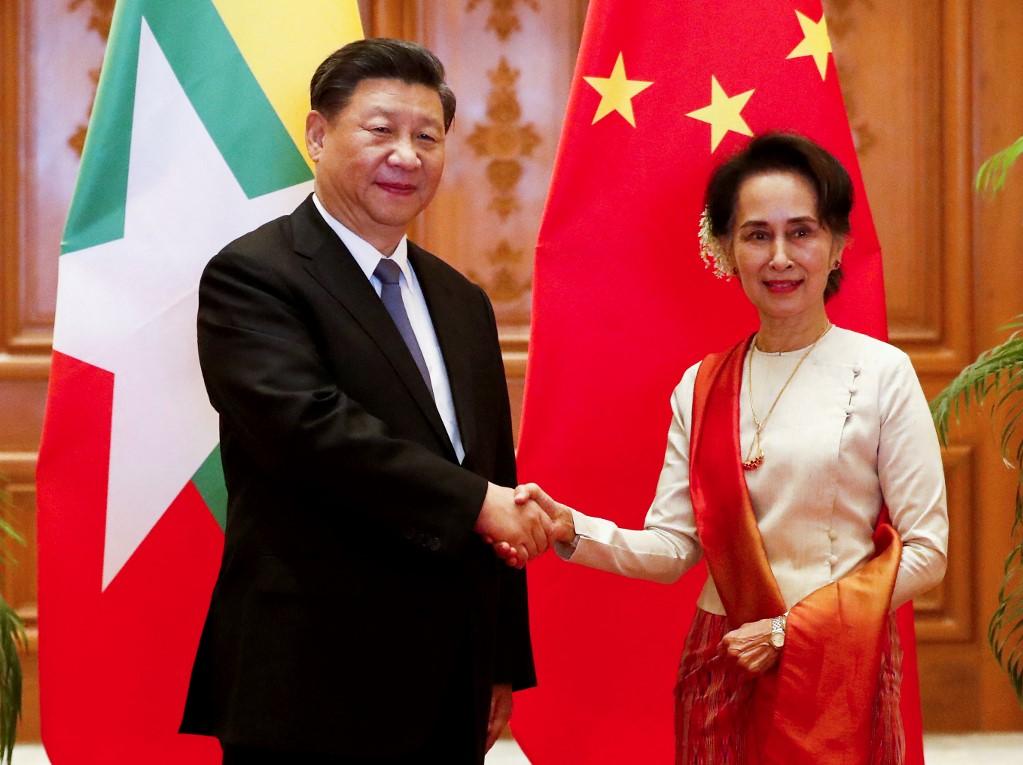 Yet, according to a survey published in February 2021 by the prestigious Institute of Southeast Asian Studies (ISEAS) in Singapore, 88.6% of respondents in ten Southeast Asian states have revealed growing anxiety over Beijing’s strategic clout in the region, while 55,4% have expressed their confidence in the US as a strategic partner and provider of regional security.  This positive view towards the US seems to result from the hope that the Biden administration will elevate American engagement within the region.

The coup in Myanmar confronts the newly established Biden administration with a huge dilemma, though. If the US wants to revitalise its role in the region by promoting a value-based agenda, a wait-and-see approach is not an option in Myanmar. However, a punitive reaction, including targeted sanctions, might not be the best way forward to deal with the Myanmar conundrum.

Myanmar’s long history of military rule has shown that sanctions have not produced the desired results. At the same time, a punitive approach, which stands in sharp contrast with China’s call to respect “Myanmar’s internal affairs”, as reiterated during the United Nations General Assembly, last February 26, might work to China’s advantage further consolidating its influence in the Southeast Asian region.

Angela Pennisi di Floristella is a senior lecturer at the Department of International Relations within the University of Malta.