First of all, I think it is useful to dispel the myths on which the legend of Napoleon Bonaparte in Malta is based.

Victorious in Italy in 1797, the young general who treated with the pope and the emperor of Austria without taking into account the orders of the French government, was absolutely not the powerful Napoleon, emperor of the French. 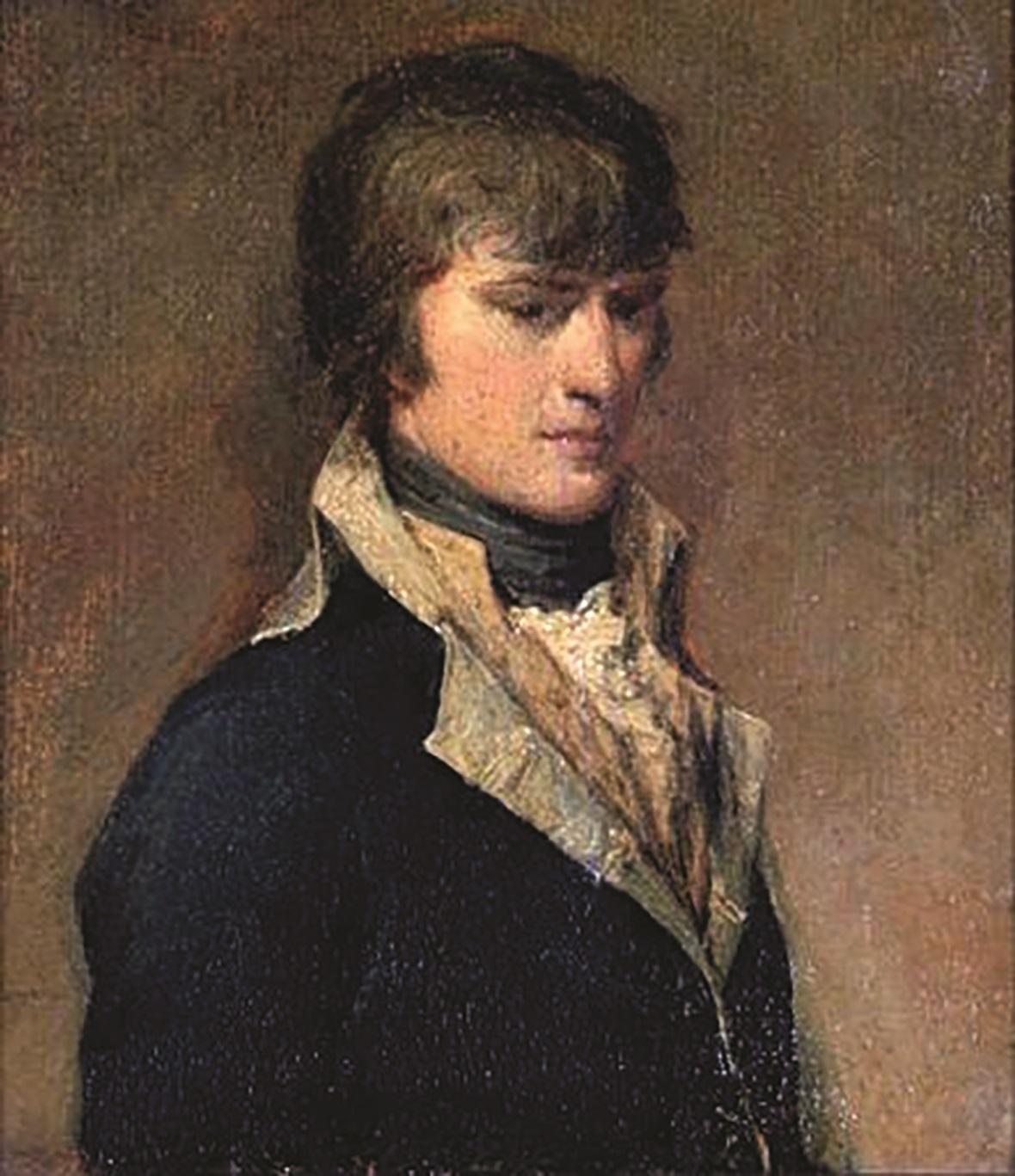 Upon his return from Italy, he was not well received by the five members of the executive directorate. While he was hoping to become one of them, he was underemployed. The Republicans defied this general adored by his soldiers and who did not hide his ambition. Humiliated by his seclusion, he could be a danger to the republic.

So, a decision was taken to distance him as far as possible. Then, Charles Maurice de Talleyrand-Périgord, a former president of the Council of Ministers of France, revived a proposal which originated in the reign of Louis XV: seizing Egypt to take back the part of India that the English had snatched from France in 1763.

But the directorate suffered from a chronic shortage of funds. So, having provoked a revolution in Bern, Switzerland, the huge treasure of the city was acquired and the French government was able to assemble the triple squadron destined for the Orient. 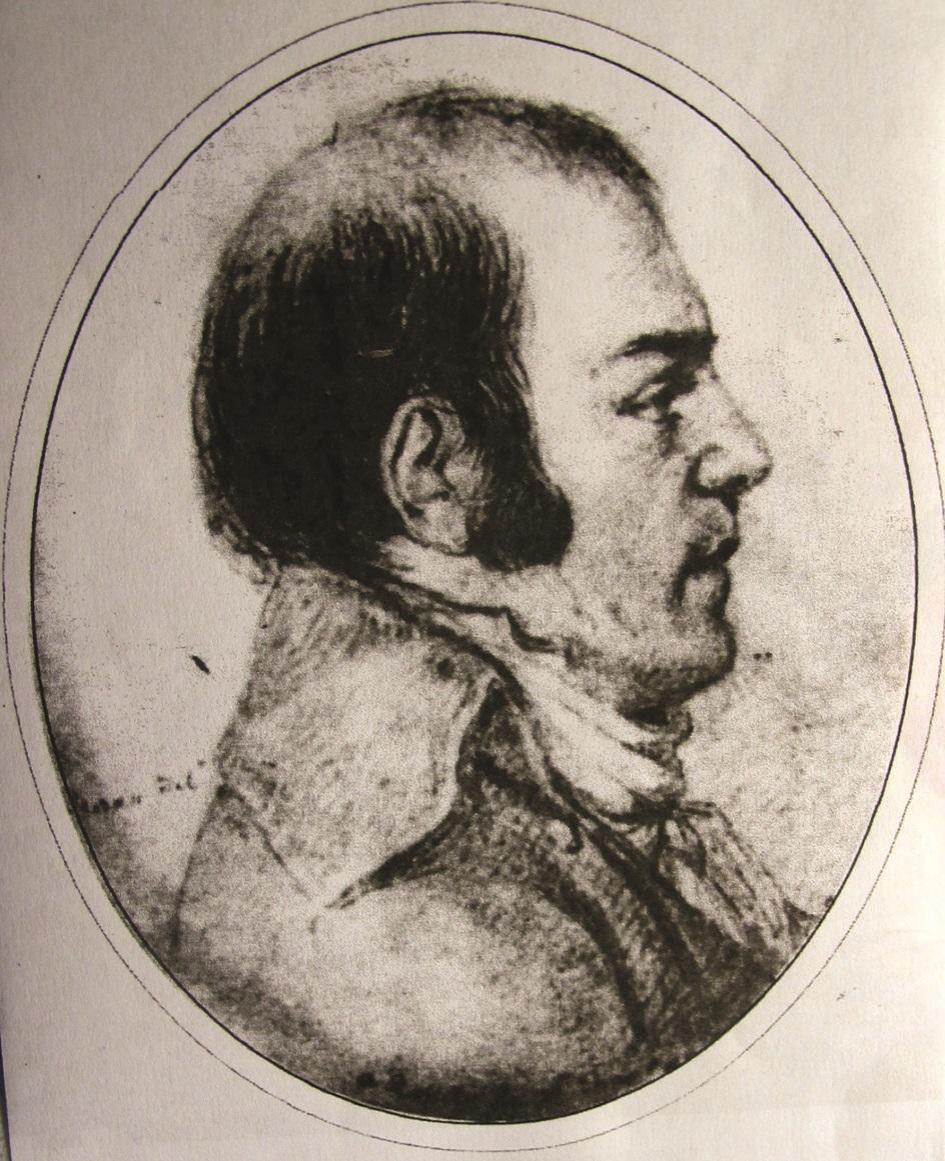 A portrait of Jean-Baptiste Poussielgue found at the Wignacourt Museum.

Moreover, funds were also required to pay the troops before Egypt’s resources could provide for them. It was, therefore, decided that, on the way, he would seize Malta in order to pull the rug out from under the Russians’ feet, to make Malta and its dependencies a French department, to nationalise the monastic orders and churches served by them and to ensure the functioning of the army by means of their property and of the treasury of the Order. Yet, he had to protect the churches served by diocesan priests who held their allegiance solely to the bishop.

Bonaparte landed in Malta in the afternoon of June 12, 1798 and left the island on June 19. During his six-day stay he signed an impressive number of orders which brought Malta into conformity with the French constitution of 1795. But it is absolutely impossible that in six days the French could have understood the complex situation of Malta and undertaken all that was necessary to reform society, justice, administration and the ecclesiastical sphere.

In fact, for more than one year, several Maltese served either the directorate or Bonaparte. As early as 1797, the five directors were mainly informed by Charles Zammit, a Maltese friend of Prince Charles of Hesse-Rheinfels, who became a fanatic Jacobin under the name of Citizen Hesse. 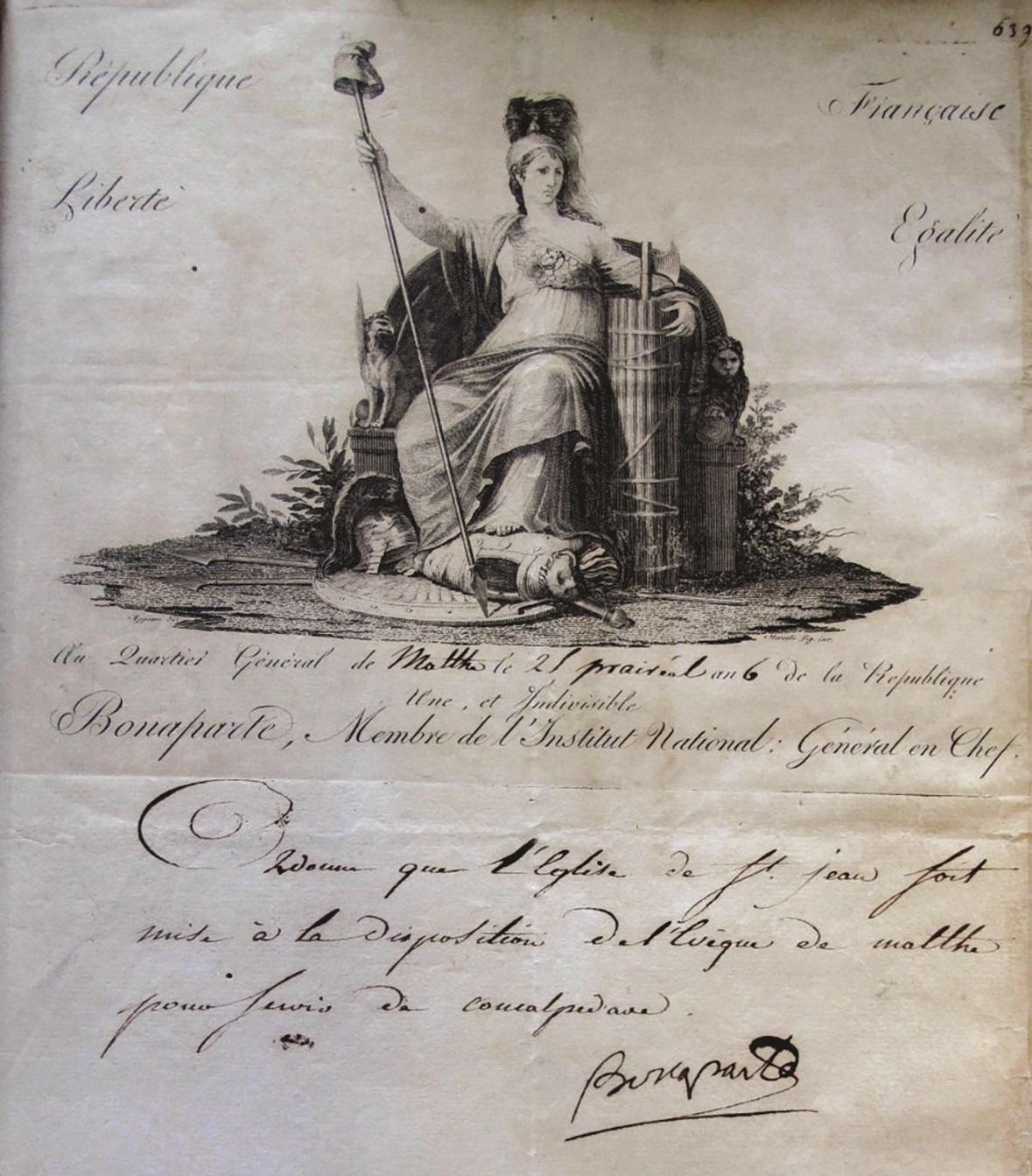 The order of ‘21 Prairial An VI’ (June 9, 1798), signed by Bonaparte, which placed the conventual church of St John at the disposal of the bishop of Malta as concalpedare.

Zammit corresponded secretly with Malta and published in Paris a memoir on the political and military situation of the Order of Knights in Malta [Mémoire sur la situation politique et militaire de l’Ordre des chevaliers dans l’île de Malte] in which he drew up a plan for the invasion of the country at St Thomas Bay and Marsaxlokk. Bonaparte executed this to the letter.

The directorate also had a local informant: the French consul Caruson. Still as early as 1797, Bonaparte was joined in Trieste by the Maltese corsair Barbara who gave him all the information on the island’s situation. For his part, the general sent to Malta Jean-Baptiste Poussielgue, whose family belonged to the prominent society of Valletta.

How St John's became a 'co-cathedral'

Thus, all the documents signed so quickly by Bonaparte had been prepared by the directorate in Paris and left for application to Michel Régnaud, a lawyer and a deputy elected by the town of Saint-Jean d’Angély. He was also close to Bonaparte, having been the administrator of the hospitals of the Italian army.

All these acts, except one, concerned St John’s conventual church. When Sir Hannibal Scicluna published in 1979 the legislative acts adopted by the French, the latter document did not appear for the simple reason that it was not comprehensible.

The order of ‘21 Prairial an VI’ (June 9, 1798) placed the conventual church at the disposal of the bishop of Malta as concalpedare. But this word does not exist in French. For two centuries, without having any legal proof, St John’s was referred to as a co-cathedral which might have been a source of political friction.

In the early 1990s, I found the copy, translated into Italian, of the act of Bonaparte at the Cathedral Archives (Religio Hieros. S. Ioannis, XLIII, Ms 136, p. 100). In effect, St John’s was mentioned as a concattedrale. Thus, the notion of concathédrale, unknown by French law, was read concalpedare by the secretary because in the 18th century ‘th’ was written ‘tɧ’ that became ‘lp’ under his pen. 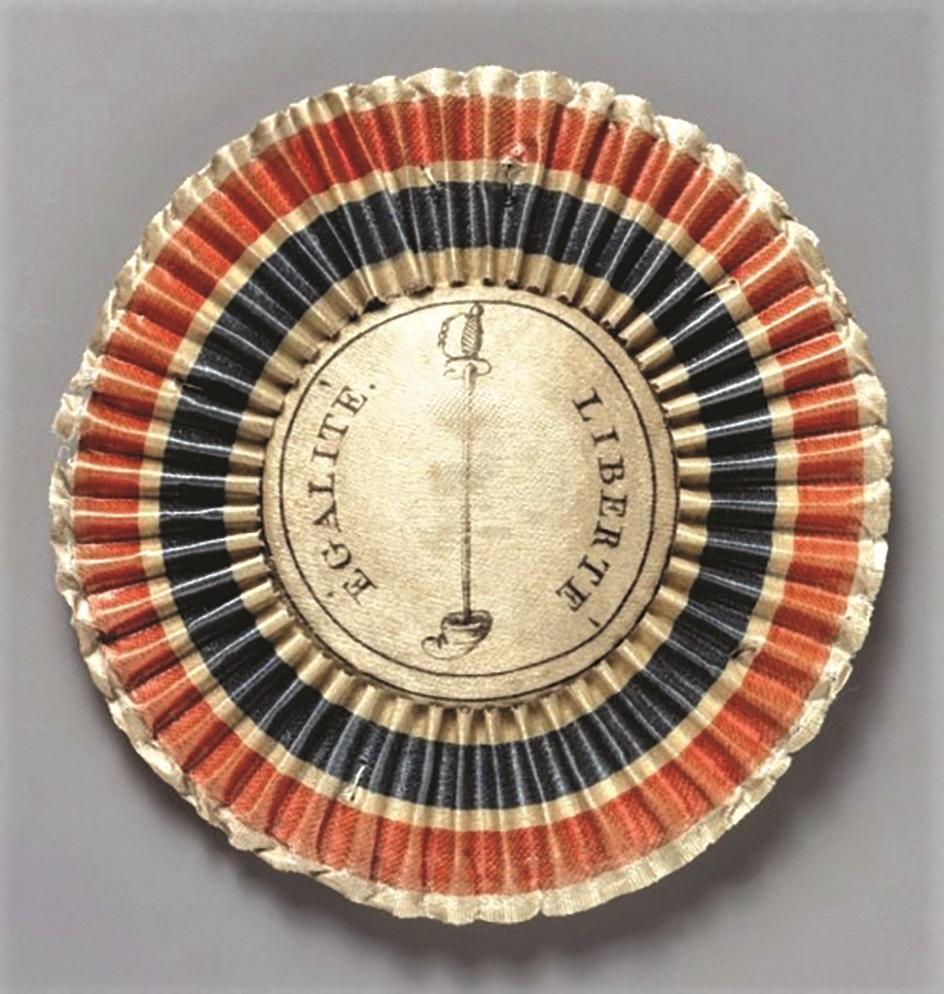 A tricoloured badge of the French Revolution era

But according to French constitutional law since 1790 (later confirmed by the Concordat of 1801), the geographical jurisdiction of a bishopric was to be the same as the department’s one. The bishop’s cathedral could, therefore, only be the main church of the chief town. It follows that since Valletta became the capital of the department of Malta and Gozo, the cathedral could only be in Valletta.

Thanks to the late Dun Ġwann and the courtesy of Mgr Doublet, I had proof that this was Bonaparte’s intention. In 1800, Bishop Labini wrote (in Latin) to Pope Pius VII to tell him about the ecclesiastical events in Malta after the arrival of the French as well as about his relations with Bonaparte.

Among other things, he wrote: “This general in chief wanted and ordered that the appellation and dignity of cathedral be given in the future to St John’s church but my efforts and requests only resulted in obtaining that the old cathedral become and be called concathedral [ut prisca cathedralis et diceretur et esset concathedralis]”.

So, St John’s had to be the cathedral and St Peter and Paul’s a co-cathedral. But it seems that Bonaparte did not want to aggravate the situation and the two churches were thus called ‘co-cathedral’. The draft prepared to make St John’s conventual church the new cathedral was then hastily corrected with the word concathédrale, totally unknown in French, which explains the secretary’s mistake.

Bonaparte, who knew that Nelson was after him, pressed by time, signed all papers that were submitted to him without checking them, hence the misunderstanding that lasted two centuries.

Indeed, by his order of ‘21 Prairial an VI’, Bonaparte had brought canon law into harmony with republican law. The new cathedral was in the main town of the department but the old one, located in the former capital of Malta, did not lose its dignity. Since the bishop had only one see, the two churches became co-cathedrals. But there was a major difference between them: St Peter and Paul’s of Mdina belonged to the diocesan Church while St John’s of Valletta belonged to the government and was provided to the bishop.

According to international law, Malta’s sovereignty was legally conferred on England by the Treaty of Paris (1814) and confirmed by the Congress of Vienna (1815). Then, the British government inherited the prerogatives of the Order of Malta and the French Republic. 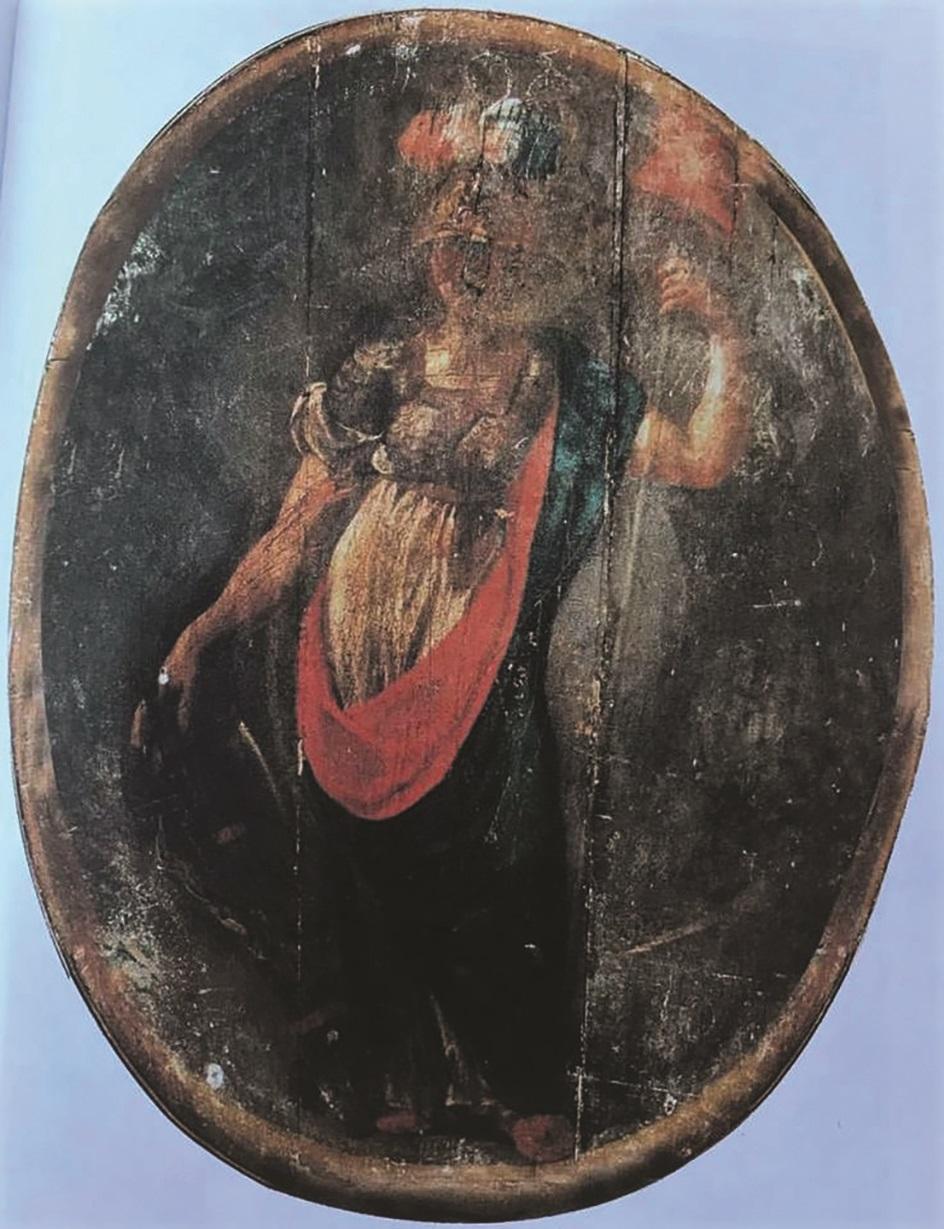 A visual representation of La République previously located at the main entrance of the Mdina cathedral and now found at the Cathedral Museum.

Now that St John’s belonged to the Crown, the English suggested that it might be turned into an Anglican cathedral. This caused a huge commotion among the Church of Malta and the Holy See. The benevolence of queen Adelaide, widow of William IV, calmed things down.

Thanks to her, St Paul’s Anglican pro-cathedral was built between 1839 and 1844 on the site of the Auberge of Germany. However, contrary to what the Church of Malta thought, for England, St Peter and Paul’s and St John’s were equal in dignity as evidenced by the legend of a 1949 photo which referred to Princess Elizabeth’s visit to Mdina’s ‘co-cathedral’.

In the 1970s, the conflict reappeared, this time between the Maltese government and the Church. As St John’s belonged by devolution to the Maltese state, it was held by some that Caravaggio’s masterpiece should be transferred to the Mdina museum.

One of the arguments that prevented this from happening was that the only legal act on which it could be based did not provide sufficient proof because it was then incomprehensible.

Thus, the error of an 18th-century copyist avoided the Beheading of St John from being dislodged from the site for which it had been commissioned.

Alain Blondy is a French historian