A structure comprising a fort, a lighthouse and a monastery with a chapel dominated the islet of Filfla some 200 years ago, according to a very rare and previously unknown map of Malta which recently surfaced in a library in Germany.

The map was discovered by German scholar Michael Ritter, who is a specialist in the cartographers of Augsburg and who brought it to the attention of the Malta Map Society.

The map, says the society’s secretary Joseph Schirò, is extremely rare and to date its existence was unknown even to society president Albert Ganado, who has been studying Maltese maps for 60 years. 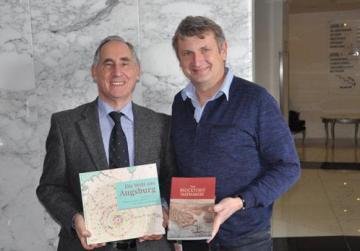 It is the only one known to exist and is found in the Bavarian State Library in Munich.

The copper-engraved hand-coloured map depicts the islands of Malta, Gozo, Comino, Cominotto and Filfla and was published in 1798, the year when Napoleon occupied Malta on June 17.

In fact, the event is mentioned in the engraved text on the upper right-hand corner of the map, where further information is given about the geographical location of Malta and the population of the time – 150,000 inhabitants. It also notes that the main diet of the Maltese was fish.

The map is signed by Johann Michael Probst the Younger (1757-1809) and was engraved by his son Johann Conrad Probst. The Probst family was one of the leaders in the engraving trade in Augsburg, Germany. Mr Schirò points out that the inset map of Filfla is particularly interesting as it depicts a construction on the islet which included a fort, a monastery with a chapel and a lighthouse. Filfla was larger at the time.

“We know that the chapel was dedicated to Our Lady of the Assumption and is said to have been built in 1343. The chapel was deconsecrated in 1575 by Mgr Dusina and everything inside it was moved to the Pope St Leo chapel, close to the Bubaqra cemetery.

“The building was allegedly destroyed in an earthquake in 1856, with all traces of the foundations disappearing in the bombings that ensued during the British period when the island of Filfla was used for heavy bombing target practice.”

Other interesting features in the map include the Wignacourt aqueduct, which stretched over 15 kilometres and transported a constant supply of drinking water from Rabat to Valletta. The aqueduct mostly ran underground but was carried on a series of stone arches where depressions were encountered along the route. Both features are marked on the map.

Also of note is the Munxar reef, which lies between Delimara and Marscascala.

In those times, Mr Schirò says, it was still an island before it disappeared into the sea to become a reef.

One can also see that beyond Mosta and Naxxar, the north of the island was practically uninhabited.

The Malta Map Society is a young, active society which was established in 2010 with the aim of supporting, encouraging and disseminating the study and preservation of maps, with a particular emphasis on maps of Malta.

Since it always tries to obtain further information about maps of Malta, the Society keeps a healthy collaboration with all the other cartographic societies in the world and it is thanks to this that the hitherto unknown Malta map was discovered.