On the night of August 15, 1769, the feast of the Asumption of Our Lady, 250 years ago today, in the coastal town of Ajaccio on the French island of Corsica, Letizia Ramolino, wife of lawyer Carlo Buonaparte, bore a child, calling him Napoleone, after his father’s uncle, who had died two years before. Napoleone was a popular forename in the Buonaparte family, which had descended two centuries before from minor gentry of the little town of Sarzana on the borders of Tuscany and Liguria.

As a soldier, Napoleon Bonaparte, as he became known in France, was aware of the importance of the Mediterranean in European maritime commerce to the east. That is when he first thought of little Malta enjoying a strategic commanding post that could serve and control French naval interests. On his way to Egypt in June 1798, Bonaparte kept his promise. The takeover, with some 37,000 Maltese in sympathy with the enlightened French Republic, who mostly lived in the commercial harbour area, offered little resistance.

General Bonaparte would one day boast an empire he would create with a mission to civilise other nations on the Continent and beyond. In 1798 Malta, he thought he could test for the very first time his ideas in creating a modern society not through military orders but with a thorough social reform that would convert a small, medieval society into a modern state.

During six days in Valletta, issuing some 160 administrative orders, he provided the country with a political and social Constitution based on equality by abolishing slavery and suppressing nobility. His edicts separated Church and state affairs and curtailed ecclesiastic material privileges. He organised public order, government administration, justice, finances, as well as free health and public instruction.

Obviously he was attempting to achieve a great deal in a very short time – which explains the failure of the plan – but in retrospection one might view his actions in Malta as a blueprint for his countless future reforms in France and Europe on superior scales.

The versions of evidence that undoubtedly left a mark on the Maltese collective memory regarding Bonaparte were those written by Maltese and British authors. Maltese readers, teachers, historians and the media, consciously or unconsciously, were drawn to those accounts. Emotional, religiously tinted, patriotic stories are always more popular; very few indeed, if any, suspect the possibility of manipulated or circumvented narration passing through generations.

Bonaparte’s arrival on June 12 near Customs House in Valletta (no tourist plaque remembers this) was described by some writers as one where Maltese people crowded the pavements to witness the spectacle “without signs of enthusiasm or rejoicing”. This contrasts harshly with a Sicilian account by Giuseppe Capodieci which was taken verbatim from banished knights arriving in Sicily from Malta immediately after the event, stating that Bonaparte was welcomed with shouts of Liberatore and Eroe. Several authors often ignored pertinent sources.

French diaries on the Maltese 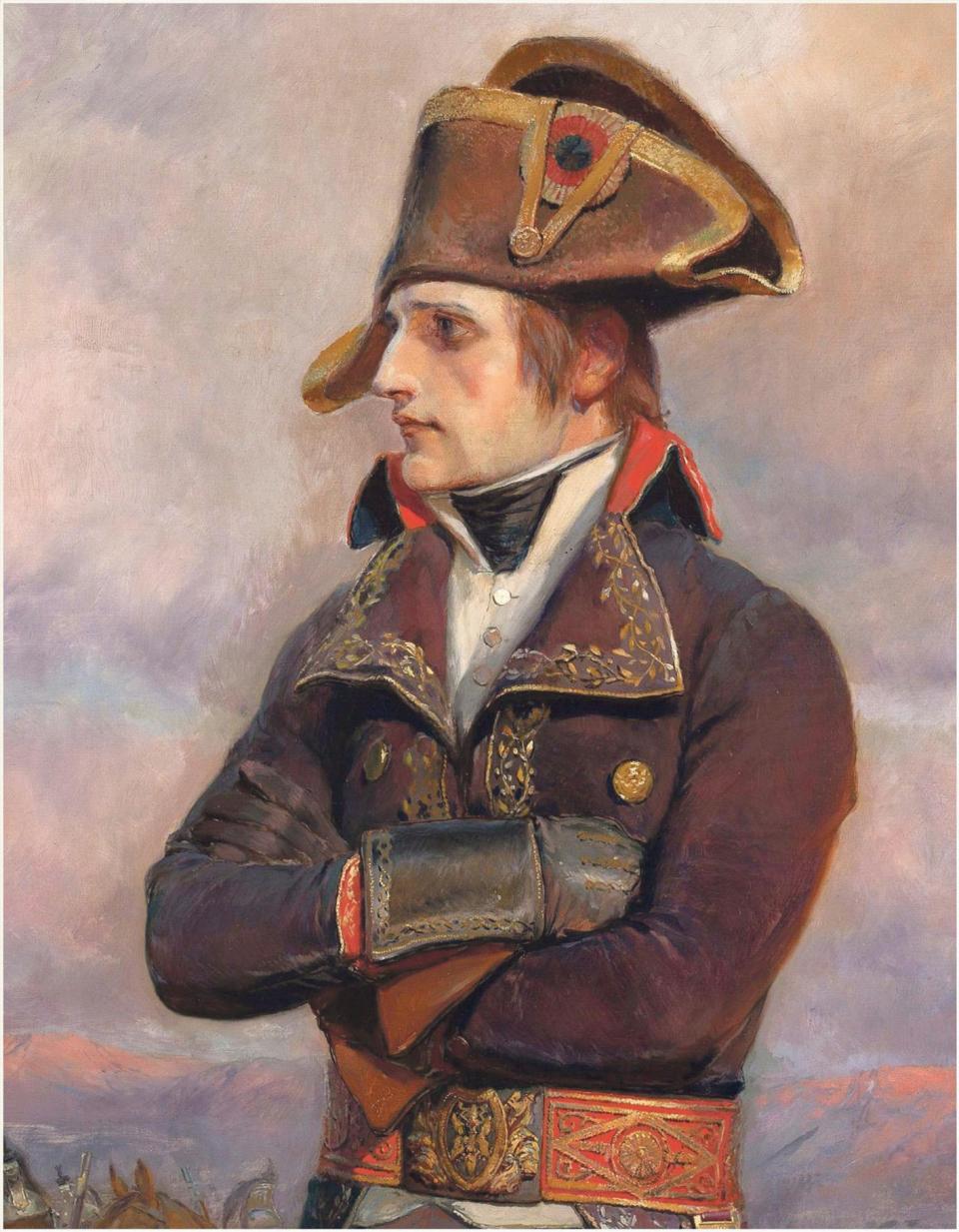 Two rarely-consulted diaries left by eye-witnesses include one by noble ecclesiastic-turned-military French Captain Joseph-Marie Moiret of the 75th Demi-Brigade, known as l’invincible. His descendants finally laid hands on it in 1983.

As Captain Moiret lands on the outskirts of Malta in 1798 he describes what be encounters: “The women were all covered in black; they appeared mournful, almost defiant and disdainful, dark, melancholic and wild. They did not meet our eyes; it made us feel like some evil eye was trailing us. Houses were closed and roads deserted, expressing gloom and desolation.”

Moiret thought this was the most frightful place on earth. A few days later, however, he discovers how wrong he was when he visited Alexandria. “A Maltese woman could easily pass as Venus, compared to women here!” he concluded.

Another Frenchman, François Bernoyer, head tailor of the army and Italian campaign veteran, wrote letters to Marie-Catherine Boutin, his fresh bride left behind in Avignon. In 1915 his diary was passed to    the family of historian Christian Tortel, who co-authored Bernoyer’s version of the campaign, including Malta.

In 1798 Malta, he thought he could test his ideas in creating a modern society not through military orders but with a thorough social reform

“The Maltese are sailors, at ease with the sea, warm and friendly,” he admits, “but more chauvinistic than patriotic. Bonaparte is a genius, admired and feared by his men.” Bernoyer feels proud when he discovers, on June 16, how Bonaparte declared all the inhabitants of the island to be French citizens and form part of the Republic.

He describes the landscape: “Outside the city walls, one could see sporadic miserable peasant habitations amid dry, arid land, badly cultivated. One could not see the beautiful villas usually found outside European cities; only convents, numerous chapels and wayside crosses at every corner. It gives you a clear idea of the people’s faith.”

Bernoyer bestows praise on Valletta: “Full of beautiful palaces with terraces and stepped roads, allowing horses to move around without hindrance. The new government formed a legion of Maltese soldiers. To crown their public rejoicing and to express their satisfaction at their union with France, the Maltese National Guard, a force of nine hundred men chosen from wealthy citizens, traders and those interested in public order, organised a grand banquet inviting all the French officers and generals.” 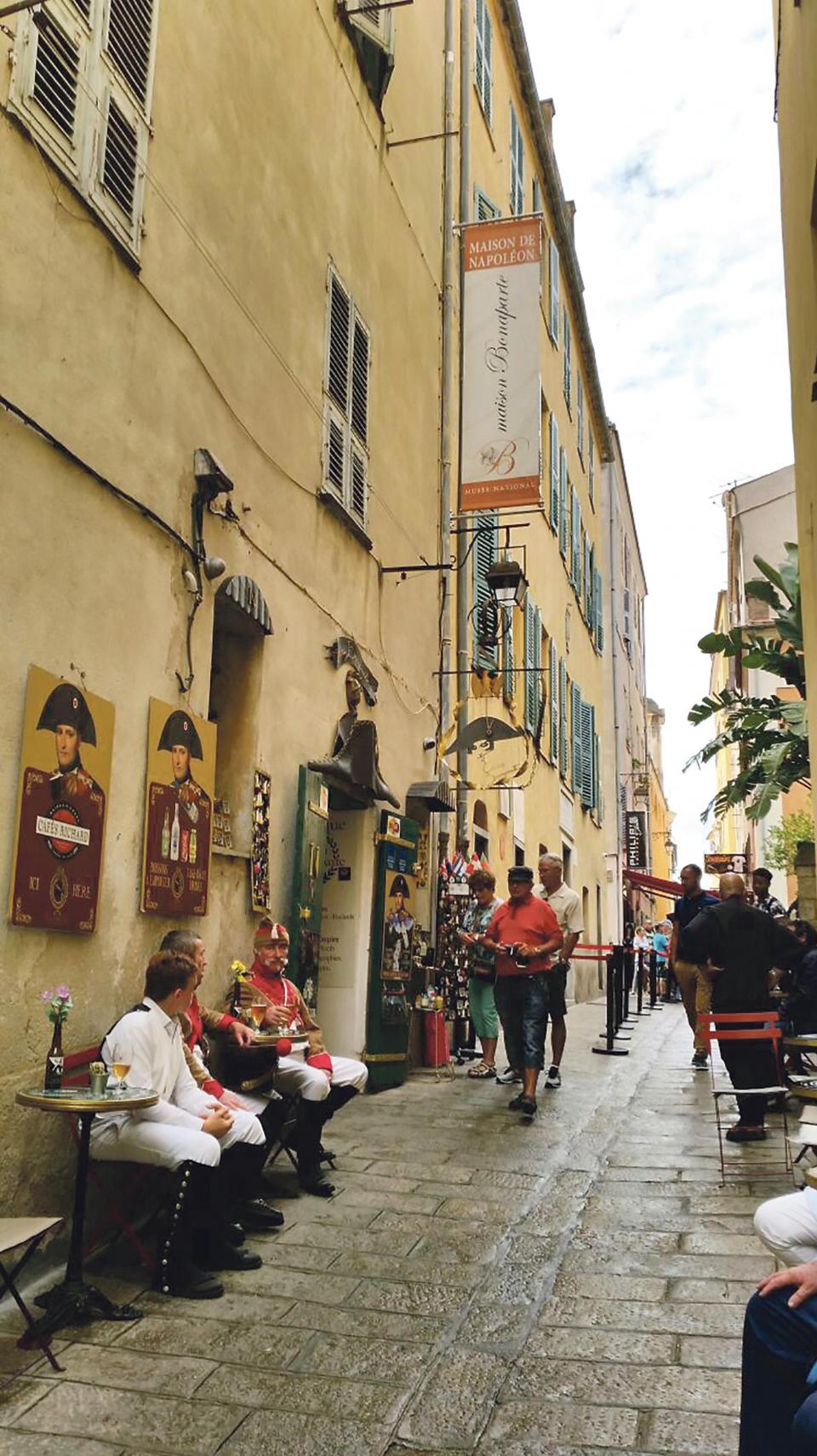 Rue St Charles in Ajaccio, capital of Corsica, showing the house where Napoleon Bonaparte was born on August 15, 1769, 250 years ago. Next door is Maison Bonaparte, a national museum, and a popular outlet selling Napoleonic paraphernalia and souvenirs.

In two years’ time we mark 200 years since Napoleon’s passing away. Upon his death, friends and foes generated a universal cult in his memory.

Alessandro Manzoni in Italy captivated the myth with Il Cinque Maggio, marking his death on May 5, 1821, inspiring Vincenzo Caruana with Fuq il-Mewt ta’ Bonaparti. In Russia, Alexander Pushkin, in his Eugene Onegin, confesses: “We all possess Napoleon’s features.” Beethoven had already bestowed his Eroica to the Emperor, changing his dedi­cation later to preserve his popularity in Vienna. Immersed in orchestrated anti-French propaganda, Britain was not spared from the irresistible power of Napoleon’s fascination. British Whig politicians argued that Napoleon was forced to become “master of the Continent by Allied aggression”.

Napoleon’s rise had struck a chord with English romantic poets such as William Wordsworth, Samuel Taylor Coleridge and Lord Byron, the last two quite familiar with Malta. Wordsworth, in The Convention of Cintra, saw the Peninsular War as a struggle of good against evil, figuring Napoleon as the ‘evildoer’. The poet, according to Simon Bainbridge, “dehumanises and de-historicises Napoleon, he demonises and Satanises him”.

Coleridge, who arrived in Malta in 1804 to libe­rate himself from opium dependency, mus­ed that Napoleon had “those daring and dazzling qualities that too often make a tyrant pass for a hero”, helping Commissioner Alexander Ball to “change the minds of the people” with his regular contributions to the Maltese Gazette.

While Britain’s Opposition leader, George Ponsonby, in 1810 had described Napoleon as “the greatest man that has ever appeared on the face of the earth”, Byron, the third of the Laker poets, who visited Malta in 1809, deemed the French Emperor “heroic and mock-heroic, sublime and ridiculous”, formulations the poet also used for himself.

Byron’s disappointment with his hero came about only when Napoleon failed to make a dramatic exit and instead abdicated his throne in 1815. Aware of Napoleon’s posterity, he chides his charismatic hero: “If thou hadst died as honour dies, some new Napoleon might arise, to shame the world again.”

Dr Charles Xuereb is author of France in the Maltese Collective Memory, Perceptions, Pers­pectives, Identities after Bonaparte in British Malta (Malta University Press, 2014, out of print).