Artist Matthew Attard is currently holding a solo exhibition, In Human, at No.Me Studio, Valletta. It revolves around three sculptures narrating bodies – narrating the story of faceless and nameless bodies, indefinitely suspended together with those whose story is not known. 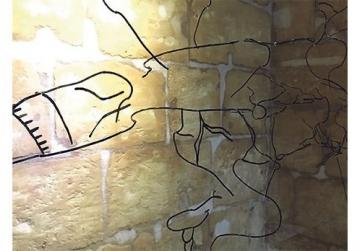 The theme of the works addresses bodies that could be anybody or nobody, drifted ashore by the sea, bodies in a square – some are covered, while others uncovered, decomposed or fully intact.

Bodies evoking death... but so might our morality, conscience, solidarity and sensibility. Bodies which may remind of a daily fruition, which consequently become habits, wasting human qualities – ours. When amassed next to others, clumped, lesioned and integrate, they seem to lose their identity becoming a phenomenon documented in a place, in an article, in a book, as a sculpture.

Works address bodies that could be anybody, nobody

Attard presents bodies which we listen to, fear, read about and wait for, but which we do not recognise. They dissipate quickly in between events, attacks, shipwrecks and calls of distress. Through these works, they become suspended in air and dissected slowly in an empirical method, which suspension forces upon the viewer a somewhat technical research.

The viewer has to primarily re-assess the function of drawing through what appears as casual and abstract wire lines, before finding him/herself in front of a body... in front of an image of death narrating itself without a story but which tells the story of all nameless bodies.

In Human runs at No.Me, Republic Street, Valletta, until October.