Tributes have been paid to Neil Armstrong, the first man to walk on the Moon, who has died at the age of 82.

He famously uttered the quote moments after setting foot on the lunar surface: "That's one small step for man, one giant leap for mankind."

Astronomer Sir Patrick Moore said: "As the first man on the Moon, he broke all records. I knew him well. He was a man who had all the courage in the world." 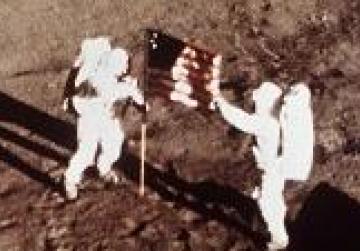 Apollo 11 astronauts Neil Armstrong and Edwin 'Buzz' Aldrin, the first men to land on the Moon, plant the US flag on the lunar surface

Mike Cruise, professor of astrophysics and space research at the University of Birmingham, said: "The people at the front of the race always have to tread on new ground. He led the whole world into a space era of greater proportion than has been achieved by satellites. You wonder when his first steps will be followed up. It must have been very awe-inspiring to step on to, essentially, a new planet."

Jamie Burgess, from the National Space Centre, said: "I think it is safe to say (he was) a very brave man, a very courageous man. To be able to have that bravery is an incredible quality in a person. He is a fantastic character and will be sorely missed."

An estimated 600 million people - a fifth of the world's population - watched and listened to the first moon landing, the largest audience for any single event in history. The moonwalk marked America's victory in the Cold War space race that began on October 4 1957 with the launch of the Soviet Union's satellite Sputnik 1.

Mr Armstrong's family said in a statement: "We are heartbroken to share the news that Neil Armstrong has passed away following complications resulting from cardiovascular procedures. Neil was our loving husband, father, grandfather, brother and friend. Neil Armstrong was also a reluctant American hero who always believed he was just doing his job. He served his nation proudly as a Navy fighter pilot, test pilot, and astronaut. While we mourn the loss of a very good man we also celebrate his remarkable life and hope that it serves as an example to young people around the world to work hard to make their dreams come true, to be willing to explore and push the limits, and to selflessly serve a cause greater than themselves."

Physicist Professor Brian Cox later tweeted: "Sad to hear about death of Neil Armstrong. I do think Apollo was the greatest of human achievements. For once, we reached beyond our grasp."