Neville Gafà has been working from the Office of the Prime Minister on a “voluntary” basis since his government contract was terminated by deputy Prime Minister Chris Fearne last week, Times of Malta has learnt. 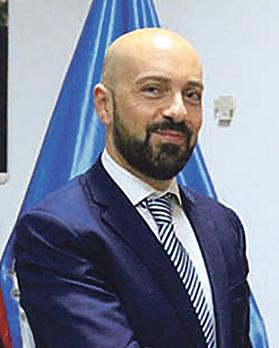 Sources said Mr Gafà was still reporting for duty at Castille, where he had an office, working on a “voluntary” basis.

Principle permanent secretary Mario Cutajar said he had “no visibility of any engagement for Mr Gafà” when asked about designation and in which entity was he employed.

According to other sources, Mr Gafà is expected to be engaged with a government entity in the coming weeks. His previous job as senior manager with the Foundation for Medical Services on a position of trust basis was terminated shortly after Times of Malta reported he had met with a Libyan militia leader during a trip to Tripoli last month. Mr Gafà had said he had “bumped into [the militia leader] on the street”.

He also insisted he had met with Libyan government ministers in a personal capacity and not as a “special envoy of the Prime Minister”, as reported in official communications from the Tripoli government.

FMS head Carmen Ciantar confirmed when contacted a few days later she had been directed by the chief of staff at the Health Ministry to terminate Mr Gafà’s employment as per Mr Fearne’s wishes.

He had not been fired but was being transferred

Prime Minister Joseph Muscat, however, stood by Mr Gafà, noting he had not been fired but was being “transferred”. He would not say where he was being transferred to and on what basis.

Dr Muscat said Mr Gafà had not travelled to Libya in an official capacity, adding it was, however, prudent to meet as many different people as possible in a country like Libya. Mr Gafà, he said, was doing “very good work”.

The sources that spoke to Times of Malta said “more than one” minister had been approached over the past few days on the possibility of engaging Mr Gafà in an entity falling under their political responsibility.

In 2016, when Mr Gafà served as an official at the Health Ministry, he had been accused by a whistleblower of having masterminded a medical visa racket. He had been investigated for allegedly charging Libyans €2,500 a month to secure medical visas, treatment and accommodation, along with an additional payment of €100.

The police found no proof of any wrongdoing.