€50 million are being made available to small businesses that are planning new capital investment projects.

Launched by Bank of Valletta and the Malta Development Bank, BOV SME Invest allows small and medium enterprises easier access to finance through reduced collateral requirements and a 3.5 per cent interest rate.

Interested businesses can seek financing ranging between €200,000 and €750,000 for a maximum maturity period of 10 years.

The €50 million financing package is being made available through a €10 million guarantee provided by the MDB. This is what allowed BOV to lower the collateral obligations, according to the bank’s Chief Credit Business Development Officer Albert Frendo.

Mr Frendo said that through risk-sharing programmes, such as the Jeremie and Jamie schemes, the bank has been better able to support SMEs since 2011.

He noted that micro customers made up more than two-thirds of its latest such scheme, while half of these same businesses have been around for five years or less.

Addressing the launch, Finance Minister Edward Scicluna said he was proud that work usually carried out by international banks was being implemented by Malta’s own development bank. 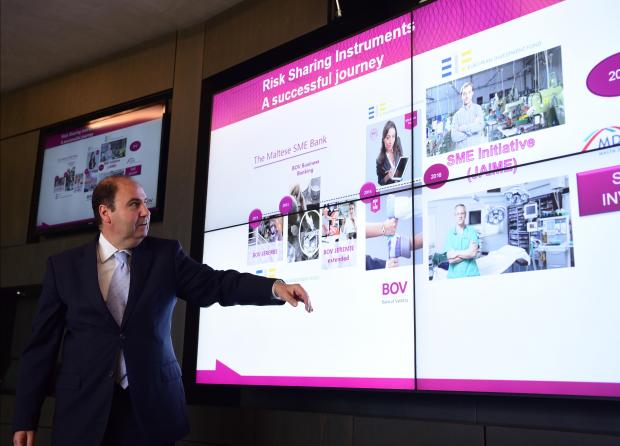 Meanwhile, Prime Minister Joseph Muscat said the decision to open a development bank was taken some four years ago.

The route to opening the bank was a challenging one as it had no precedent, and it required political will and capital, he said.

He noted that the €50 million planned to be injected in the economy would result in a total investment of around €90 million.

Dr Muscat also flagged international bank regulations as the “Achilles heel of the Maltese economy” and BOV’s atypical situation. The bank was a small one when compared to its European counterparts, however, it was a large one nationally.

The government was engaged in discussions with the bank about long-term solutions he said, adding that international rules would not change for our sake.