Mgr Charles J Scicluna was formally installed as the Archbishop of Malta this morning in a ceremony at the Cathedral in Mdina.

The reading of the Papal decree before concelebrated Mass was the highlight of ceremonies which started several hours earlier when Mgr Scicluna arrived in the parish church of his hometown Lija.

A fireworks salute was fired as he was greeted by a small crowd huddled below umbrellas. The Mayor, Magda Magri Naudi presented him a bouquet of flowers.

After Lija, Mgr Scicluna's car, escorted by police outriders, proceeded to Rabat where his first stop was in the Franciscan church of Our Lady of Good Health, where he met the sick and volunteers who organise pilgrimages to Lourdes. 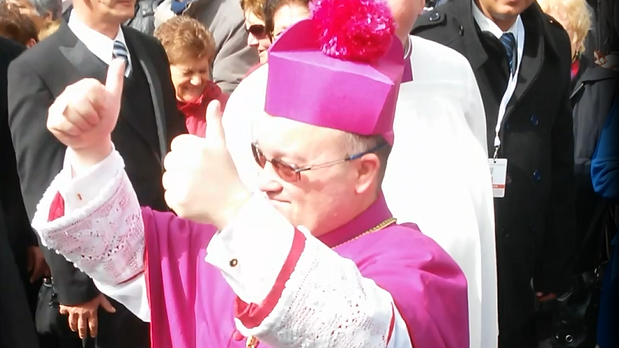 He then boarded an open top Jeep for the short drive to St Dominic Church also in Rabat. The streets were largely empty but a crowd waited for the new Archbishop outside St Dominic's. Mgr Scicluna gave the thumbs up before greeting the people and walking into the packed Church.

He was warmly embraced on the altar by his predecessor Mgr Paul Cremona amid more applause. The two then prayed together in the Grotto of Our Lady beneath the church.

The rain having let up, a bigger crowd awaited Mgr Scicluna outside St Paul Church, along with the combined L-Isle Adam and Count Roger bands and the pealing of bells.

The bands then accompanied Mgr Scicluna to Ta' Giezu Church, where he was greeted by another crowd. There was some humour when the Franciscans presented him with a statuette of a rather portly bishop. Mgr Scicluna burst out laughing.

He then proceeded to St Mark Church, where he was greeted by all the parish priests of Malta and prayed briefly with him. A crowd waited for him outside, including a group of singing members of the Neocatechumenal movement.

As the sun came out at last, Mgr Scicluna walked into Mdina where he was greeted at the gate by the Mayor and the Cathedral Chapter, which formed a procession that proceeded to the Cathedral.

Outside St Agatha Chapel he greeted the leaders of other Christian Churches and Christian traditions in Malta. Later, outside the cathedral, he greeted the head of the Muslim Community in Malta, the Imam Mohammed Elsadi. 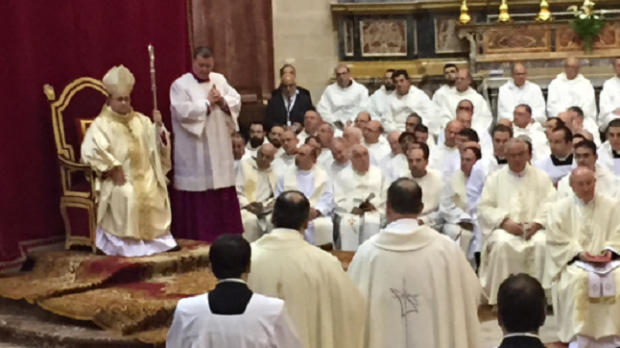 The highlight of today's ceremony was reached in the cathedral with the reading of the Papal decree appointing Mgr Scicluna to head the Church in Malta. The decree was dated February 27.

Archbishop Emeritus Cremona then led prayers from the new Archbishop.

The Nuncio, Mgr Aldo Cavalli then symbolically handed the new responsibilities to Mgr Scicluna by leading him to the catedra - known colloquially as the throne on the side of the altar. Applause broke out as Mgr Scicluna was congratulated by Mgr Cavalli and the dean of the parish priests.

Leading the congregation for the Mass in the Cathedral are President Marie-Louise Coleiro, Prime Minister Joseph Muscat, Opposition leader Simon Busuttil, the members of the judiciary, Mgr Scicluna's parents and the parents of the Bishop of Gozo, Mgr Mario Grech.

In his homily, Archbishop Scicluna said that to tend the flock of the Lord was now his call and duty and he would seek to achieve it with word and deed as well as love for everyone, while using his staff when faced by the wolf.

He prayed for the Lord’s help that the faithful may see in him as a source of help, solidarity and encouragement.

He gave thanks that he was not alone in his mission but had the help of those around him, including his ‘elder brother’ Bishop Mario Grech and Archbishop Emeritus Paul Cremona who had already been a great example to the people (applause).

Archbishop Scicluna also thanked the clergy and lay people for their service to the Church and said the Lord was inviting them all to work together and to follow the Lord.

At the end of the ceremony Archbishop Scicluna thanked all, particularly Mgr Cavali, who is to take up a new post as Nuncio in The Netherlands.

He also appealed to everybody: "Do not be scared of getting close to Christ".

At the end of the ceremony, as he prepared to leave the cathedral, the archbishop presented bouquets of flowers to his mother, to President Coleiro Preca and to Mrs Muscat, the prime minister's wife.

Later Mgr Scicluna told the media that he will dedicate his life to the Maltese people. It was a privilege to head the church in Malta, he said, and he asked for everyone’s prayers.

Mgr Scicluna will this evening be the guest of the Prime Minister and Mrs Muscat at Villa Francia.

The installation was the first since that of Archbishop Joseph Mercieca in 1976. Like Mgr Scicluna, Mgr Mercieca was already bishop when he was appointed to head the Maltese Church. In contrast his successor Mgr Paul Cremona was ordained bishop after he was nominated, and the ordination ceremony took place at St John's Co-Cathedral.

Mgr Mercieca's installation was relatively low key, his procession covered only the few metres from the official residence of the Archbishop to the Cathedral next door.

The new Archbishop's emblem was installed above the door of the Cathedral yesterday.