The daily number of COVID-19 cases remained in triple figures on Monday with 102 new patients - the same figure recorded the previous day.

There were 146, 129 and 174 new cases on Saturday, Friday and Thursday respectively, after a dip to 84 last Wednesday.

The Ministry of Health said 2,851 tests were carried over 24 hours and 82 patients have recovered. The number of active cases stands at 1,980.

While the authorities investigate the new cases, the ministry said that of Sunday's cases:

No information was given on the remaining cases.

COVID-19 has claimed 78 lives since first found in Malta in March. 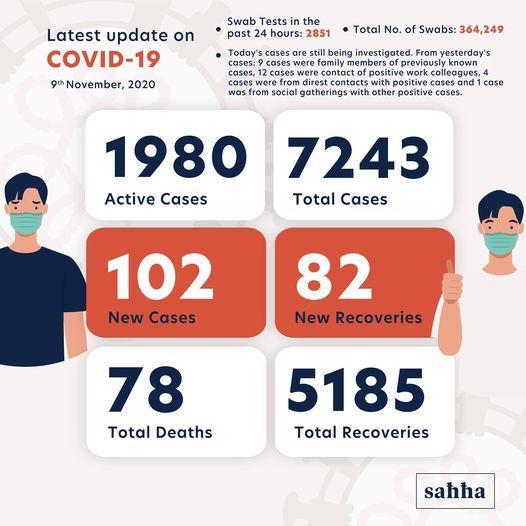 Earlier on Monday, the Maltese Association of Gerontology and Geriatrics (MAGG) said it was concerned about the impact of COVID-19 on older people.

"The recent spike in deaths due to COVID-19 and the explosion of positive cases suggests that not enough is being done to protect the people who gave us the privilege of our present," it said.

It observed that older people are now afraid to access health services for fear of contracting the virus or of being admitted to Mater Dei Hospital with a similar outcome.

"The danger of older persons living with health challenges and needing sporadic or regular medical care, but not getting it is real," it stressed.

The association insisted that older people should be at the centre of national decision-making processes and the authorities need to consider whether their decisions are ageist in nature.

"Our public health service is edging towards a state of full capacity and struggles to prepare for winter. Older persons should be given complete access to the same treatment as younger counterparts and health care decisions should be taken based on healthcare needs not solely on their age" it said.

The association called for more restrictive measures to safeguard older people and the vulnerable and a national strategy that guarantees priority of the influenza and COVID-19 vaccine to older people and vulnerable groups, until there is enough for all.

The ‘Maltese Association of Gerontology and Geriatrics’ is a network of professionals in the field of gerontology and geriatrics.