Saverio Laferla, the first Maltese to have produced complete statues of kartapesta (papier-mâché), was born on this day 325 years ago. This significant anniversary would have passed unnoticed as his date of birth had remained a mystery. His significance is that he popularised papier-mâché statues in Malta, paving the way for further developments during the 19th century.

Information about Laferla had been very limited and there was only speculation about when and where he was born.

Mifsud was quite familiar with Laferla, as this entry reveals. He provided legal counsel for him free of charge and they were members of the Archconfraternity of the Holy Crucifix of Valletta, so Mifsud’s testimony is considered reliable. 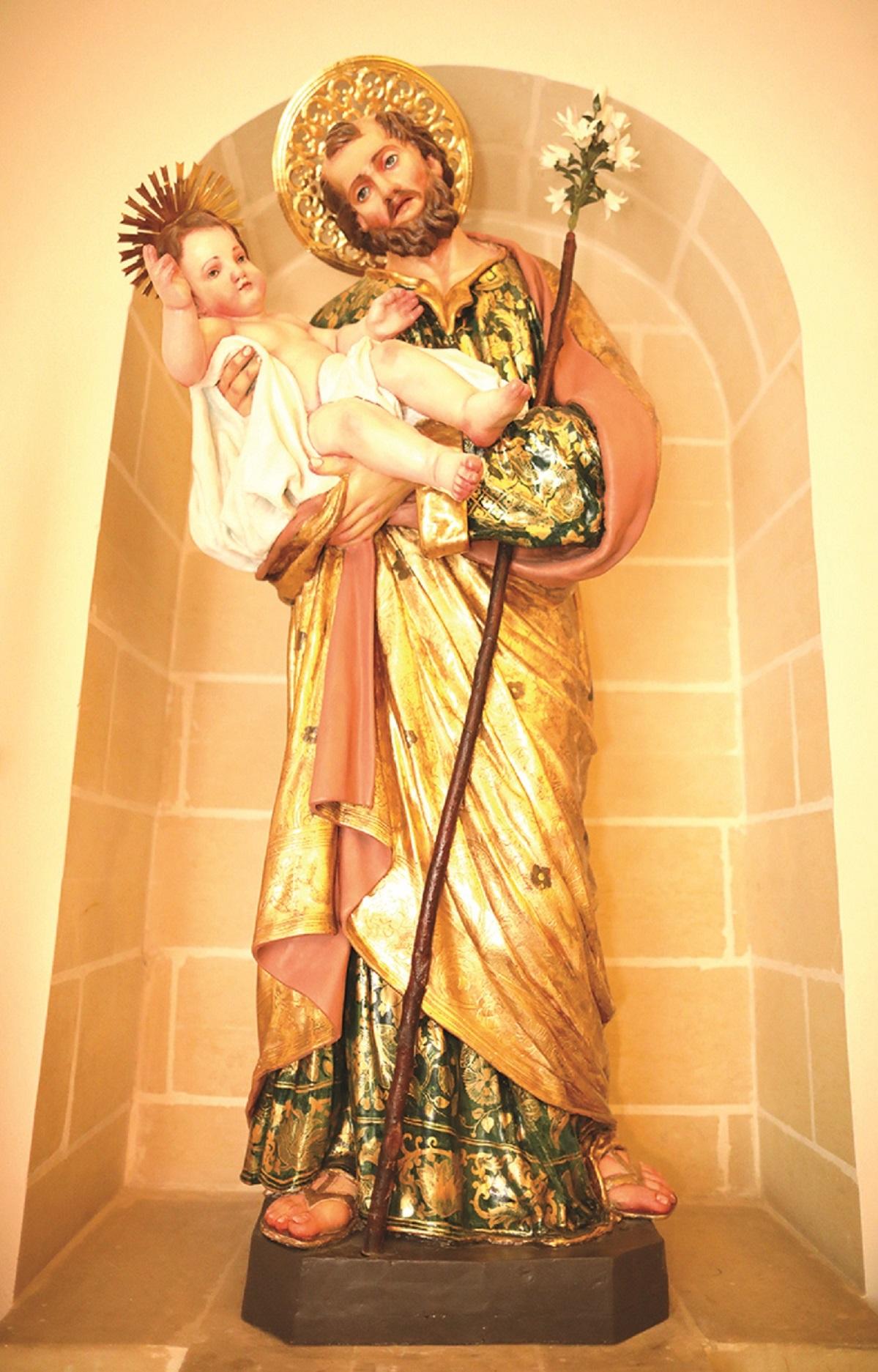 Laferla lived most of his life in Valletta as part of the Dominican parish of Porto Salvo. His parents and himself got married there and died there but his baptism was not registered there.

On January 13, 1678, Gerolamo Laferla, son of the late Mario and Angela, married Theodora, daughter of Gregorio Carbone and Magdalena, both from the Porto Salvo parish. Parish priest Giuseppe Cafa OP blessed the marriage witnessed by Matthiolo Farrugia and Giovanni Maria Agius. This union conceived at least four children: Maria, Angela, Margarita and Giuseppe Saverio. By 1695, the Laferla family, Theodora and her two daughters Maria and Angela, resided in the St Paul parish area. Margarita, born in 1691, is not listed, suggesting that she died young.

Omitted as well is Gerolamo, who is mentioned indirectly as the husband of Theodora. So, he wasn’t living with his family at that time. For 1696, the whole family is not listed along with the parishioners of St Paul’s.

Since, some months later, they reappeared at Vittoriosa, it is possible the entire family moved there. On January 26, 1697, a male child was born to Theodora and Gerolamo. He was baptised by Don Alessandro Fiteni three days later and named Giuseppe Saverio; his godparent was Fra Don Silverio Doz.

Practically nothing is known about Saverio’s childhood and earlier life, except that his father died at some point before Saverio got married and that the family moved back to the parish of Porto Salvo.

On October 25, 1716, he married Maria Bontis, the daughter of Pietro and Giovanna. Out of this marriage, eight children were born: a boy and seven girls. Natale died young like his sister Anna and the rest reached adulthood. According to Mifsud, Laferla was a professional barber but he was more known for his artistic creations, namely crib-making for Christmas and papier-mâché statues.

In 1732, Laferla joined the Archconfraternity of the Holy Crucifix of Valletta as a fratello. In 1737, at the age of 40, the same archconfraternity commissioned Laferla to produce new statues for the processions held on Fridays during Lent and on Maundy Thursday. These are the first documented artistic works by Laferla.

The Valletta Good Friday set was changed several times before Laferla but the members were not satisfied. Until then, all existing Good Friday processions used mannequins. However, some other mannequin statues had already been replaced.

Between 1737 and 1742, Laferla produced these statues for Valletta made entirely of papier-mâché: The Agony in the Garden, Christ Carrying the Cross, Veronica, The Crucifixion and Our Lady of Sorrows. The latter figure was a new addition to the Valletta procession. Later, Laferla would introduce it in Senglea, Żebbuġ and Rabat. This innovation at Valletta created a wave of change, leading Laferla to work for all the processions of Good Friday held during his lifetime. Whether documented or by attribution, Laferla produced statues for Vittoriosa, Senglea, Cospicua, Rabat, Naxxar, Qormi, Żebbuġ and Żejtun. As soon as the Valletta statues were ready, the Senglea Confraternity of the Holy Crucifix commissioned him to make new statues to replace the mannequins.

Between 1742 and 1744, he produced five statues for Senglea, including the miraculous Redentur, one of the most famous in the Maltese islands. Probably around the same time, the neighbouring cities of Vittoriosa and Cospicua also ordered new statues from Laferla.

This new artistic medium started to gain popularity even outside the harbour area. Concurrently with the Senglea commission, the parish of Żebbuġ commissioned Laferla to produce statues of Our Lady of Sorrows, St John the Evangelist, Veronica and St Vincent de Paul.

For the Żebbuġ parish, Laferla made a statuette of the Risen Christ to top the custodia holding the holy relic of the arm bone of St Philip of Aggira, designed by Pietro Paolo Troisi and made out of wood by Ignazio Portelli.

Another project designed by Troisi that Laferla worked on was the chapel of repose (sepulkru) for the Mdina cathedral, entrusted to Francesco Zahra. Laferla produced six statues of angels holding passion symbols and an allegorical female figure representing faith, in 1751. 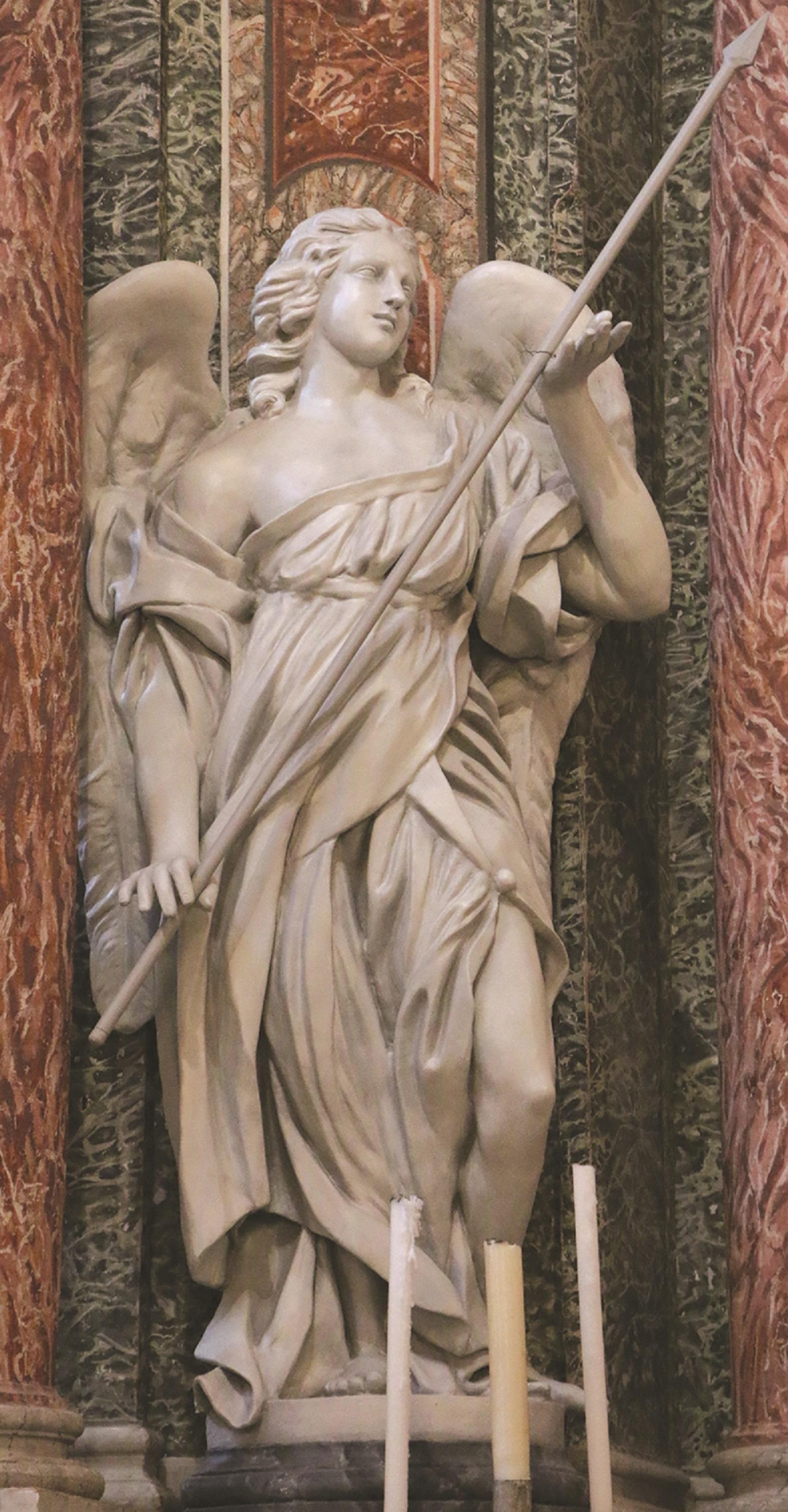 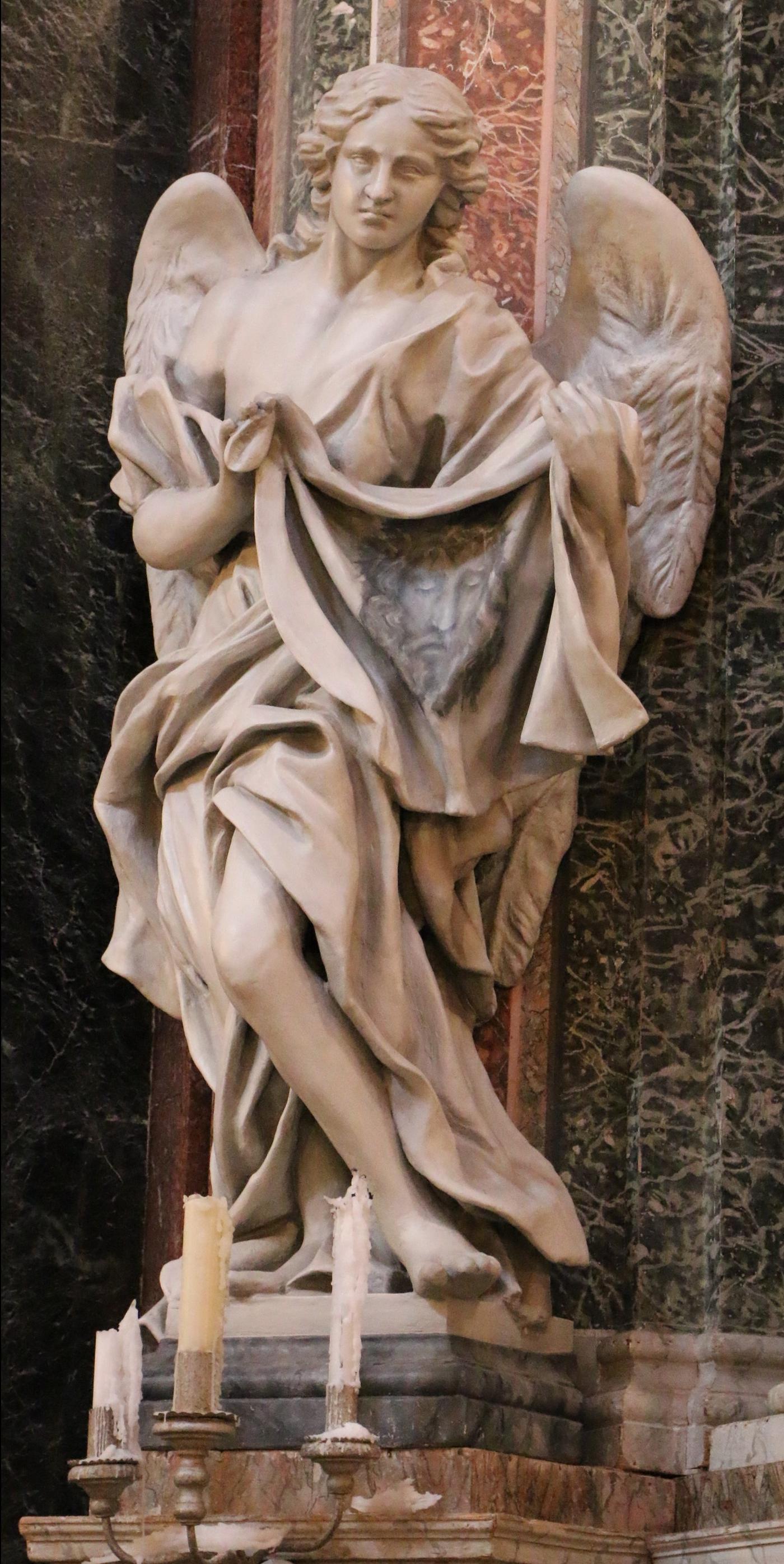 Simultaneously, he was working for the parish of Naxxar. Between 1749 and 1753, Laferla produced a whole set of Good Friday statues for Naxxar, including that of the Risen Christ.

Recent research has uncovered previously unknown works by Laferla, confirming his impact on Malta’s artistic landscape, as in the case of the Archconfraternity of St Joseph of Rabat.

Documentary evidence reveals that a processional statue of St Joseph and some of the Good Friday statues were produced by Laferla. The first commission was for a processional statue of St Joseph. A wooden statue had already replaced the mannequin one used until 1700. However, by 1750, it was deemed out of fashion. A new one was required in the most contemporary style and medium, as resolved during a consulta (consultation) held on March 22, 1750.

Saverio Vassallo was appointed to oversee the project. Laferla was chosen and the procurator went to Valletta on a carriage to deal with him. He requested 20 scudi for his work which did not include gilding. The gilding was done by Mro Giuseppe Buhagiar, who was working on the cathedral’s sepulkru (sepulchre). This processional statue was the first papier-mâché statue of St Joseph in Malta and continued to be used annually until 1889.

In 1757, Laferla was hired again by the Procuratore della Settimana Santa, Fra Giovanni Battista Zerafa, to make new statues for Good Friday. The situation of the Rabat’s Good Friday procession was identical to that of Valletta and Senglea.

For a long time, mannequins were used but it was decided to upgrade them and have new, papier-mâché ones. These were the Agony in the Garden, Christ Carrying the Cross and Our Lady of Sorrows, for 25 scudi each. He also repainted the Ecce Homo and the Dead Christ. The payment was made in several instalments. His heirs received the last payment, as he had died in the meantime. So, in all probability, this work was his last one for Rabat.

Several payments made to Laferla for the Good Friday statues of Rabat.

Until now, no other papier-mâché artist was known before Antonio Mifsud in the early 19th century.

New evidence, however, shows that papier-mâché statues continued to be produced soon after Laferla’s demise. In 1770, the Procura della Settimana Santa of Rabat wanted to replace the mannequins of the Crucifixion Group (Vara l-Kbira). Laferla was dead, so they had to find another artist. 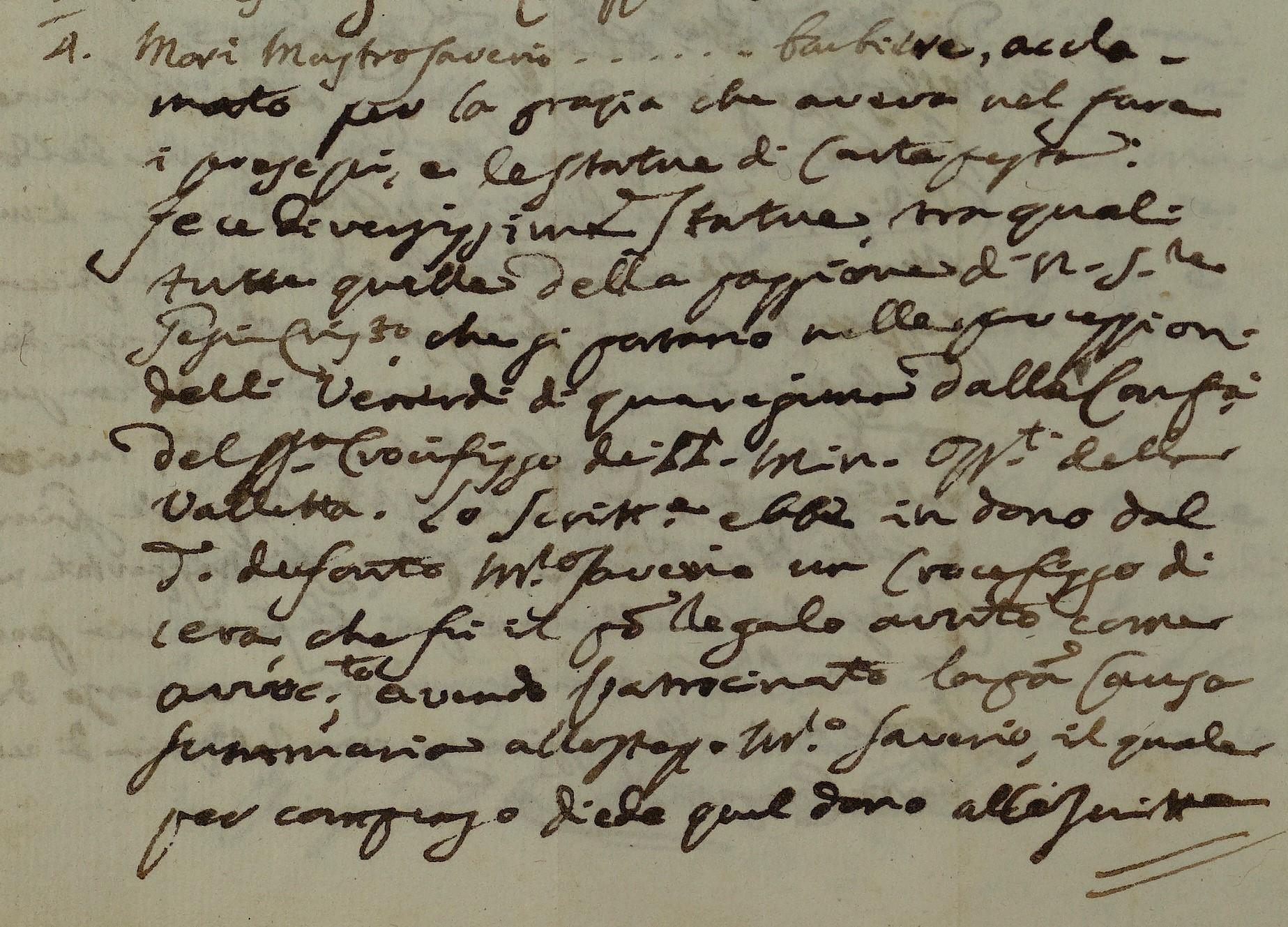 Ignazio Saverio Mifsud's entry about the death of Laferla, found at the National Library.

They turned to Francesco Mifsud, ‘maestro di figure di cartapesta e stucco’ (master of papier-mâché statues and stucco) from Valletta. He produced three figures: Our Lady, St John the Evangelist and St Mary Magdalene. The Crucifix was procured from elsewhere. Mifsud also created another statue representing the Risen Christ. This was used in a procession on Easter Tuesday, starting in 1770. Soon afterwards, the procession was discontinued and, in 1784, the statue was sold to the parish of Dingli.

Although Laferla was a Maltese pioneer in making papier-mâché statues, he suffered from artistic and academic neglect. May this anniversary provide the opportunity to give him due credit.

This research would not have been possible without the accessibility provided by the new website Malta Parish Archives, www.maltaparisharchives.org.