Plans are under way to develop four new tunnels and reconstruct St Andrew’s Road to help solve the traffic problem, improve the safety and efficiency of the arterial connections in Pembroke, St Julian’s and other nearby areas and localities.

Pembroke-St Julian’s Connections is a new project extending from the Coast Road to Regional Road, before the Manwel Dimech Bridge and the northern portals of the Ta’ Giorni tunnels, Infrastructure Malta announced on Saturday.

On Friday, the authority submitted the project’s initial development applications to the Planning Authority, to launch public consultations and request the necessary authorisation as part of the permitting procedures.

This project includes the reconstruction of St Andrew’s Road and part of the Coast Road in a new four-lane design, to eliminate several traffic lights junctions and other bottlenecks along this route, as well as build four new tunnels to facilitate safer and quicker access to and from Pembroke, Paceville, St Julian’s and Swieqi.

Through these upgrades, Infrastructure Malta said it is optimising the capacity and connections of the region’s road network to reduce traffic in several residential roads in Pembroke, Swieqi and St Julian’s, and the resulting air pollution and accident risks, while developing the necessary infrastructure to meet the area’s future transportation requirements.

The area has been choked with traffic for years, with the problem expected to be exacerbated as a result of the new St George's Bay db project. 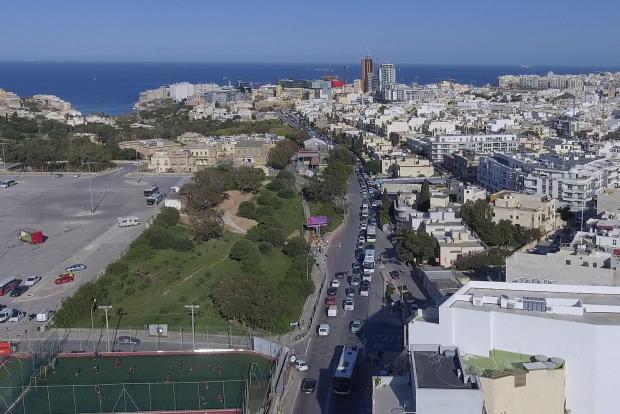 The longest of the four new tunnels will connect the southern end of the Coast Road (High Ridge area) to St George’s Bay. This new 1.5-kilometre underground link will include two lanes, one in each direction. It will completely bypass the residential areas of Pembroke and Swieqi, while providing quicker connections to the Paceville and St Julian’s seafront areas from the northern parts of Malta.

Unlike previous proposals, the new infrastructure will improve public access to several areas in and around Paceville and St Julian’s, and not to specific developments only, IM said.

A 500-metre one-lane tunnel will link the northbound carriageway of Regional Road, before reaching the Paceville traffic lights junction, to Pembroke (Walter Ganado Street), for easier access to this locality from the southern part of Malta.

The third tunnel will connect the same carriageway of Regional Road to St George’s Bay, to provide a safer and quicker alternative to the existing Paceville traffic lights junction.

Another new connection between Olive Street, in The Gardens area of St Julian’s, and Regional Road’s southbound carriageway, just before the Manwel Dimech Bridge, will also be developed. This new link will make it easier for residents in this area to travel to and from their their homes without having to use the Paceville or Spinola junctions, which are being upgraded as well.

St Andrew's Road to be reconstructed

St Andrew’s Road and the southern end of the Coast Road will be reconstructed to eliminate several parts of this TEN-T road corridor that currently narrow down to one lane in each direction.

The Pembroke-St Julian’s Connections project will widen these roads to four lanes, whilst eliminating a number of bottlenecks, including the optimisation of the Paceville junction, the Pembroke T-junction with Walter Ganado Street and the Swieqi priority intersection opposite the Luxol Grounds.

These upgrades will lead to significant travel time reductions in this arterial road corridor, while reducing accident risks and congestion pollution in several nearby residential roads, particularly in Pembroke and St Julian’s, the authority said.

Infrastructure Malta said it will continue meeting several stakeholders, including the local councils that will benefit from this project, to further refine these plans and make sure that this part of the country’s arterial road network is adequately consolidated to meet current and future transportation requirements.

Whilst the Pembroke-St Julian’s Connections plans will be made publicly available by the Planning Authority as part of the permitting process launched on Friday, an outline design of the four tunnel routes and the main upgrades being proposed is available on Infrastructure Malta’s Facebook Page.