No-entry signs blocking the public from entering various areas in the countryside, some leading to the foreshore, are “mushrooming” across the island spurring environmental lobbyists to call for stronger laws safeguarding people’s right to enjoy Malta’s limited nature areas.

Some of the “no entry” and “private property” signs that recently cropped up in areas like Wardija, Fomm ir-Riħ and Kunċizzjoni are believed to be illegal.

She said this had a major impact on people who wanted to walk in the countryside, as alternative routes are not always available. 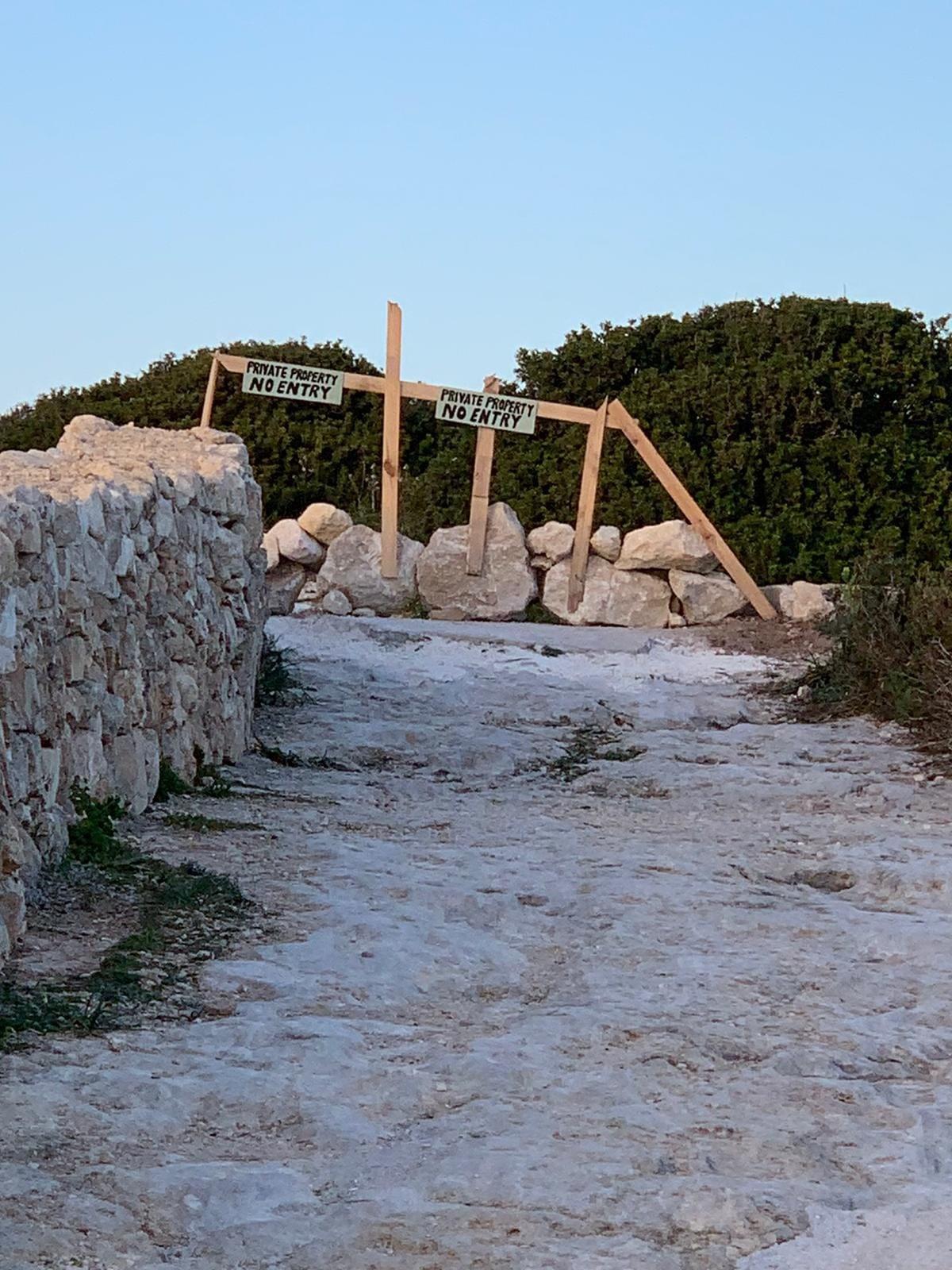 Ingram Bondin from the Ramblers Association agreed: “We are gravely concerned about the closure of countryside paths, many of which have been used by the public for many years. We call on the government to legislate a new right of way law which marries orderly access to the countryside with the need of the public at large to access nature. This is the only way to avoid growing frustration and conflict.”

Vella added that this was particularly detrimental in this time of the coronvirus pandemic, when people had a greater need than ever to get fresh air and healthy exercise away from crowded areas.

To make matters worse it is “almost impossible” to prove whether these notices are rogue or legal, Vella said.

The main problem is that, as things stand today, there is no easy way of knowing whether a “no entry” is legitimately signposting private land or placed there abusively, confirmed lawyer and activist Claire Bonello.

She explained that, to find out if land is private, one would have to carry out searches at the Lands Authority - which is a “slow and bureaucratic process”.

Over the past weeks, various examples of these signs in the countryside have been flagged on social media by various environmental activists. In a Facebook post, independent candidate Arnold Cassola shared a photo of a makeshift gate and no-entry sign that recently popped up in Triq il-Fortizza, Wardija. After consulting with a lawyer, he is insisting that the sign is illegal.

Cassola even took the matter to court last month when he filed a judicial letter in the First Hall of the Civil Court asking the Transport Authority, responsible for sign posts, to remove illegal signage that appeared in the countryside.

In the letter, Cassola made reference to a number of “illegal and abusive” signs that appeared in areas like Fomm ir-Riħ, tal-Abatija and l-Kunċizzjoni.

Speaking to Times of Malta Cassola said: “We, Maltese and residents, are already limited by the small size of our country. Unlike other bigger countries, we have no lakes, no rivers, no mountains, no forests.

"Our only safety valve for some stress relief is the countryside and the seacoast.

"It is simply unacceptable that, while relatively huge tracts of land, even agricultural, are being taken over for the building of skyscrapers and flyovers, access to the countryside and to the coast is being blocked off.

In a post on Facebook, the Ramblers Association noted that someone installed a no entry sign outside the country lane leading to Fomm ir-Riħ. The sign reads: Private property. Enjoy the countryside from the road.

In the post they added that the government, the association and the landowner were presently negotiating in good faith to provide safe access to the foreshore through the cliff side passage.

“We cannot possibly have the lane leading to the cliff side passage blocked by another third party now,” the association said.

Questions sent to the Lands Authority and the Economy Ministry, asking if there are plans to address the situation, remained unanswered by the time of writing.

What areas are deemed public domain?

The Public Domain Law, enacted in 2016, states that that the coastal perimeter (defined as that part of the land which lies 15 metres from the shoreline inwards, whether it is foreshore, landmass or cliff or is a combination of them), internal waters such as bays and the seabed and subsoil are automatically public domain.

The foreshore is that part of the coastal perimeter, including where it exceeds 15 metres, which is normally covered by water. Where the foreshore is landlocked by private property, the government has the right to compel private landowners to form a right of way through the private land to allow the public to reach the foreshore.

So, are there other public domain areas apart from the foreshore?

Other than that, other sites can be listed as public domain, following approval in Parliament.

According to the law, public domain sites can be proposed by environmental NGOs and ministers.

Every year, a consultation exercise should be held for the public to submit their comments on sites designated for public domain status.

Over the years NGOs have listed over 20 sites - including Manoel Island, Comino, Pembroke, Simblija, Fomm ir-Riħ - but none were declared public domain so far.

What about the countryside, is it public domain?

Not automatically since some land is private.

The public has access to all public pathways. The problem is that the government has not published a definitive map of countryside lanes.

To check whether a lane is public, one has to go to the Lands Authority. There are lanes which are private.

In some cases, if the public has used the lane for at least 30 years, the public gains a right of servitude through the lane. But this does not apply in all cases as other legal requirements may also have to be met.

The facts have been compiled with the assistance of Ingram Bondin and Claire Bonello.