Protestors gathered outside the police headquarters in Floriana on Friday evening, asking who will take responsibility for Bernice Cassar's murder.

The protest comes three days after the femicide of Cassar, a mother of two, who was shot dead as she was driving to her office.

Cassar is the first murder victim since Malta introduced the concept of femicide into the criminal code, and the third woman murdered this year.

The police believe the killing is a consequence of a history of domestic abuse between her and her husband, Roderick Cassar. He was charged with the murder on Thursday and pleaded not guilty to a raft of accusations.

Members of Bernice's family attended the protest together and some were seen crying as they walked alongside a group of over 100 people. President Emeritus Marie Louise Colerio Preca, independent candidate Arnold Cassola and AnneMarie Grech, the wife of Opposition leader Bernard Grech, were also spotted at the event.

Caricia Pisani Sammut, the daughter of the late Christine Sammut was also present in the crowd. Sammut was shot dead by her ex-boyfriend, Kenneth Gafà, as she sat in her car in December 2010.

"I'm here for Bernice, and all the other women," she told Times of Malta. 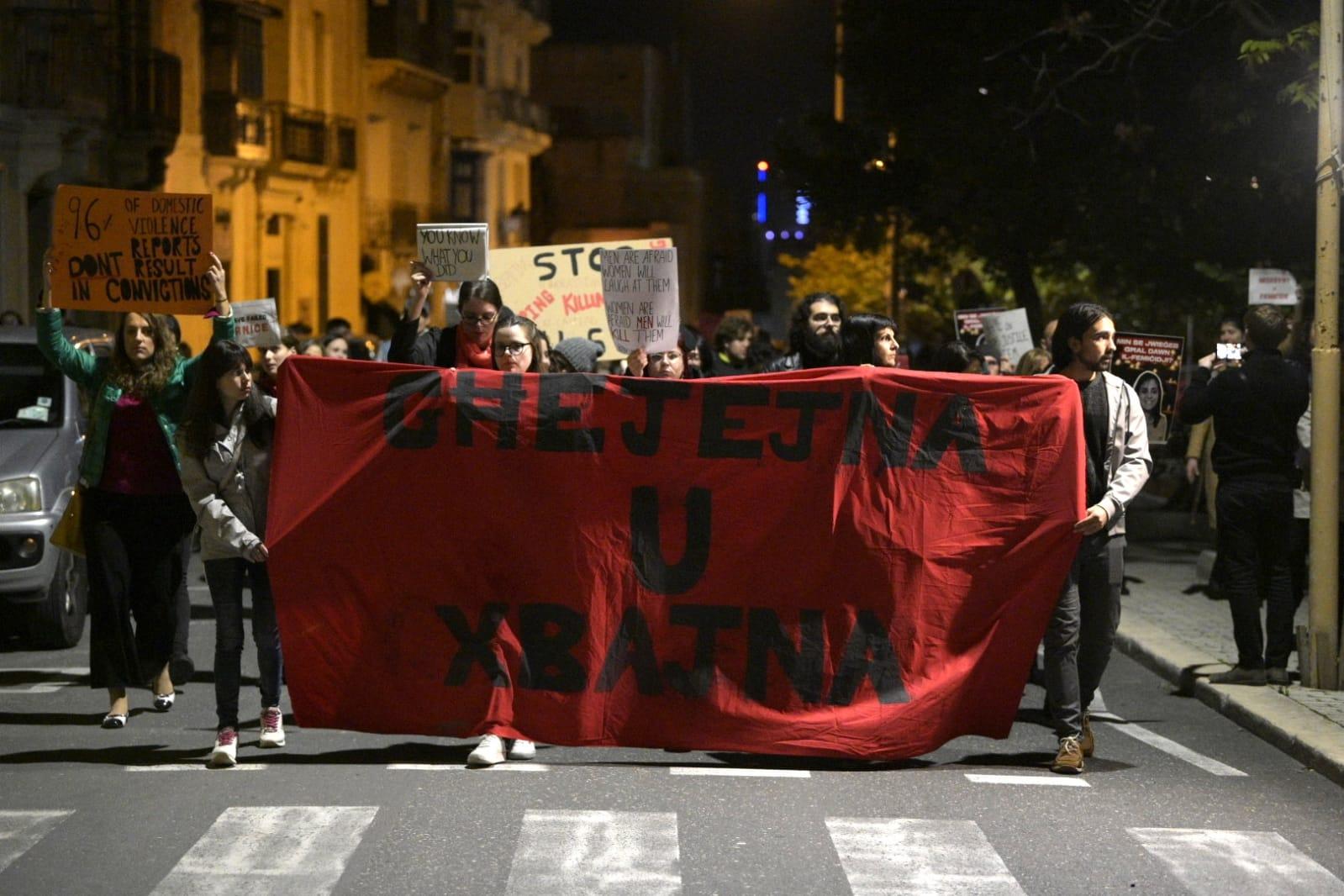 Protestors carried placards reading "you know what you did", "no more femicide", and "min se jwiegeb ghal dawn il femicidji?" (who will answer for these femicides?), while others held photos of Cassar.

They then marched from the police headquarters towards Valletta, chanting "no more femicides", "we won't be silenced" and "stop femicides" as they walked.

The crowd came to a halt outside the parliament building in Valletta, where the chants and demands for accountability continued. 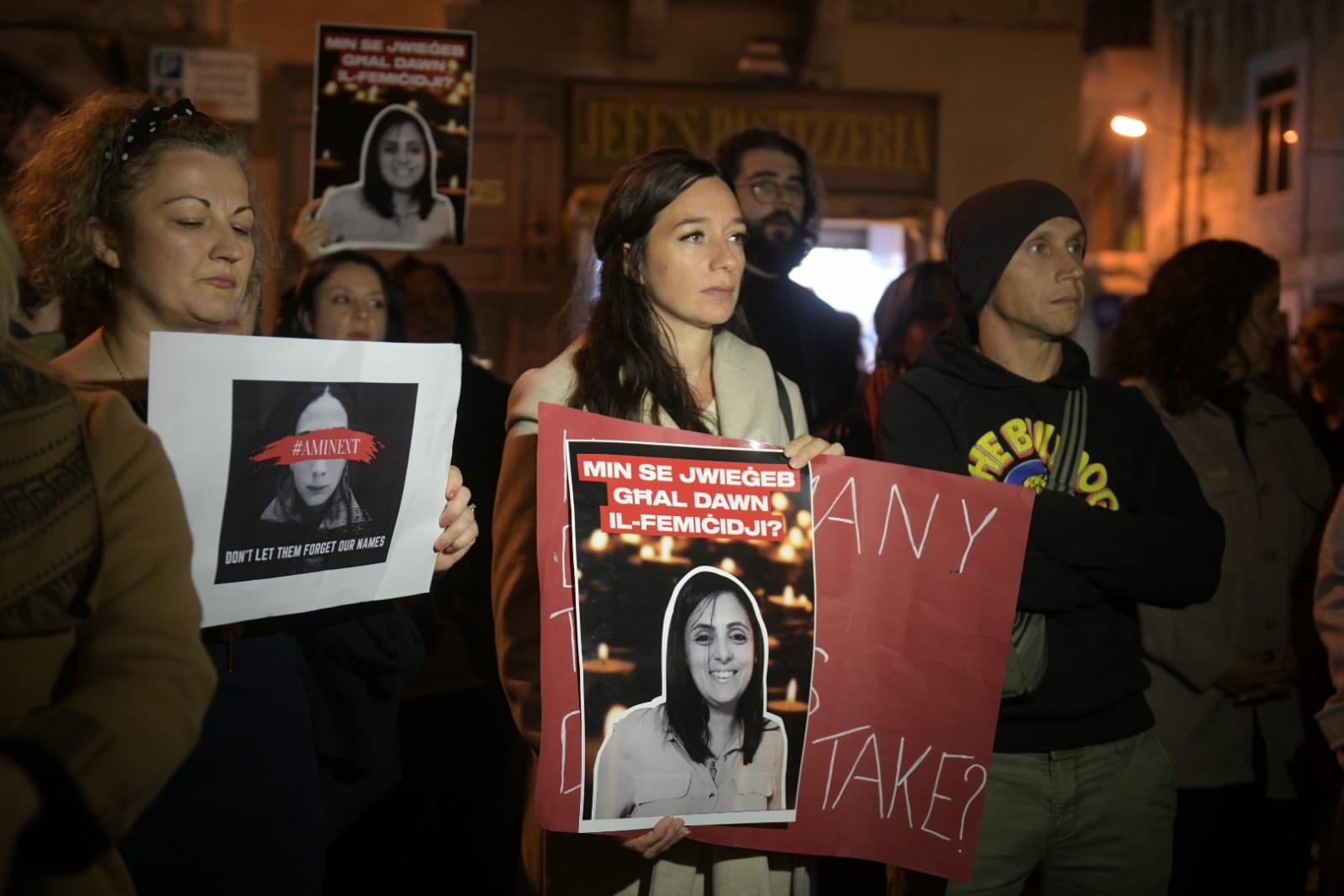 Protestors held placards with Bernice Cassar's photo on them as they marched towards Valletta. Photo:Matthew Mirabelli

Friday's protest coincided with International Day for the Elimination of Violence Against Women.

The police have confirmed that Cassar filed five police reports against her husband in the year before she was killed, with her final report being lodged just a day before her murder. 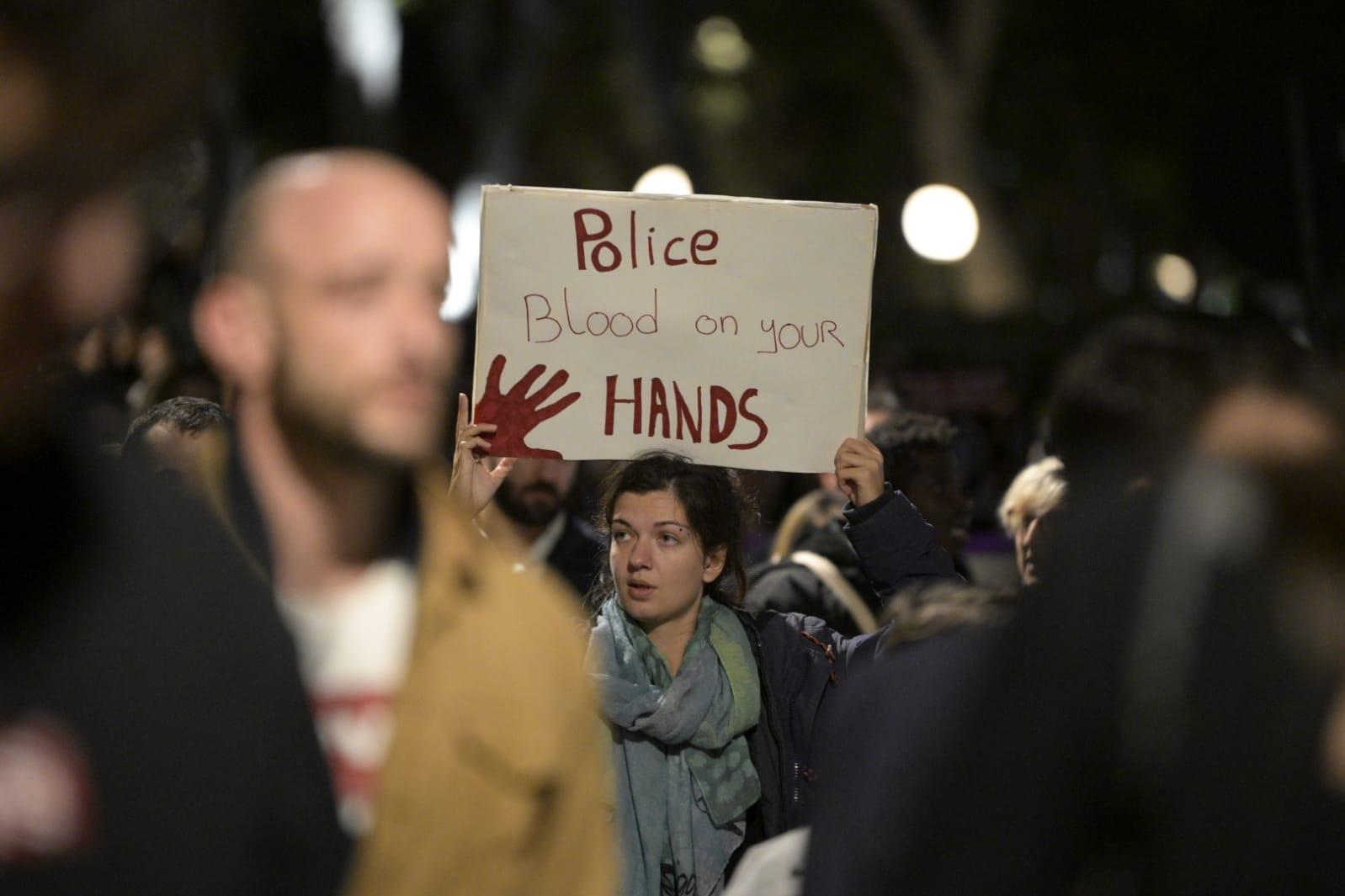 'It could have been you'

Speaking on behalf of Moviment Graffiti, Angele Deguara asked why the government, the police and the legal system all allowed another woman to be murdered.

"Another woman has died. Another friend, another mother, another daughter, another sister. It could have been your mother, sister, daughter, or friend," she said outside the law courts as protesters gathered behind her

"It could have been you."

She also asked who will take responsibility for all the femicides committed in recent years. 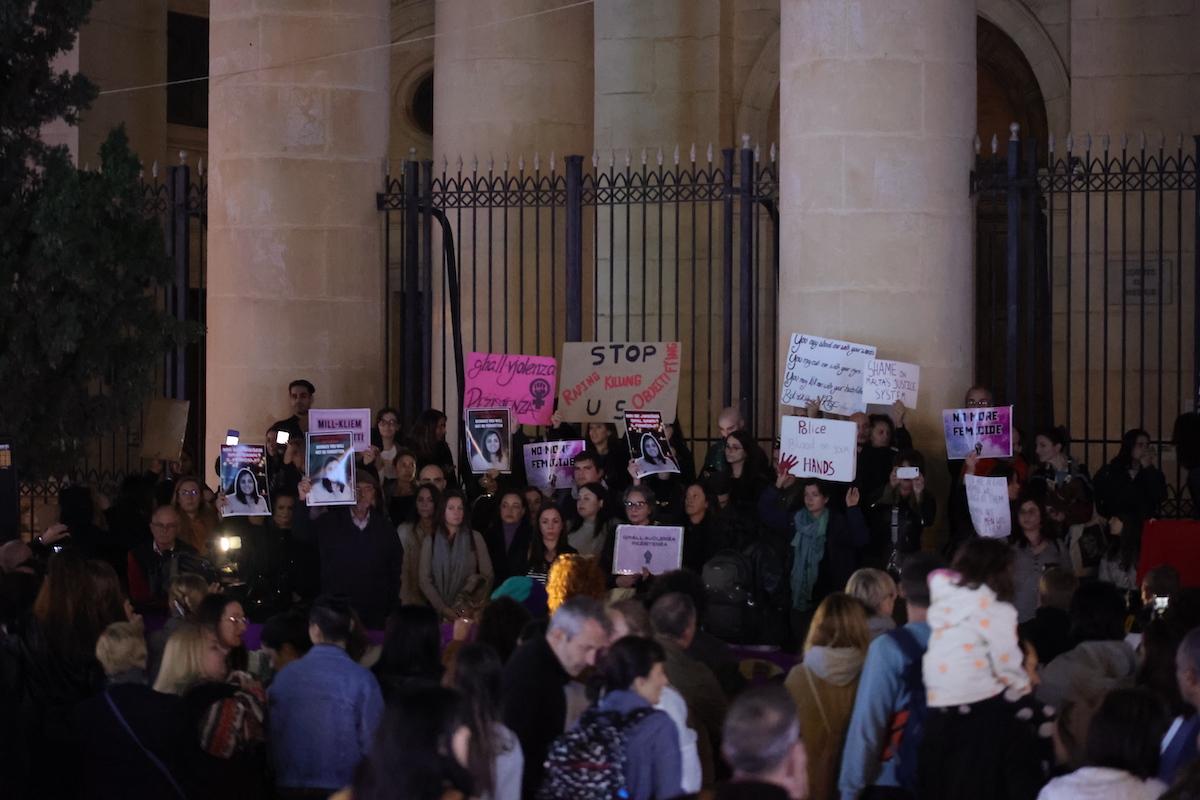 The protesters on Friday. Photo: Graffiti

"Can't we see that our society is not working? Can't we see that it is not enough that one magistrate takes care of all the domestic violence cases, especially as the numbers keep growing," she said.

Currently, only one magistrate handles domestic violence cases although Prime Minister Robert Abela has said one of the new magistrates in the process of being appointed would also focus solely on such cases.

Also speaking at the protest, lawyer Lara Dimitrijevic, who founded the Women's Rights Foundation, said Cassar did everything she could to save herself and her children, but the system has failed her.

"All the conferences, all the talk, and here we are again, another woman has died. How much blood must we have on our hands to show that this endemic must end?

"How many times must we go onto the streets to call for change for those in power to realise we still have these problems?" she said. 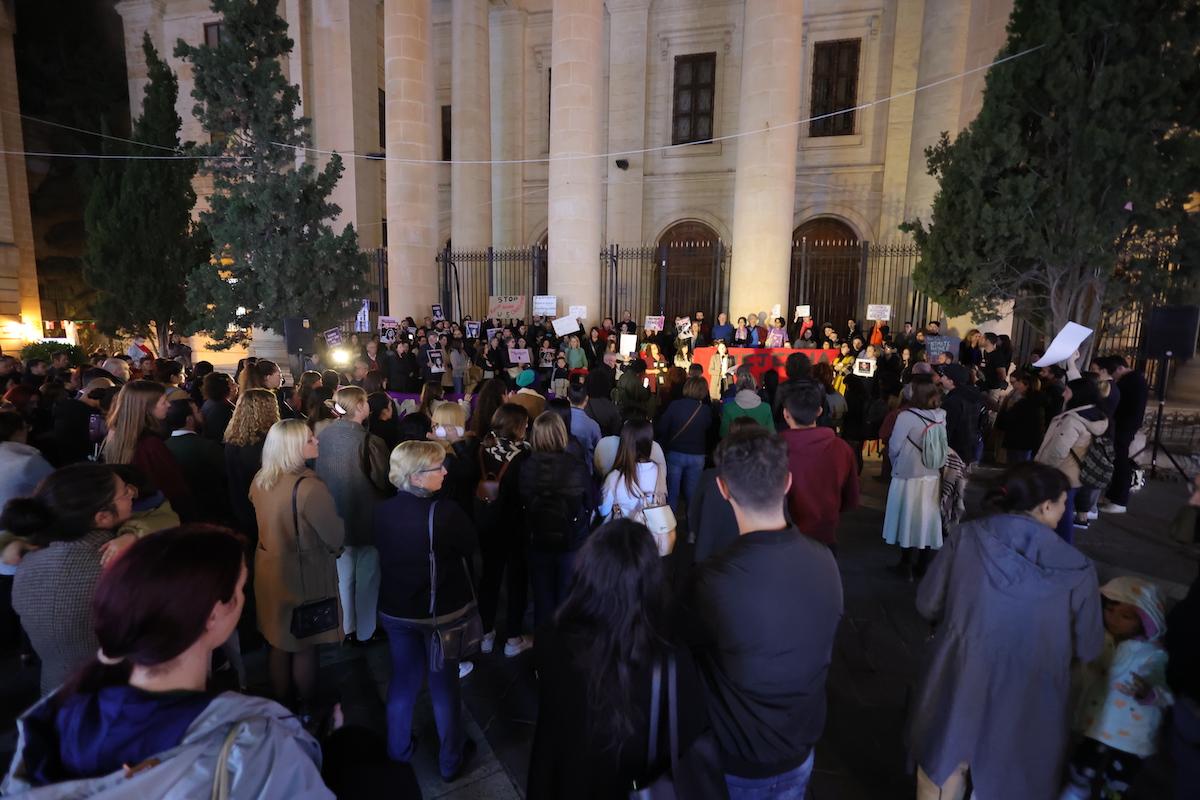 The crowd outside the law courts. Photo: Graffiti

Activist Andrea Dibben said that she was "furious" at the 16-days of campaign against domestic violence, launched by the government on Thursday. Posters urging people to "reach out" were useless, if the authorities continue to fail to act, she said.