A group of non-EU families residing in Malta have been told by Identity Malta they can no longer keep their children here, since they do not have enough money to sustain them.

The government entity over the past few days sent out letters refusing the residence permits of 22 children as young as two years old, asserting that as of the date of receipt of these letters, the minors would be in Malta illegally.

According to the agency, their parents do not satisfy the financial requirements of a policy, which requires third country nationals to earn €19,000 a year, as well as €3,800 extra for each child. The figures do not include bonuses or overtime.

The policy can be waived “at the sole discretion of the director” if both parents are in employment but do not reach the amount stipulated. Prior to this year, this was often the case with many third country nationals who worked in low-paid jobs.

However, in September, Times of Malta reported that many families were not being allowed to lodge applications because their earnings failed to meet the financial requirements of the policy.

Asked if staff at Identity Malta had the right to refuse applicants to lodge an application, a spokesperson for the government agency said this would be the case “if it is deemed to be inadmissible or incomplete”.

The families, predominantly Serbian nationals, protested that they were being denied the opportunity to have the policy waived by the director on the basis of their circumstances, or to even appeal the decision.

Since then, they have formed a group called ‘Parents in Malta’ and have twice headed to Identity Malta demanding the authorities to accept their applications or give them written proof of their refusal, once in September and another time this month.

This week many parents received the outcome of these applications and were refused permits for their children because their combined annual salaries fell short of the mark by as little as €143.

This was the case of Vladica and Dragana Popovic, the parents of two girls, who declared a combined basic annual salary of €26,457 and were required to earn €26,600.

While Mr Popovic has been in Malta for two years, his wife and children joined him six months ago to apply for residence permits.

He and his wife are in shock over Identity Malta’s decision to refuse their applications over such a small amount of money, but he told The Sunday Times of Malta the worst impact has been on the children who feel isolated and depressed.

“They are suffering the worst because they haven’t been able to start school, they have no friends, they don’t leave the apartment.

If such conditions were to be sidelined, migrant families may experience undesirable social conditions

“My wife and I get nervous. Of course we are fighting to stay together,” Mr Popovic said. Velimir and Sencica Dulo whose combined basic annual salary is €26,400 is also short of the mark by a meagre €200.

With bonuses and overtime he would make over €30,000, but Identity Malta refuses to consider this.

He is also in disbelief, seeing he had sought advice from the human resources department at his company, and was told he would not have any problem getting residence permits for the children.

“My wife are legal employees. We are paying all taxes and contributions according to Malta laws. My kids started school, are learning Maltese and making new friendships. What to do now?

“It’s Christmas time, this should be nicest part of year for our families. I think that no one deserves this.” 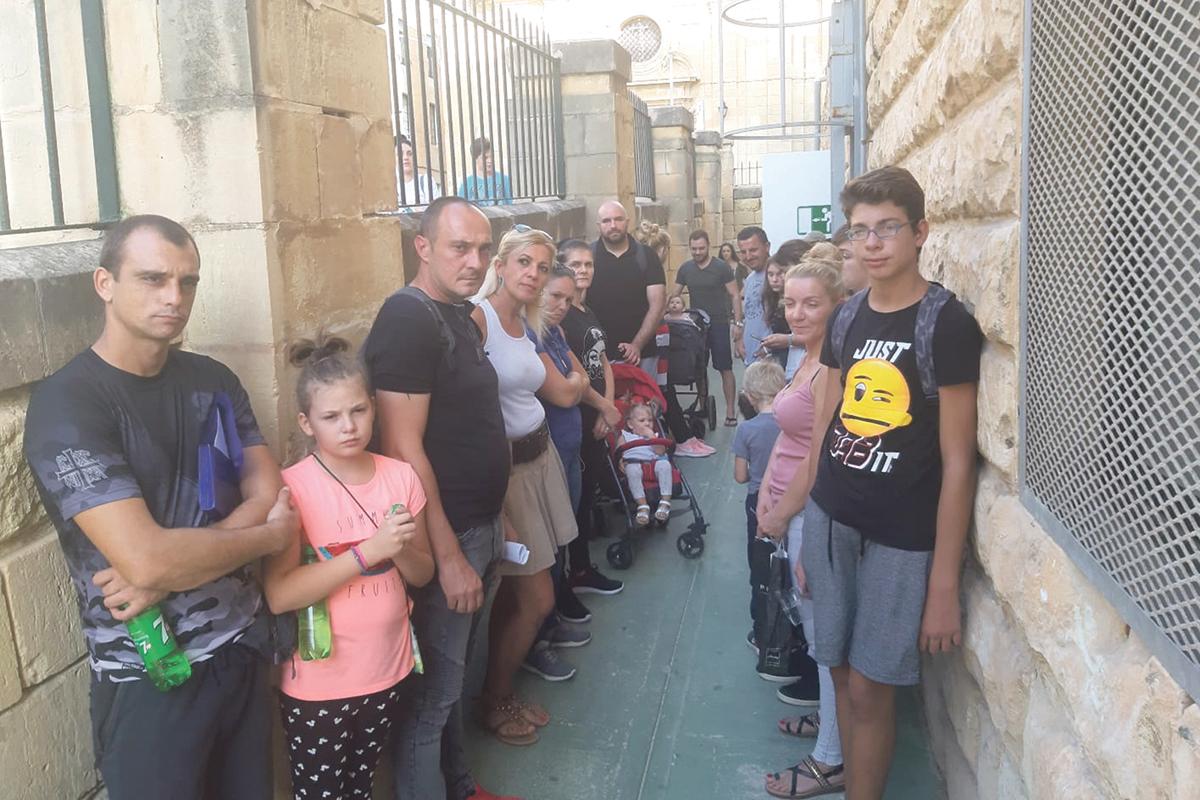 Families gathered at Identity Malta in September to demand the agency accept the residence permit applications for their children.

Aleksandra Ilic, explained how her two-year-old, Neda, who was born in Malta, was considered “legal” in all other institutions since she has an ID card, except for Identity Malta.

Forced to apply for a residence permit for her child, she is one of the parents who were sent a refusal letter this week and left in a state of anxiety.

“We cannot send her to Serbia, that’s not an option, because she can’t start school there, she barely speaks Serbian. She speaks English. And we have nobody to send her to.”

Maja Brown, on the board of the Serbian Community has attempted to contact Identity Malta for a meeting and has also reached out to other avenues to no avail.

“There is no will to resolve this issue. These policies are clearly discriminatory. Why won’t Identity Malta consider other sources of income like renting out properties in other countries or savings?”

Ms Brown claimed the Commissioner for Children has not been helpful even though Malta has signed international conventions meant to protect children.”

She underlined that over the last year she had observed a change in the system from one that accommodated foreign workers and their families to one that was rejecting them.

One of the founders of Parents in Malta, Ana Zdravkovic, said parents were feeling overwhelmed and at a loss as to where to turn.

“We are desperate and sad because we don’t know what to do anymore. We are not asking for much, just a normal and quiet family life here in Malta.”

Questions sent to Identity Malta asking specifically about these cases were not answered. However, a spokesperson for the government agency said the income requirement stipulated in the policy is meant to guarantee a decent standard of living to migrant families.