The government is expected to "clarify" social distancing rules at cinemas and theatres, in an apparent U-turn after new guidelines on health measures meant to come into effect on Monday left the entertainment industry confused and angered.

On Friday afternoon Arts Minister Jose Herrera said in a Tweet that following discussions with Health Minister Chris Fearne, social distancing measures for cinemas and theatres "have been clarified and protocols are to be updated".

Soon after, the Malta Entertainment Industry and Arts Association told its Facebook followers "now that seated arts events can continue operating without any further restrictions, we will continue with our work on the return of standing events".

The association said it would be updating its proposals for standing events and continue discussions with the health authorities to ensure that a plan is in place for all operators in the arts and entertainment sectors to reopen in a safe and sustainable manner.

Times of Malta has asked the Health Ministry for clarifications, but questions have not yet been answered.

According to standards for establishments requiring proof of vaccination for entry, issued by the Health Ministry this week, audiences in cinemas and theatres would have had to sit at least 1.5 metres from another person.

This has not been the case in previous months, with theatres and cinemas open to vaccinated persons seated right next to each other, confirmed Malta Entertainment Industry and Arts Association president Howard Keith Debono.

Infuriated that the situation was deteriorating for cinemas and theatres, he said “it is even worse than that,” pointing to discrimination against the arts and entertainment industry as opposed to others.

Mandatory vaccination is required to enter restaurants, for example, from Monday. But these have been able to return to pre-COVID-19 seating arrangements, doing away with the two-metre social-distancing rule.

“MEIA is extremely concerned about the inconsistencies published in the latest standards for establishments requiring proof of vaccination for entry,” Debono said. 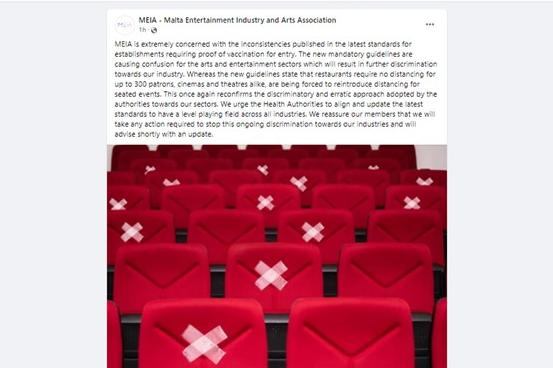 The MEIA president is angered about new social-distancing guidelines.

“The new mandatory guidelines are causing confusion for the arts and entertainment sectors, which will result in further discrimination towards our industry,” he said, pointing to the “erratic approach adopted by the authorities towards our sectors”.

The association demanded clarifications, urging the health authorities to align and update the latest standards for a level playing field across all industries.

It reassured its members it would take “strong” action to stop the ongoing discrimination, which had “no scientific basis”.

Debono insisted theatres had been proven to be safe and were not among the super spreaders.