Clare Azzopardi has already established herself as an author of fiction with her short stories  (her Kulħadd ħalla isem warajh volume of stories was particularly outstanding and has also been published in Hungarian) and now her readers are being offered her first adult novel, Castillo. 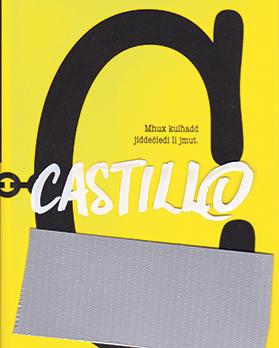 Like many other novelists all over the globe, she has chosen a murder as the core of her plot.  The person killed is a novelist, K. or Cathy Penza, whose crime novels with an Inspector Castillo as the protagonist came out in the 1970s and early 80s and were cut short when Penza was killed by a car bomb (intended for her?) in December 1986.

When this happened, her twin sister Emma Barbara unexpectedly abandoned her home, her husband and her young daughter Amanda, and went to live on her own.

The novel opens with a  grown-up Amanda, who is seeking out the mother who abandoned her 25 years ago. Emma Barbara, now middle-aged and somewhat slovenly in her dress and in the general neglect of the house, gives Amanda the shocking news that she herself has committed a murder – that of a man called Tommy, a neighbour in Ħal- Għargħur where she lives.

Tommy had a very sinister reputation and seemed to have a dislike for Cathy Penza and her novels, and Emma saw for herself that he had a garage half-full of bombs and has been tipped off to be the bomber.

Emma tries to get to know all she can about her dead twin, had taken many of Cathy’s papers, including letters of praise and threatening ones and has even found the manuscript of Cathy’s last, unpublished novel.

She also tells Amanda that she is the one who killed Inspector Castillo, Penza’s protagonist, fictional detective, but Amanda and the reader discover what this means only late in the novel.

Azzopardi has made sure that this intriguing, and sometimes gripping, as well as moving, novel has women playing all of the leading roles: Emma, Amanda and Cathy, the dead novelist.

In the book we get a number of extracts from Cathy’s book, some of them being quite long, which feature the exploits and the personality of Castillo.  To these we can add Penza’s great friend and sexual partner Annie, and Ċensina, the very unsavoury Għargħur woman who has an odd way of foretelling people’s future and who probably tipped off Emma about the murderer.

The leading male character is thus the literary invention of a female novelist.  Azzopardi makes him, in some respects, a cousin of Andrea Camilleri’s Montalbano in the way that he deals with his subordinates and how he speaks to those from whom he is seeking information – and also in having a partner whom he loves but unfortunately never gets round to actually marrying.

In one of the Castillo books, Penza has even borrowed Andrea Camilleri’s plot about a clever murderer who manages to confuse Montalbano by sending him a series of rhymed puzzles.

Amanda’s father Robert, a former policeman who left the Force in some disgust during the Mintoff years, is a secondary but important character as he took Emma’s place as a caring and affectionate parent to Amanda and a very loving grandfather to Amanda’s daughter, Klarissa, when Emma left him. Perhaps Azzopardi sees someone such as  Robert as an honorary woman deserving of all respect.

Azzopardi makes Castillo (a big man, incidentally, unlike the TV Montalbano) use flippant language when nervous. Also in the many chapters not meant to be from the Castillo books, Azzopardi’s style is Maltese demotic.

She never eschews vulgar words or phrases if needed, and at one point she even makes an implied criticism of more ‘refined’ language used  by Ivo Muscat Azzopardi in his Bendu Muscat detective fiction.

She sensibly uses English words that are regularly used in common Maltese parlance and, just as sensibly, she often retains the English spelling. But there are a few exceptions, like ‘prem’ for ‘pram’ and, less fortunately, uses ‘but’ (also the Maltese word for ‘pocket’) for ‘car boot’, leading at one dramatic point toward an unintended comical effect

The main narrative is situated in 2012, but the all-important   flashbacks relate to the 1980s, in the last couple of years of the long Labour Mintoff/Mifsud Bonnici administration. The novel high-lights, through the extracts from Penza’s Castillo novels and also through  Emma’s account of the past to Amanda, the violent acts disfiguring those years.

Hints are given throughout, regarding some of the characters’ for instance when the reader is told that Annie had an important post at the Office of the Prime Minister, and was photographed with Penza and with Libya’s Gaddafi in 1976.

Penza was thus, we assume, seen as a strong Labourite, as was her creation, Castillo. In her last novel, however, published in 1985, Castillo no longer remains the good cop. He becomes an unscrupulous one when he tries to cover up the torture and killing of a man strongly suspected of placing a bomb outside Castillo’s home, incurring the great anger of the Prime Minister for the bungled attempt. Clearly, this novel shocked Penza’s Labour-leaning readers and the Police Force even more, leading Emma to alter the happy ending of her sister’s last and still unpublished Castillo novel and to publish it with an ending involving Castillo’s death. Hence, her claim that she was responsible not just for Tommy’s death but also Castillo’s.

Half way through the novel Emma disappears, leaving both her house and Penza’s papers to Amanda, who succeeds her as the amateur detective of the work.

The mystery mainly regards Penza’s death but also the person and the whereabouts of Emma’s partner, an Englishman called John. Neither Amanda nor the reader ever meet the character, and he remains a teasing puzzle.  He is a superfluous chracter who might easily have been written out of the book.

The great strength of the novel is surely in the liveliness of the many dialogues through which Azzopardi reveals again and again the personality, strengths and weaknesses of her characters.  I remember in particular a dialogue involving Amanda, along with her doctor husband Matteo and her little daughter Klarissa, which reads like a lively stage dialogue, reminding us of Azzopardi’s two theatrical successes.

Amanda having a daughter is important, as motherhood and being a daughter are at the heart of the novel. Perhaps Emma’s main aim in abandoning her family was to be close to her old mother; being a daughter was more important than being a mother, her main other love was for her dead twin sister.

For Amanda it is the opposite.  Emma has let her down greatly, but being Klarissa’s mother is all-important, for at one point she soliloquises: “Shall I promise I shall never leave you, while you promise you will never grow up?”  Amanda probably loves Matteo, but this love must always be subordinated to her motherly.

I must recommend Castillo not just to readers familiar with Maltese fiction but also to the many middle-class Maltese for whom Maltese is just a second language, and even choose to go to English-language Mass.  It is not only structured very interestingly but it also gives one the spoken language used by a good many of our fellows in this country, and it is set vividly in a Valletta of the Kamrata, Vincenti buildings and the Perfection Café and in the streets and valleys of one of my favourite villages, Għargħur.